When Speaker Paul Ryan sits down with CNN’s Jake Tapper on Tuesday night, he’ll be interviewed by a man who came to cable news stardom through a most unusual trajectory.

Tapper majored in history at Dartmouth College and didn’t even enter journalism until five years after his graduation.

{mosads}When he did, he took a significant pay cut from a public relations job to start writing for legendary Washington City Paper editor David Carr.

His first big story? A first-person account of his date with Monica Lewinsky, which took place after her affair with President Clinton but before it became public.

“She’s a very cool and tough woman considering what she’s been through,” Tapper said in an interview from his office at CNN, which features dozens of posters of failed presidential candidates. “But that ruined her life. That labeled her forever.”

Tapper still stays in touch with Lewinsky periodically via email, and the episode left him empathizing with women affected by scandal.

“And this happens to the women in these scandals in a way that’s unfair,” he continued. “Why has General [David] Patreaus been able pick up with his life, have a lucrative career consulting and this and that? And Paula Broadwell is persona non grata. Why?

“That is an odd thing for society to debate and discuss,” he said. “The woman gets the Hester Prynne letter and Reverend Dimmesdale gets to go and preach.”

Patraeus resigned as head of the CIA and later pleaded guilty to mishandling classified information by reportedly sharing it with Broadwell, his biographer. The pair had a long extramarital affair. 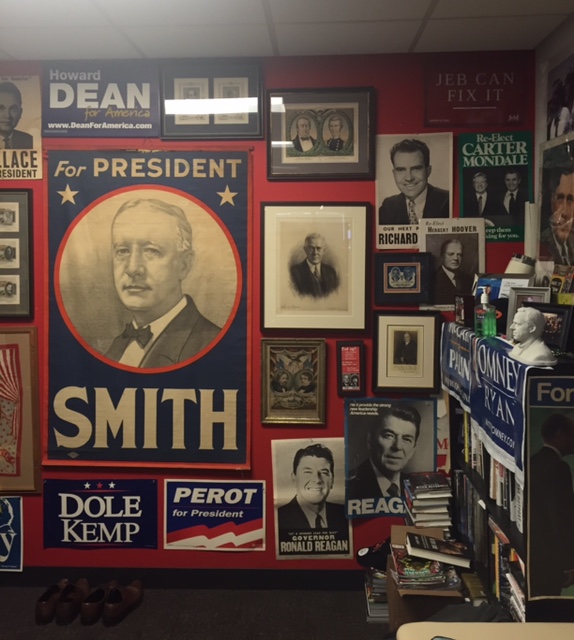 Tapper’s office in CNN’s Washington bureau features signs that are all from losing campaigns.

Tapper came to CNN in 2012 after a stint at ABC, where he served as the network’s White House correspondent and occasional “World News Tonight” and “This Week” host.

At CNN, he got his own 4 p.m. show, “The Lead with Jake Tapper,” which received critical acclaim.

The program in April was named as best newscast — network, cable or otherwise — by the prestigious National Headliner Awards. Tapper also hosts Sunday’s “State of the Union” full time.

Tuesday night’s town hall with Speaker Paul Ryan (R-Wis.), airing less than a week before the Republican National Convention, will be appointment-level television for anyone who cares how the Speaker plans to keep the GOP together with Donald Trump as its standard-bearer.

“I suspect there will be a lot of questions about policies that directly affects the voters that will participate, as well as subject No. 1 at water coolers from Portland, Maine, to Portland, Oregon: Donald Trump,” he predicted.

Tapper has interviewed the star of the 2016 cycle as much as anyone but said he isn’t suffering from Trump fatigue.

Before the CNN newsman launched down the path to asking questions of the nation’s political leaders, he went to film school in California for a year.

He then worked as a campaign press secretary for Marjorie Margolies-Mezvinsky, a Democrat who would go on to represent Pennsylvania’s 13th District. Mezvinsky is now mother-in-law to former first daughter Chelsea Clinton.

After moving to public relations, Tapper took a side job as a cartoonist.

“I must have read every Charlie Brown book until I was 10,” he said. “But I never figured out a way to make that pay the bills.”

The Lewinsky story was the first time his writing got national attention.

At the time, Lewinsky was just another young girl in Washington whom Tapper met while playing pool with friends at a D.C. bar.

Here’s an excerpt of what Tapper wrote at the time in his article titled, “I Dated Monica Lewinsky; From the tawdriest of headlines, here’s a girl I wouldn’t mind bringing home to Mom.”

“Am I drunk, or is she cute?” I asked Maloni

“You’re drunk,” said Maloni, a rugby pretty boy. I overruled him. She was cute, if a little zaftig. And friendly. And nice.

I hovered around the coral reef of the pool table for hours that night, never coming up for air. It was fine, paddling in my little eddy of indifference, waiting for others to approach me. Which Monica did. I was lining up a side shot when she stepped up and dropped three quarters onto the table, the smile now seemingly offered more specifically for my benefit.

So, ignoring the usual coy mating rituals, Monica felt free to actually be nice. Just to be nice. Maybe she wanted to meet me or someone like me. Regardless, it was refreshing. A warm patch of water in an otherwise chilly ocean. The simple act of gifting me with a few quarters after knowing me but a few minutes disarmed me.

Tapper would take out Lewinsky out at a Tex-Mex place in town a few weeks later, on Dec. 23. A “B-minus date” is the way he would describe it that ended benignly. The next time Tapper saw Lewinsky’s face, it was plastered all over every television set.

“It was six months, and I think our last episode was Sept. 8th, 2001,” Tapper recalled. “It turned out our six-month anniversary was right before 9/11. It was a six-month contract and then 9/11 happened, and that was it.”

Before getting to ABC, Tapper made a stop at VH-1, where for six months he reported on pop culture and music.