Fewer criminals were sentenced to death in 2016 than at any time in the more than four decades since the Supreme Court reinstated the use of the death penalty, a new sign that states, prosecutors and judges are moving away from capital punishment.

Only 30 convicted criminals were sentenced to death in 2016. That’s 39 percent lower than the number of death sentences handed out in 2015, which was already a record low since 1972, when the high court once again allowed states to put prisoners to death.

{mosads}Just five states — Florida, Texas, Alabama, Georgia and Missouri — implemented the death penalty in 2016. No more executions are scheduled between now and the end of the year. Of the 20 men put to death this year, 16 were white, two were black and two were Latino.

Five of the seven executions carried out in Texas this year were of white men. Two were of Latino men. For the first time since 1982, Texas did not execute any African American convicts.

The declining use of the death penalty come as states reconsider the cost and efficiency of executing prisoners.

Budget hawks in some states have concluded that the total cost of putting a prisoner to death is greater than the cost of incarceration for life, while studies show the penalty is disproportionately imposed on African American convicts. 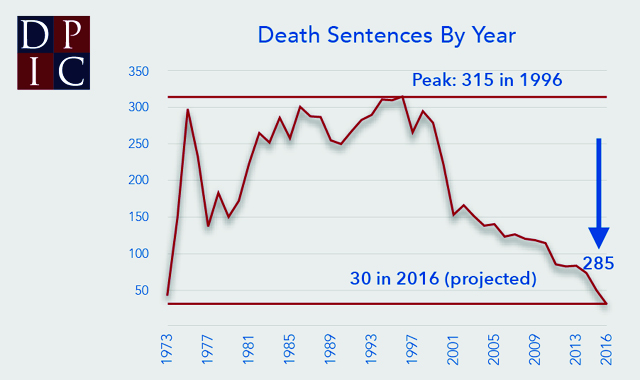 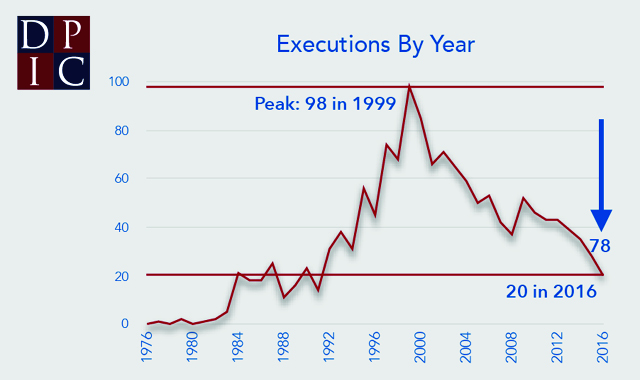 In other cases, states have had to delay or suspend executions as they run out of the drugs necessary to conduct lethal injections. Pharmaceutical companies, especially those based in Europe, have refused to provide states with drugs needed for lethal injections.

“America is in the midst of a major climate change concerning capital punishment,” said Robert Dunham, executive director of the anti-capital punishment Death Penalty Information Center, which compiled the statistics in its year-end report.

“Whether it’s concerns about innocence, costs and discrimination, availability of life without parole as a safe alternative, or the questionable way in which states are attempting to carry out executions, the public grows increasingly uncomfortable with the death penalty each year,” Dunham said.

At the same time, President-elect Donald Trump has promised to use the death penalty more often, especially for those convicted of murdering police officers.

Trump did not say what he meant. A president would not be able to implement specific sentences through executive order, especially for non-federal crimes.

Only three people since 2001 have been executed through the use of the federal death penalty. That last was in 2003, according to the Death Penalty Information Center.

Most Americans say they favor the death penalty for someone convicted of murder, though even that number is slowly dropping.

California voters this year rejected a ballot measure that would have ended the death penalty and approved another measure that would limit appeals and expedite executions. The state Supreme Court this week placed a stay on that measure, Proposition 66, without setting a timetable for its implementation.

Other legislatures are expected to take up measures to end the death penalty in the coming legislative session. Senior Nevada Democrats, who took over control of the state House and the state Senate in November’s elections, have said they will advance a bill to roll back the death penalty. Utah, where Republicans remain in control, has considered a death penalty repeal in recent years too.

Nineteen states and the District of Columbia have eliminated the death penalty already. Democratic governors in Colorado, Oregon, Pennsylvania and Washington have issued executive orders halting the progress of death penalty cases, though inmates are still on death row. Delaware’s Supreme Court ruled last week that the sate’s death penalty law is unconstitutional.

The falling application of the death penalty has coincided with plunging crime rates, which are at or near all-time lows. In 1999, when crime rates were much higher, states executed 98 prisoners, nearly five times as many as have been executed this year.

Connecticut, which abolished the death penalty last year, is the only state in the union with an empty death row.

Seventeen prisoners are scheduled to die in 2017, according to the Death Penalty Information Center, in five states. Seven more condemned criminals have received stays halting their sentences, at least temporarily.