Share Tweet
More
Share
Twitter
Facebook
LinkedIn
Whatsapp
Email
A strong majority of Americans say Democrats should look to cooperate with President Trump to strike deals, according to the inaugural Harvard-Harris poll provided exclusively by The Hill.
The survey found that 73 percent of voters want to see Democrats work with the president, against only 27 percent who said Democrats should resist Trump’s every move.
The findings are significant as Democratic leaders in Congress are under growing pressure by their liberal base to obstruct the president’s agenda. The poll shows the party is divided on how to deal with Trump: 52 percent of Democrats polled say they should cooperate with him on areas of agreement and 48 percent saying they shouldn’t.
Those figures are nearly identical when the question is flipped – 68 percent of those polled say that Trump should be willing to compromise and find ways to work with Democrats in Congress. Thirty-two percent said Trump shouldn’t bend at all, even if it means finding ways to achieve his agenda without congressional approval.
{mosads}Republicans are similarly divided here, with 48 percent wanting compromise and 52 percent saying Trump should be unwavering.
“This shows that voters want Trump and Democrats to compromise and if they don’t, they both may pay a heavy price with the electorate,” said Mark Penn, the co-director of the Harvard-Harris poll.
The Hill will be working with Harvard-Harris throughout 2017.
Senate Democratic Leader Charles Schumer (N.Y.) has said he’s hopeful he can work with Trump on issues where there is bipartisan overlap, like on trade, infrastructure spending, rebuilding the nation’s inner cities, and closing the “carried interest” tax loophole.
The chances of bipartanship this year appear dim. More than 60 House Democrats boycotted Trump’s inauguration and GOP leaders in Congress don’t anticipate much, if any, help from the other side of the aisle. 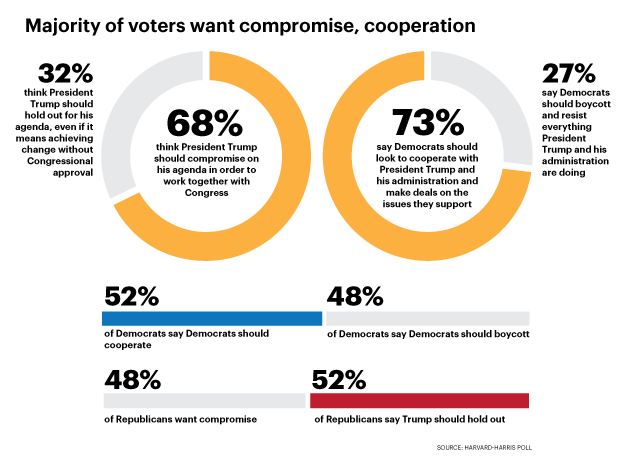 While liberals are furious at the Trump administration for ramping up deportations of illegal immigrants, some Democrats were encouraged that Trump this week struck a softer tone in discussing children brought into the country illegally through no fault of their own.
However, Trump’s broader agenda of repealing the Affordable Care Act, slashing spending, rolling back regulations and cracking down on immigration are anathema to Democrats, who are growing more entrenched in opposition to the president with each passing day.
Conversely, Trump has been frustrated with the Senate for the slow pace of confirmations for his Cabinet nominees. The president feels Democrats are out to sink key figures in his inner circle, such as former national security adviser Michael Flynn, who resigned this week amid controversy. Trump’s pick for Labor secretary, Andy Puzder, also withdrew his nomination this week under fire from Democrats and some in the GOP.
Trump and his team feel under siege by civil servants and many in the Intelligence community, who he blames for damaging leaks meant to embarrass and undermine his administration.
Still, a majority of Americans – 50 percent – said they believe Trump will be effective in implementing his agenda, against only 40 percent who said he would fail.
While Trump entered the White House with a historically low approval rating, leading many Democrats to question his mandate to govern, the Harvard-Harris poll put him at a respectable 45 percent favorable and 51 percent unfavorable.
Forty-eight percent said they approve of the job Trump is doing, compared to 52 percent who say they disapprove.
Trump has a better approval rating than Republicans in Congress, who post a 43-57 split, or Democrats, who came in at 41 positive and 59 negative.
The online survey of 2,148 registered voters was conducted between Feb. 11 and Feb. 13. The partisan breakdown is 39 percent Democrat, 30 percent Republican, 27 percent independent and five percent other.
Tags Charles Schumer
Share Tweet
More
Share
Twitter
Facebook
LinkedIn
Whatsapp
Email