Union membership has fallen to a record low, according to numbers released Friday by the Bureau of Labor Statistics (BLS).

The numbers show that the percent of wage and salary workers who are members of unions fell to 10.5 percent in 2018, the lowest number recorded since BLS began tracking the statistic. Some 14.7 million workers belong to unions, compared to 17.7 million workers, or about 20.1 percent of the workforce, in 1983, the first year for which comparable union data are available.

Meanwhile, the gap between union membership for men and women declined to about 1 percentage point, 11.1 percent vs. 9.9 percent, down from about 10 points in 1983.

Among major race and ethnicity groups, African-American workers continued to have a higher union membership rate in 2018 than white, Asian or Hispanic workers. Union membership remained highest among the 45-64 age group. 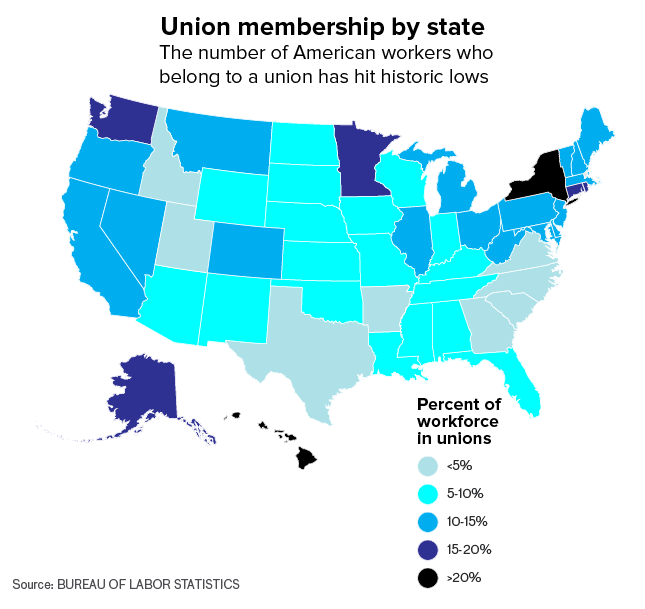 Labor unions repeatedly found themselves in headlines in 2018. The Supreme Court approved a national right-to-work law, which allows workers to receive the benefits of union contracts without having to pay dues, on all public sector employees.

Teachers across the country, many leveraging on their unions, have protested for increased wages and better classroom conditions.

Additionally, according to a 2014 Georgetown University study, demand for workers with a college education is on the rise, while employees without such degrees historically made up strong portions of union memberships.

The public has had an increasingly positive view of labor unions in recent years. A 2018 Gallup poll showed that 62 percent of Americans approve of labor unions today, a 15-year high.

“Momentum is on our side. Public support for unions is at its highest level in 15 years, and elected officials nationwide are embracing unionism as the key to unrigging an economy that overwhelmingly favors the privileged and powerful over working families. Our challenge now is to make it easier for working people to join unions—the one way for workers to get the dignity and respect they deserve,” American Federation of State, County and Municipal Employees President Lee Saunders said in a statement.
Tags
Share Tweet
More
Share
Twitter
Facebook
LinkedIn
Whatsapp
Email