Poll finds both Republicans and Democrats describe Trump as ‘self-centered’

A new poll from Pew Research Center finds that the vast majority of both Republicans and Democrats view President Trump as “self-centered,” with the poll also finding that just 15 percent of American adults approve of the way the president conducts himself in office.

When surveying 6,395 U.S. adults in February, researchers asked respondents if they “don’t like,” “like” or have “mixed feelings” on the way Trump conducts himself as president.

Overall, a majority 53 percent of respondents said they disliked Trump’s conduct while in office. An additional 30 percent reported having mixed sentiments toward his conduct, and the remaining 15 percent minority said they approve, or “like,” his conduct as commander in chief. 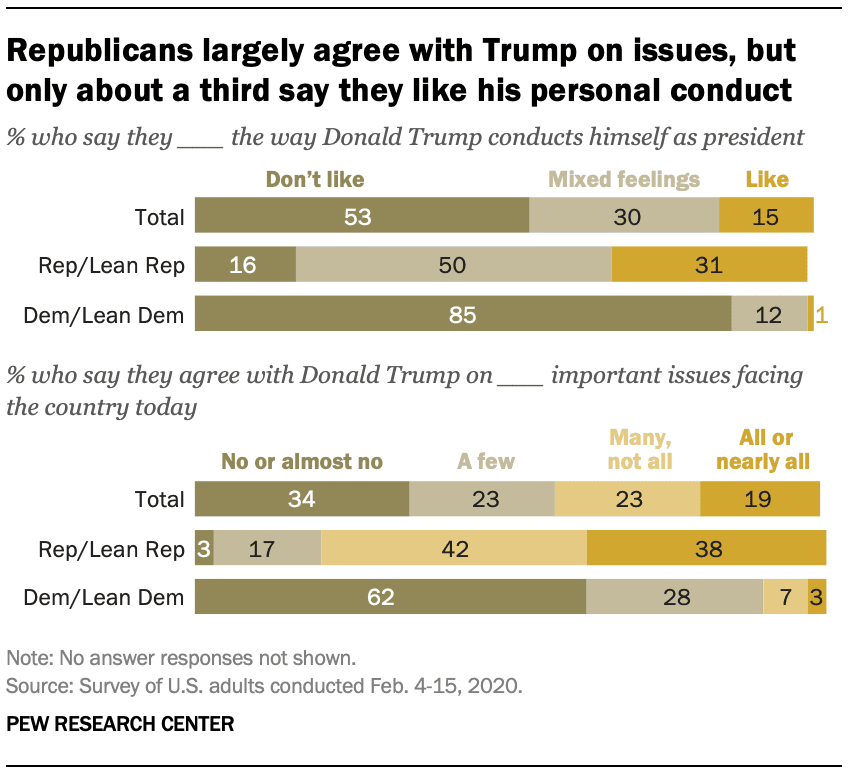 While most of the answers were split along party lines, Democrats and Republicans did find some common ground.

Overall, 80 percent of respondents find the president to be “self-centered.”

Respondents from the two parties gave different answers on other questions.

Fifty percent of Republican or Republican-leaning respondents said they have “mixed feelings” toward Trump’s conduct, while 31 percent say they approve or like his behavior in office.

But Republicans, even if they have mixed feelings about Trump’s conduct, give Trump good marks on his policies. Eighty percent say they agree with Trump on his take on the country’s most pressing issues.

Other discrepancies in Republican perceptions of Trump are found in specific subgroups. Republicans or Republican-leaning independents at or older than 65 tend to view the president more favorably, with 38 percent reporting they like his conduct.

Thirty-two percent of respondents in the next oldest group, ages 50-64, approve of his conduct as president. As the Republican and Republican-leaning respondents get younger, the less they report liking Trump’s conduct.

Democrats are more unified in their responses, with a slim 12 percent reporting mixed feelings about Trump’s conduct, and only 1 percent reporting liking his behavior. A solid 62 percent do not agree with Trump on important national issues, while 10 percent of Democrat and Democrat-leaning respondents agree with Trump on important issues facing the country.

Similarly, 71 percent of Republican or Republican-leaning respondents describe Trump as “honest,” as opposed to only 7 percent of Democrat or Democrat-leaning independents. 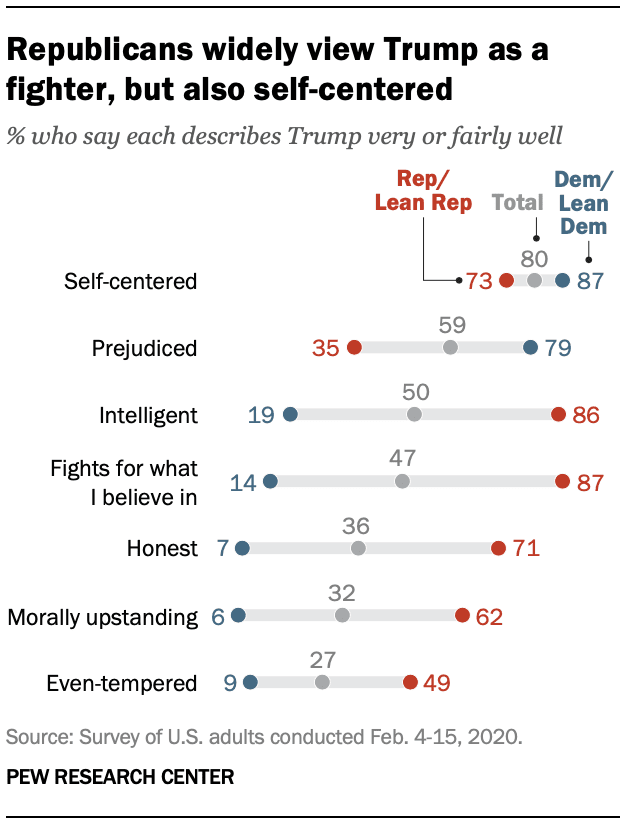 The survey was conducted Feb. 4-15 via web surveys and has an overall margin of error of 1.59 percentage points.