Living statues were installed around Washington, D.C. on Friday depicting President Trump as a “destroyer of civil rights and liberties.”

A group of artists known as the Trump Statue Initiative is behind the installations, including one that depicts Trump holding up a Bible while Black Lives Matters protesters are beaten and another showing him telling a masked child to “go back to school” while holding a golf club.

“The concept is that the history he’s painting of himself right now, where his narcissistic or racist or self-serving moments abound, this is what he’s leaving us with,” filmmaker Bryan Buckley told The Hill. Buckley, who was nominated for an Oscar this year, curated the three installations that went up around D.C. on Friday.

The initiative spent the morning depicting Trump atop a stand that reads “destroyer of civil rights and liberties” at Liberty Plaza. That “statue” was inspired by police violently clearing protesters out of Lafayette Square, near the White House, in June before Trump posed for photos in front of St. John’s Episcopal Church holding up a Bible.

Buckley called it “his defining moment as president.”

“That sort of spurred on the concept,” he said. He noted that statues are also “top of mind” at the moment, due to the national conversation around tearing down those depicting Confederate leaders and other figures associated with slavery.

Another installation in Freedom Plaza on Friday depicted Trump sending a child back to school amid the coronavirus pandemic. 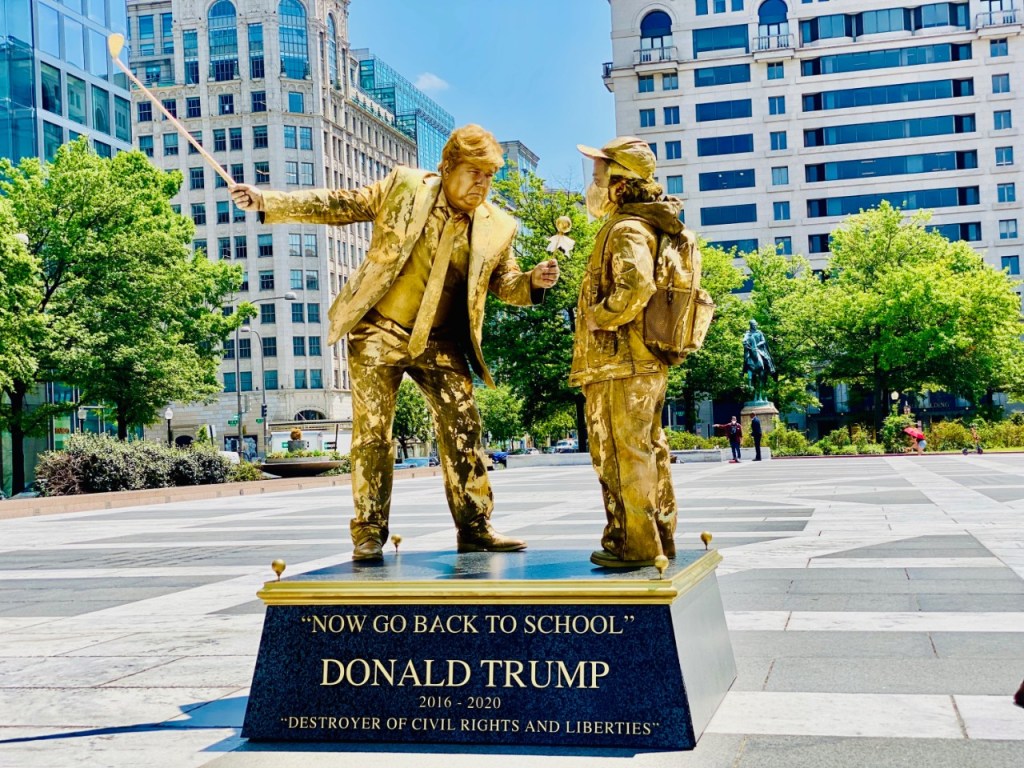 The third is placed in front of Trump’s D.C. Hotel and shows Trump holding a teddy bear and watching Fox News in a bunker. Trump was briefly taken to an underground bunker amid protests near the White House in May, although he later said he was inspecting it.

“We’re hoping with this initiative, we will inspire other street performers, other artists to follow suit, whether across the country in swing states or conventions, that we really start to show these moments in statue form that show what we’ll be living with [if Trump wins reelection],” Buckley said.

He said the group urges pedestrians who stop to engage with the “statues” to register and vote.

The group, which officially launched Friday, plans to take its art on the road to more cities, as well.

“This is an ongoing effort,” Buckley said. “We’ll sort of venture into less friendly areas soon.”

Why some aren’t buying Democrats’ ‘go vote’ message on abortion