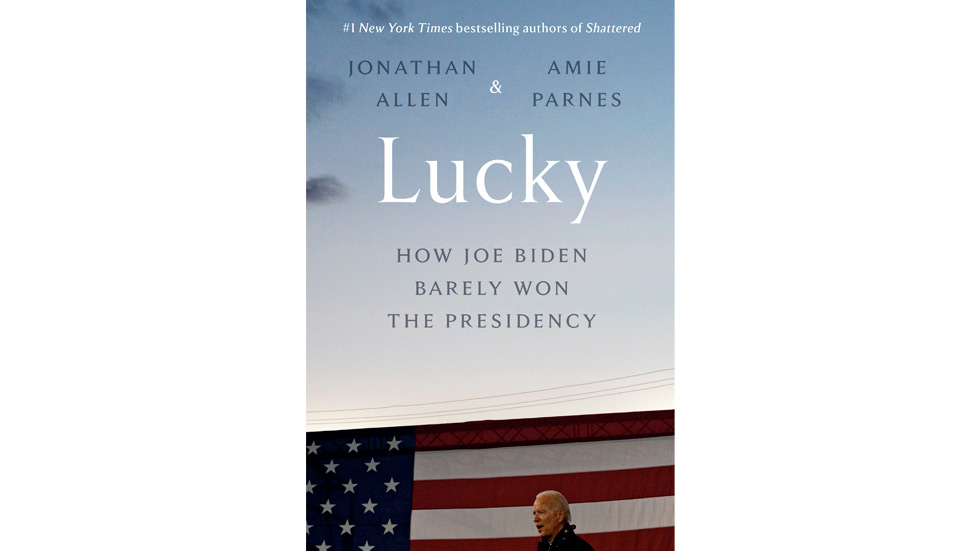 House Majority Whip James Clyburn (D-S.C.) says President Biden’s vow to put a Black woman on the Supreme Court was a key turning point in his bid for the White House, according to an exclusive excerpt from “Lucky,” an upcoming book authored by The Hill’s Amie Parnes and NBC News’s Jonathan Allen.

Clyburn discusses the importance of the moment Biden made the commitment during a February debate between the Democratic presidential candidates.

The following is an excerpt from “Lucky: How Joe Biden Barely Won the Presidency,” which is set to be released on March 2 and is available for pre-order.

Jim Clyburn had heard enough—or, really, not enough. The House Democratic whip pushed himself out of his seat at Charleston’s Gaillard Center concert hall. He dashed for the exit with the urgency that friends recognized as a seventy-nine-year-old man’s hurry to find a restroom. But Clyburn didn’t need to pee. He needed to find Joe Biden—and fast—before the end of a commercial break during the CBS News/Congressional Black Caucus Institute debate.

It was February 25, four days before the South Carolina primary, and Biden was blowing it again. Almost an hour and forty-five minutes had passed already, and Biden hadn’t mentioned the one promise Clyburn had said would nail down Black votes in South Carolina, throughout the rest of the primary, and in the general election.

Clyburn was shocked, but not stunned. He made a beeline for the backstage area. Pete Buttigieg approached to greet the most powerful Democrat in South Carolina politics. Clyburn brushed Mayor Pete aside. His eyes darted around, and he finally found Biden.

They huddled together out of earshot of the other candidates. There wasn’t much time until Biden had to be back onstage for the final segment of the debate.

“You’ve had a couple of opportunities to mention naming a Black woman to the Supreme Court,” Clyburn lectured his friend of nearly half a century, like a schoolteacher scolding a child. “I’m telling you, don’t you leave the stage tonight without making it known that you will do that.”

Biden had seemed to get it the night before, when Clyburn talked to him at a Congressional Black Caucus reception aboard the USS Yorktown, a decommissioned aircraft carrier that sat in Charleston Harbor as part of a naval museum.

Biden was desperate to get Clyburn’s endorsement. Very few endorsements carry weight in modern politics. In South Carolina, though, a perception had built up that Clyburn’s imprimatur meant everything. Voters believed it, the media believed it, and even most political insiders thought there was at least a good helping of truth in it. There was no Black political figure in the history of the state who had more influence with Black voters in South Carolina or across the Deep South.

Clyburn wanted to endorse Biden. In fact, he had no intention of endorsing any other candidate. But he could also see how badly the wheels had come off Biden’s campaign, and he was a savvy enough politician to know that there wasn’t much point in endorsing someone who was going to lose. He also knew he would have more leverage with Biden before an endorsement than after one.

By the time they gathered on the Yorktown the night before the debate, Biden was still waiting for the final word from Clyburn.

“I’m going to endorse you the morning after” the debate, Clyburn said. “But my endorsement ain’t going to mean much, just to be frank, if you flame out in the debate.”

Clyburn still wasn’t sure that his endorsement would be enough of a lift for Biden. There were two questions hanging over Biden’s head at that point: whether he would win the state and whether he would win by a margin large enough to signal to the rest of the country—and specifically to Black voters in the states voting three days later on Super Tuesday—that he was alive and kicking.

“We were in jeopardy of it being too close,” said one top Biden aide.

On the Yorktown that night, Clyburn and a few of his CBC House colleagues offered Biden counsel and made what amounted to a political ask—the favor a politician requests in return when he is granting one. “Find a way to say that you were a part of picking the first Latina woman member of the United States Supreme Court and you’re looking forward to making the first African American woman a member of the United States Supreme Court,” Clyburn instructed.

The meeting was fresh and front of mind for Biden the next day, as he prepared for that night’s debate. He understood the difference between a narrow victory and a blowout: his margins with Black voters. If he committed to naming a Black woman to the Supreme Court, that might give him a lift. It would also help him with the CBC, meaning he could get a boost in delegate-loaded Black-majority districts across the country.

“I think I should do it,” he told his advisers.

“Don’t do it,” Symone Sanders replied, speaking in concert with the group. If he wanted to do it at some point, his advisers agreed with one another, he should make a carefully considered plan around announcing that. It wasn’t the kind of thing he should just throw out there on a debate stage. Besides, it might look like he was pandering and backfire. Biden was torn.

But Clyburn and his CBC colleagues believed their message had landed. And so, the next night, as Clyburn watched the debate unfold and didn’t hear the words come out of Biden’s mouth, he grew more and more frustrated. One opening, two, then three—Biden kept looking at flat, belt-high fastballs down the middle of the plate and leaving his bat on his shoulder. Why won’t he say it? Clyburn asked himself. Finally, he took matters into his own hands at the commercial break.

Backstage, Biden looked his friend in the eye and nodded his assurance. Clyburn returned to his seat to watch the end of the debate.

In his closing remarks, Biden fumbled out the promise. “Everyone should be represented,” he said in answer to a question about his personal motto and the biggest misconception about him. “The fact is, what we should be doing—we talked about the Supreme Court. I’m looking forward to making sure there’s a Black woman on the Supreme Court, to make sure we in fact get every representation.”

The crowd burst into applause.

“Not a joke,” Biden said awkwardly. “I pushed very hard for that.”

What? Clyburn thought. Biden hadn’t already gotten a Black woman named to the court. He was supposed to say he had supported the nomination of the first Latina on the high court, Sonia Sotomayor, and then transition smoothly to promising to name the first Black woman. It wasn’t that hard.

But it was good enough, Clyburn thought.

The morning after the debate, Clyburn rose early and met up with Biden at Trident Technical College in North Charleston for a National Action Network breakfast. Technically, Clyburn was there to receive a leadership award from the NAN, a civil rights group founded by Al Sharpton. Clyburn didn’t know that the new NAN award had been named in honor of his late wife until he received it, and the tribute made him emotional.

At the end of the breakfast, Clyburn, Biden, and various elected officials moved to an auditorium at the school. They walked in to the strains of Jackie Wilson’s “(Your Love Keeps Lifting Me) Higher and Higher.” The music stopped as Clyburn stepped up to a microphone bedecked with a Biden sign.

Six hundred fifty miles north on I-95, activity in Biden’s Philadelphia headquarters came to a halt. All of the cable networks were carrying the announcement live. This was big. Staffers fixed their eyes on monitors around the office as Clyburn began to speak in North Charleston. Everyone knew Clyburn would endorse, but not what he would say. Would it be full-throated? Tepid? Even Clyburn’s people weren’t sure.

His voice cracking, Clyburn mentioned the award named for his wife. “There’s nobody who Emily loved more in this country, as a leader, than she loved Joe Biden.”

Then he unspooled a story about attending his pastor’s funeral the previous Friday. An elderly woman, sitting in the front pew, had beckoned to him with her index finger. She asked him to lean down, and he did. She told him the community needed to hear from him about who he intended to vote for.

“I decided right then and there that I would not stay silent,” Clyburn said. “I want the public to know that I’m voting for Joe Biden. South Carolinians should vote for Joe Biden.” Clyburn said his own challenge as a public servant is “making the greatness of this country accessible and affordable for all” and that no one he’d ever worked with was more committed to that than Biden. And then, with his voice breaking again, he introduced Biden by calling him “my late wife’s great friend.” Clyburn wrapped his arms around Biden—literally, as Biden would say—creating a picture-paints-a-thousand-words image for local and national media outlets.

It was powerful enough to be felt back in Philadelphia, where Biden’s headquarters team celebrated a new experience: an unmitigated public relations victory.

Inside Biden’s campaign, there was a sense that, for the first time in ten months, the political winds had shifted away from his face. For all of the breaks that had gone Biden’s way, there had been only sporadic interruptions in a firestorm of failure. He had survived getting in the race late, campaign infighting, pathetic fundraising, and finishing fourth, fifth, and a distant second in the first three states on the primary calendar. He had benefited from the spiking of the Iowa poll, the caucus debacle, debate-night drubbings of Buttigieg and Bloomberg in consecutive states, and so much more.

And yet the Clyburn endorsement was different from the rest: Biden had worked for it over the course of years—developing a relationship with Clyburn and his late wife, tending to a Charleston dredging project as vice president, and visiting the state for as long as he could remember.

He had done what Clyburn asked him to do at the previous night’s debate after they huddled backstage during a commercial break. He hoped that the endorsement would give him enough of a margin that the media, the donor class, and the reluctant party influencers would treat him like a real winner for the first time since his launch. It was impossible to know exactly where the line of demarcation for a “big enough” win sat, but he had three days left to work harder and, perhaps, get a little luckier.

Excerpted from LUCKY: How Joe Biden Barely Won the Presidency. Copyright © 2021 by Jonathan Allen and Amie Parnes. All rights reserved. Published in the United States by Crown, an imprint of Random House, a division of Penguin Random House LLC, New York.