The senators who are most likely to reject President Trump’s nominees are the very ones who want to challenge him in 2020.

At the same time, Republicans voted virtually in lockstep for Trump’s nominees; the average GOP senator backed 99 percent of his picks, and the one who went rogue most often — Sen. Rand Paul (R-Ky.) — still voted to confirm 93 percent of his nominees.

{mosads}Trump’s picks to fill positions in his administration and the judiciary illustrate an increasingly partisan divide in the Senate between Republicans who vote to confirm almost every nominee and Democrats who reject the vast majority.

The average Democrat has voted to confirm just 38 percent of Trump’s nominees.

And that number has been falling in recent months.

In the 115th Congress, the average Democrat backed roughly 39 percent of Trump’s nominees. In the first six months of the 116th Congress, that number fell to 34 percent, according to data provided by Quorum Analytics, a public affairs data firm.

This year, leading the charge against Trump’s nominees are many of the candidates who are running against him in 2020.

Sens. Kamala Harris (D-Calif.) and Cory Booker (D-N.J.) have voted in favor of 17 percent and 15 percent of Trump’s nominees, respectively. Sen. Amy Klobuchar (D-Minn.) has voted to confirm 38 percent of those nominees, putting her in line with the average Senate Democrat. 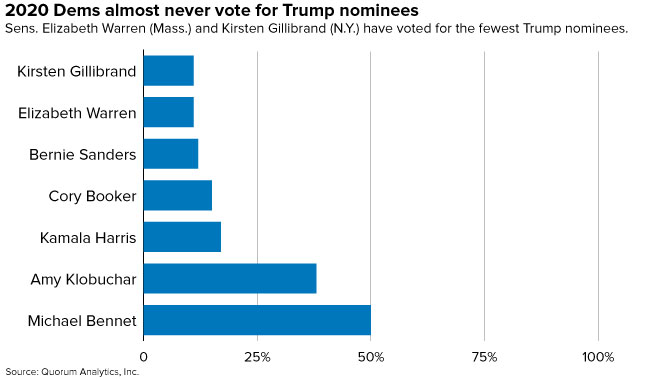 But in what may be a sign of just how important opposing Trump is to the Democratic base, Klobuchar’s voting record changed noticeably in the run-up to her decision to enter the presidential field. In the 115th Congress, she voted to confirm 84 of Trump’s 180 nominees, or about 47 percent. In this Congress, she has voted to confirm fewer than one in 10 nominees.

“For people who seek the nomination, opposing Trump and in particular conservative judges will be a positive for party activists,” said Sarah Binder, a political scientist at George Washington University and a senior fellow at the Brookings Institution.

Sen. Michael Bennet (D-Colo.), another 2020 contender, has voted to confirm half of Trump’s nominees, more than all but seven other members of the Democratic caucus.

Those seven members who have voted to confirm more than half of Trump’s nominees reflect the centrist flank, whose ranks were thinned in 2018 when former Sens. Heidi Heitkamp (D-N.D.), Claire McCaskill (D-Mo.) and Joe Donnelly (D-Ind.) all lost their reelection bids.

The centrist coalition is anchored by two Democrats who won reelection in red states last year: Sens. Joe Manchin (D-W.Va.) and Jon Tester (D-Mont.). Manchin has voted to approve three-quarters of Trump’s nominees. Tester has voted for 55 percent of those nominees.

Paul, the Republican outlier, has voted against 16 Trump nominees, more than any other member of his party.

The partisan divide over presidential nominations reflects a long-term trend toward what activists in both parties see as increasingly high-stakes positions.

The vast majority of nominations confirmed by the Senate in the first two centuries of American history did not even require roll call votes, because significant opposition was so rare, said Binder.

But in the past three decades, those roll call votes have become increasingly frequent as judicial nominees in particular became important to party activists, first on the Republican side and now among Democrats too.

“We don’t often have recorded roll call votes routinely until you hit the ’90s, when you had Republican reactions to [former President] Clinton’s nominees,” Binder said. “There was much less opposition. Not to say that there was no opposition, but judges hadn’t become such a cause for Republicans.”

The Trump administration has faced a particularly divided Senate, in part because Trump nominated so few candidates for low-level and noncontroversial positions, said Terry Sullivan, a political scientist at the University of North Carolina and executive director of the White House Transition Project, a nonpartisan advisory group.

Trump offered fewer nominees in his first two years in office than former Presidents Reagan, Clinton and Obama did in their first 12 months. He also announced and then withdrew more nominees than the last five presidents combined. Those he did nominate tended to be for more high-profile positions that are more likely to start partisan fights.

But the polarization of the nominating process long predated Trump. It has been exacerbated in recent years as separate Senate majorities have changed the rules to reduce the number of votes a given nominee needs to achieve to advance, Sullivan said.

The most recent rules change, lowering the threshold at which Supreme Court nominees could reach cloture, further removed incentives for any administration to reach bipartisan consensus.

“In order to get some nominees through the process that would previously not [have] managed to get through, the Senate majority has taken a dramatic swing to the right, moving the average Senate confirmation much closer to its own right wing and away from the majoritarian middle among the Senators,” Sullivan said.

US shoots down suspected Chinese spy balloon off Carolina coast