A decade ago, North Dakota’s economy rose and fell with crop prices. Today, the state is so heavily dependent on oil harvested from the Bakken formation that nearly a third of its exports come in the form of crude oil, shipped off to refineries in other parts of the country.

{mosads}That data comes from U.S. Census Bureau figures analyzed by the American Enterprise Institute, which sheds light on just how dependent some states are on their largest industries. And it offers hints about why state lawmakers act the way they do. 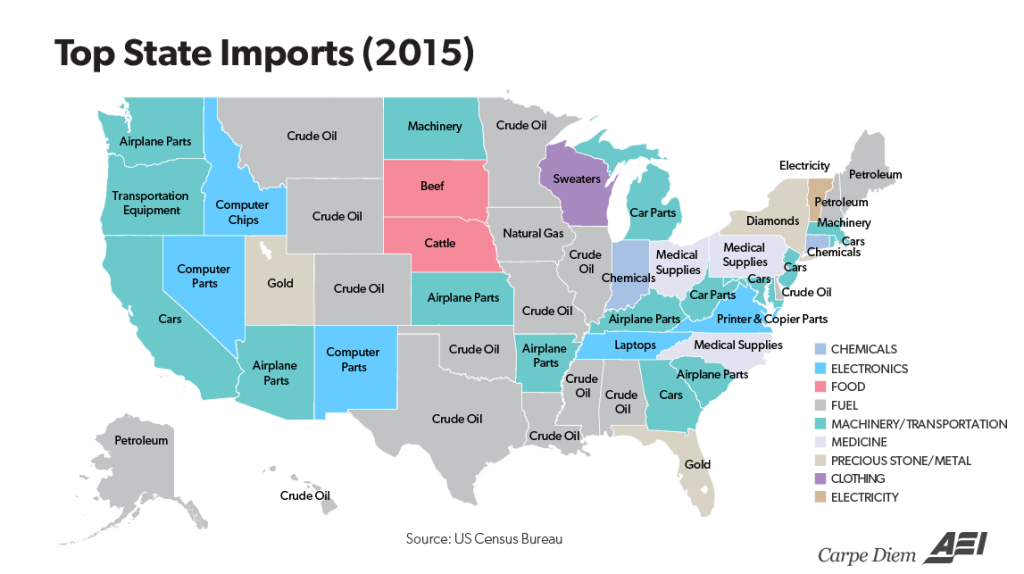 Consider Washington, where a few years ago Democrats and Republicans joined together to give Boeing the largest single corporate tax break in American history, a deal worth more than $8 billion over four decades.

Why does Boeing carry so much heft in the Evergreen State? Not only does the company employ tens of thousands of workers at factories north and south of Seattle, but completed aircraft account for almost 60 percent of Washington’s exports.

In 2015, Washington businesses exported $86 billion in products, according to the Census Bureau. Of that amount, slightly more than $51 billion in trade came from civilian aircraft and engine parts.

(Boeing’s reach extends into other states, too: Airplane parts account for the largest source of imports in Kansas and South Carolina, two states where Boeing operates production lines.)

Alaska remains heavily dependent on fish for its export economy. The state exported just over $4.6 billion in products in 2015, almost half of which came from pollock, salmon, cod, crab and other seafood products.

Nebraska’s economy is also dependent on food production. In 2015, the last year for which figures are available, the state imported $202 million in live cattle; it turned those imports into its largest export, $965 million in fresh or frozen beef.

And in New York, a significant portion of the export market comes from luxury goods. Among the top items the Empire State shipped overseas in 2015 were diamonds, paintings, gold, jewelry, original sculptures and statuary — and even antiques exceeding 100 years of age.