The 10 lawmakers who have held the most in-person town hall meetings over the last two years are all Republicans.

And 24 of the 28 lawmakers who have held the most town halls, according to records maintained by the independent site Legistorm, are Republicans.

Protests at town hall meetings by those defending the Affordable Care Act have led some lawmakers to pare back or cancel their in-person events.

Critics of President Trump and people worried that ObamaCare’s repeal could leave them without health insurance have shouted, jeered and asked tough questions to a number of Republican lawmakers, earning headlines and cable news coverage in the process.

Rep. Jason Chaffetz (R-Utah) and Sen. Tom Cotton (R-Ark.) both came under fire at recent events, while Rep. Tom McClintock (R-Calif.) had to be escorted out of one raucous gathering by local police.

Democratic activists and those who support ObamaCare have castigated Republicans for skipping town hall meetings during the February recess, when more than 200 members of Congress did not hold in-person town hall events.

Some of those who faced their angry constituents dismissed protesters as little more than paid instigators. Chaffetz, chairman of the House Oversight and Government Reform Committee, called those who showed up at an event in Salt Lake City “a concerted effort in part to just cause chaos.”

White House press secretary Sean Spicer called the protesters a “very paid, AstroTurf-type movement,” though he gave no evidence that any of the protesters had been paid to show up. 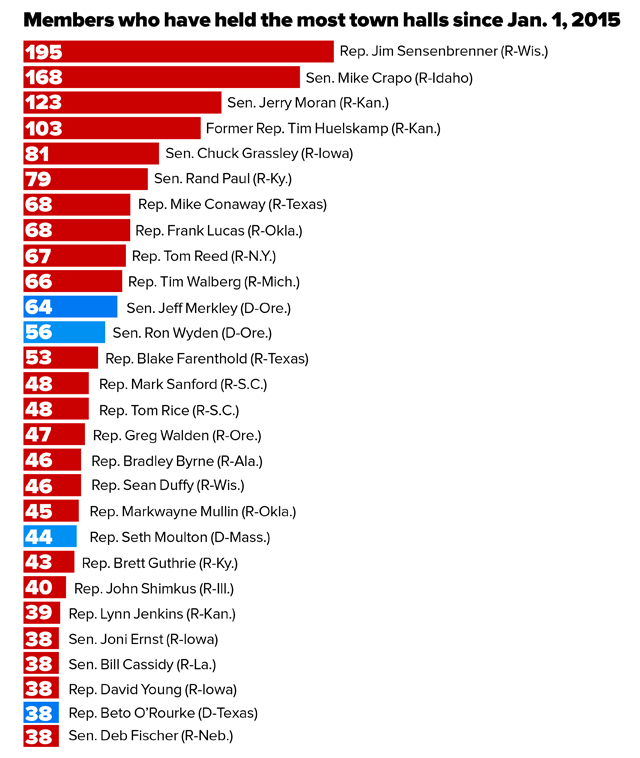 The Legistorm data shows that most of the members holding dozens and dozens of town halls are in the GOP.

Among the 50 members of Congress who have held the most in-person town hall meetings over the last two years, 39 are Republicans.

The more recent reluctance of national Republicans to appear at town hall meetings recalls the summer of 2009, when voters’ anger over Democratic efforts to overhaul healthcare in the midst of the recession led to heated confrontations that played in an endless loop on cable television networks.

Some Democrats dismissed those efforts, too, as paid protest movements. Republicans won back control of the House of Representatives the following year.

Kemp’s political clout grows ahead of 2024