More voters cast ballots in November’s elections than when President Obama won reelection in 2012, though the number of Americans who showed up to vote remains well below all-time highs set half a century ago.

About 139 million Americans, or 60.2 percent of the voting-eligible population, cast a ballot in November’s elections, according to data compiled by the U.S. Elections Project. That compares with 58.6 percent of eligible voters who turned out in 2012, but it’s below the 62.2 percent who turned out to help elect Obama for the first time in 2008.

{mosads}Last year, President Trump won just shy of 63 million votes — enough to secure a majority of the Electoral College, even though he fell almost 3 million votes shy of his Democratic opponent, Hillary Clinton. 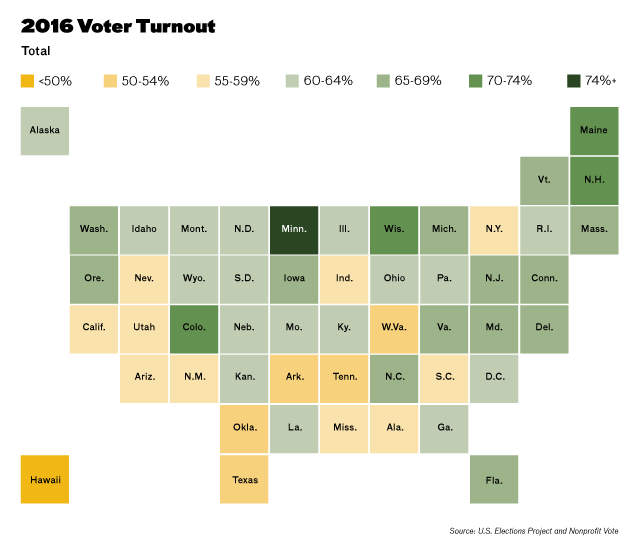 Nearly 3 in 4 voters in Minnesota turned out to vote in November’s elections, a rate higher than in any other state. Last year marked the eighth time in the past nine elections that Minnesota notched the highest turnout in the nation. Clinton won the state’s 10 electoral votes by a slim 45,000-vote margin.

More than 70 percent of voters turned out in Maine, New Hampshire, Colorado and Wisconsin, all states where both presidential campaigns invested heavily. Turnout hit 69 percent in hotly contested Iowa, and more than two-thirds of voters cast ballots in Massachusetts, Oregon, Maryland and Virginia.

Researchers from the group Nonprofit Vote, which promotes voter participation and policies that will increase turnout, said states where more people showed up shared one of two similarities: They were either battleground states, or they allowed voters to register and cast ballots on the same day. 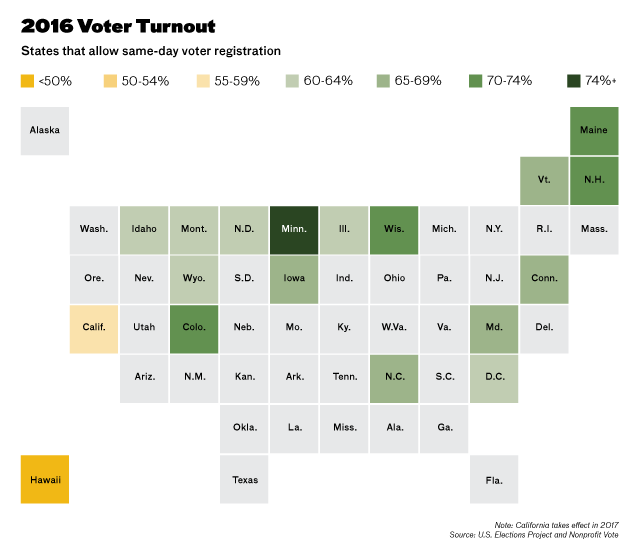 “People in those nonbattleground states, they know their vote doesn’t really matter, so they’re less likely to turn out,” said Brian Miller, executive director of Nonprofit Vote. “States where there’s a meaningful choice, where there’s real competition, folks are more likely to go out and vote.”

The two parties are increasingly focusing their attention on the small handful of states they see as competitive in presidential elections. More than half of the campaign stops Clinton and Trump made between July 19 and Nov. 7 — 57 percent — were in just four states: Florida, North Carolina, Ohio and Pennsylvania.

And the campaigns spent 71 percent of their money in those four states, which all went for Trump on Election Day.

The lack of competition manifests in races beyond the presidential contest: Only 33 races for seats in the House of Representatives, less than 10 percent, were decided by 10 points or less.

Nearly three-quarters of all House races were decided by more than 20 points, a sign that partisan gerrymandering enacted by both Republican and Democratic state legislatures has dramatically reduced the number of truly competitive districts.

Voter turnout in 2016 was the second-highest in the past half-century, after the 62.2 percent who turned out in 2008. Voter turnout topped 62 percent in all three presidential contests held in the 1960s, the most recent surge in voter participation.

Voter turnout most recently topped 65 percent in 1908, though among a much smaller population: Women did not get the right to vote until 1920.

George Pillsbury, a consultant to Nonprofit Vote, said the most significant barriers to higher turnout are registration deadlines that require voters to sign up weeks — and in some states, up to a month — before Election Day. While Democrats and Republicans have argued over election law reforms such as requiring voters to show an identification at the polls, those early signup deadlines impact a much more substantial number of voters, he said.

“The voter registration deadline is a much bigger voter suppression” than voter ID laws, Pillsbury said.

The six states with the highest turnout are all same-day registration states, according to the report, America Goes to the Polls 2016.

Pillsbury said ensuring those who are eligible to vote are registered is the most proven way to boost turnout. He pointed to Oregon, Connecticut, Alaska, Vermont and West Virginia, states where eligible citizens who interact with the Department of Motor Vehicles are automatically registered to vote. Similar laws are taking effect in California and Colorado.

In Oregon, automatic voter registration added an extra 225,000 people to the rolls.

“You’re registering people who would not otherwise have registered,” Pillsbury said.