The national population is growing older and more diverse than ever before, according to new Census Bureau numbers released Thursday.

The nation’s median age is 37.9 years old, more than two years higher than the median age in 2000, according to new Census Bureau numbers released Thursday. The number of Americans over 65 years old has jumped from 35 million at the turn of the century to 49.2 million today.

Whites continue to be the biggest racial group in America, accounting for 256 million people in 2016. But their population grew by only 0.5 percent, fueled largely by immigration; non-Hispanic whites experienced a natural decrease of 163,000, meaning more whites died than were born last year.

“We’re becoming more diverse, from the bottom of the age structure up,” said William Frey, a demographer at the Brookings Institution. The population of younger whites has shrunk every year since at least 2000, Frey said. “To the extent that the white population is growing at all, it’s in that 55 and older population.”

That graying of America comes as the baby boom generation born between 1946 and 1964 edges toward retirement. At the same time, younger Americans are going through what some demographers call a baby bust, either choosing not to have children or delaying the decision to get pregnant.

The number of annual births has fallen steadily since 2007, when it hit a record high of 4.3 million, according to Cheryl Russell, a demographer and editor-in-chief of New Strategist Press. In 2015, 3,978,000 babies were born, the National Center for Health Statistics reported, 10,000 fewer than the year before.

“In general, states are growing more slowly in 2015–16 than they were in 2010–11,” Russell said in an email. “Behind that trend is the baby bust, which started in 2010. The decline in births is reducing natural increase, especially in states with older populations such as Pennsylvania.”

Pennsylvania is one of seven states that lost population between 2015 and 2016, the Census Bureau reported. Illinois lost more residents than any other state, 37,500, while Connecticut, Mississippi, New York, Vermont, West Virginia and Wyoming all bled population. 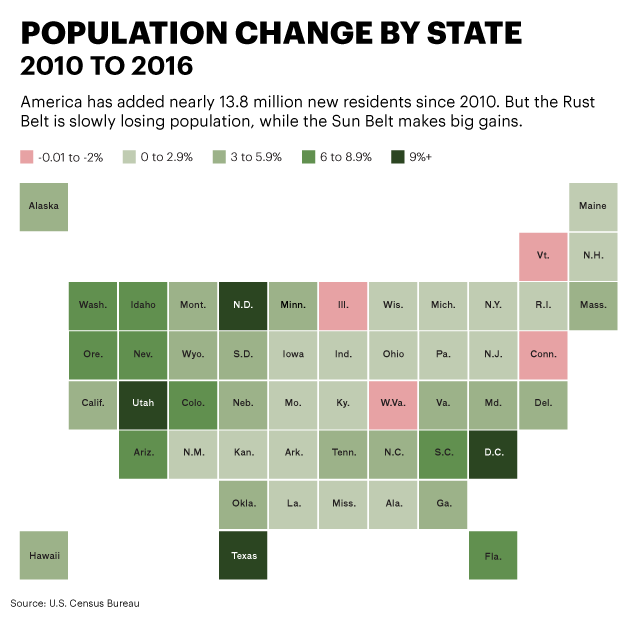 The population changes will benefit states like Florida in the next round of congressional reapportionment, which takes place following the 2020 Census. According to Kimball Brace, a demographer who projects new apportionment figures, Florida, North Carolina, Oregon and Texas are all likely to gain at least one seat in the U.S. House of Representatives in the next round of redistricting.

Those new seats will come from Illinois, Michigan, Minnesota and Pennsylvania, where populations have either declined or stagnated.

Longer-term projections hint that Florida could gain two seats, while Texas could gain as many as four. Montana may also stand to gain a seat, reclaiming a seat it lost in 1990. Those projections are likely to change in the coming years as population growth surges or slumps.

The population figures continue a long-term slide in congressional influence for Rust Belt states, which have bled seats since the early part of the 20th century. Illinois has lost at least one seat in every round of redistricting since 1980. Ohio’s delegation has fallen from a high of 24 in 1930 to just 16 today. Pennsylvania’s delegation has been cut in half, from 36 after the 1910 Census to 18 today.

Two-thirds of the nation’s counties saw their median age grow over the last year. Sumter County, Fla., is the oldest county in America, with a median age of 67.1 years. It is home to The Villages, a large and growing retirement community outside of Orlando.