How Florida explains our polarized politics

The strategists plotting Florida Gov. Rick Scott’s (R) reelection bid in 2014 faced a problem: The state’s explosive growth, especially in liberal cities like Miami, Orlando and Tampa, was being fueled by an influx of voters likely to back Scott’s Democratic opponent. To win a second term, Scott would have to find votes in unlikely places.

One of those unlikely places was Milton, a small town in the Florida Panhandle. Milton would certainly vote Republican that November — the question was whether enough voters would turn out to offset the Democratic advantage in the cities.

Scott won Milton’s county, Santa Rosa, by a 29,000-vote margin that year, taking 7,000 more votes than he had won in his first campaign, in 2010. Those 7,000 extra votes were almost enough to offset the much more populous Hillsborough County, which Scott’s Democratic opponent, now-Rep. Charlie Crist, won by 10,000 votes.

Both strategies succeeded. But Trump succeeded more, and he won what has become America’s consummate swing state by 112,000 votes.

This is the 12th story in The Hill’s Changing America series, in which we investigate the demographic and economic trends that are shaping the nation’s politics.

The national trends that have divided the country almost evenly between Democrats and Republicans are on display in microcosm in Florida, where convergent tides of migration sweep from the Panhandle to the Gulf and Atlantic coasts and down to South Beach. The demographic trends help explain why American politics has become so tribal and so focused on pitting one party’s core voters against the other’s.

Florida is booming. It is now the third most populous state in the nation, leaping ahead of New York over the last few years and generating more jobs than any state other than Texas and California. Of the 26 American counties that grew by more than 100,000 residents between 2010 and 2015, five are in Florida, and 30 of its 67 counties saw their population grow by 5 percent or more in that stretch.

The influx is fueled by two sets of migrants. The first group, amounting to nearly 5 million Florida residents, or about a quarter of the state’s population, comes from the Midwest or the Northeast, according to the Census Bureau. The second group, which includes more than 4.3 million Floridians, about 1 in 5 state residents, comes from another country or Puerto Rico.

But the waves of migrants, internal and external, rarely commingle. Midwesterners are most likely to move to Florida’s Gulf Coast, to Fort Myers or Tampa or Pensacola. Northeasterners are more likely to flock to the Atlantic Coast, to West Palm Beach or Daytona Beach or Jacksonville. Cubans have long played a major role in Miami politics, while Puerto Ricans disproportionately flock to Orlando. 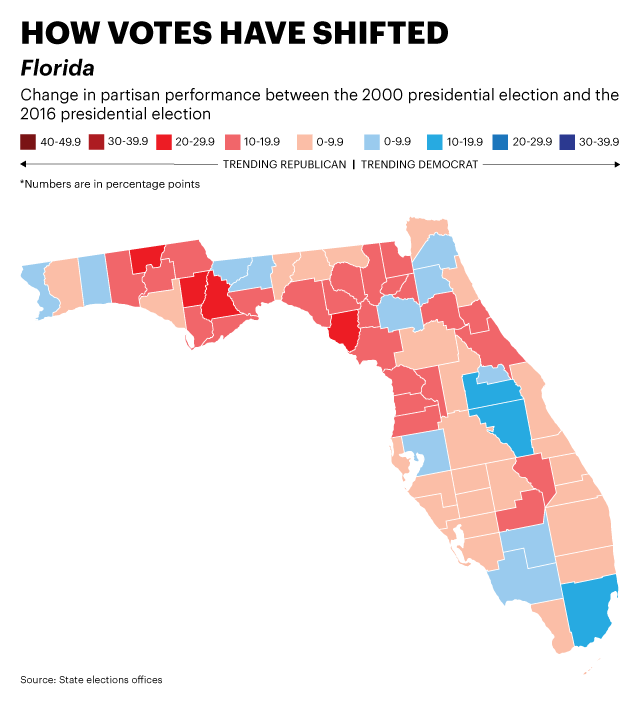 Former President Barack Obama’s campaigns in 2008 and 2012 turned out record numbers of voters in those cities — and Clinton’s 2016 campaign did even better. Clinton won 80,000 more votes in Miami-Dade County than Obama did in 2012, 45,000 more votes in Broward County and more than 50,000 extra votes in Orange County.

But Republicans, clued in by Scott’s campaign, found new votes in smaller counties.

During the 2016 presidential race, Trump held campaign rallies in Saint Augustine, Ocala, Panama City and Pensacola, taking valuable time to hit tiny media markets that other candidates might have skipped. He picked up at least 10,000 more votes than Mitt Romney did in 18 counties — including in relatively small counties like Charlotte, Hernando and Saint John’s.

Those 347,000 extra Republican votes in 18 counties were enough to entirely offset Clinton’s winning margin in Miami-Dade County. They amounted to more than twice as many extra votes as the Clinton campaign was able to find in the three counties — Miami-Dade, Orange and Palm Beach — where she most overperformed Obama’s 2012 campaign.

“The margin play is probably the thing that’s most overlooked in Florida,” said Tim Saler, a Republican strategist who worked for both Scott and Trump. “It’s a math problem.”

Democrats have struggled to connect with suburban and rural voters around the country, and that problem has been apparent in Florida. Since 2000, the party has seen its vote share decline in rural media markets like Panama City, in the Panhandle, and suburban markets like West Palm Beach. At the same time, their vote share grew by 5 percentage points in the Miami-Dade market, and it nearly doubled in fast-growing Gainesville, where the University of Florida is based.

One of the Democratic Party’s leading Florida experts, Tallahassee-based strategist Steve Schale, said Clinton’s success in places like Miami came at the expense of on-the-ground campaigning elsewhere. And while Democrats have set records in turning out new voters, that focus has come at the expense of persuasion elsewhere.

By Election Day, early voting and absentee balloting had given Clinton a 240,000-vote lead. But when the polls closed, Schale watched in horror as vote totals from Volusia County, east of Orlando, and Pasco County, north of Tampa, came in heavily for Trump. Democrats had expected to lose both counties — just not by as much as they actually lost.

On the phone with two top Clinton campaign officials, Schale went from optimistic to pessimistic. You’re going to lose the state, he told them. Clinton ended up losing among voters who cast their ballots on Election Day by 13 points.

In his office in Alexandria, Va., Saler was watching two counties that had been trending the other way. St. Lucie County, just north of Trump’s Mar-a-Lago estate, had not voted Republican since 1988. Pinellas County, home of St. Petersburg, had gone Democratic in five of the last six elections. Trump won both counties.

The counties Trump won presaged his victories, later that night, in Midwestern states like Ohio, Iowa, Michigan and Wisconsin: The Midwestern expats who had moved to sunnier climes had voted like those they left behind.

Florida’s future is one of growth, both from at home and abroad. The state is expected to add at least two seats to its congressional delegation in the next round of reapportionment, giving it the third-largest delegation in the House.

If population trends continue, each passing year will increase the importance of both the northern voters flocking south, and the southern immigrants flocking north. It presents Republicans with the opportunity to rely on conservative whites from the Midwest — and it could force Democrats to alter their strategy, to speak more to voters they have lost in Iowa and Michigan and Wisconsin.

“I don’t think you can base your strategy on historic turnout every year,” Schale said.

NYC mayor says Giuliani should be investigated: ‘To falsely report a crime is a crime’