Why Donald Trump flipped a Dem county in blue Connecticut

WINDHAM COUNTY, Conn. — In what had been one of the Northeast’s liberal strongholds, Donald Trump beat Hillary Clinton by 8 percentage points in the November presidential election.

Now, Republicans hope they have established a beachhead that could lead them back to power, or at least relevance, in a region that has proved politically elusive.

{mosads}The submarine base in New London is hard at work producing the next generation of Navy warships. The financial services sector that makes the New York suburbs some of the richest areas in America has recovered from the recession. But in the rolling hills of eastern Connecticut the textile mills have shut down, and what few manufacturing giants remain are shedding jobs.

Windham County has supported Democratic presidential candidates since 1992, and Connecticut has been solidly blue since Democrats knocked off three House Republican incumbents in 2006 and 2008. Yet, in a region some locals bitterly call “the other Connecticut,” there are signs that the sluggish recovery has left some voters open to persuasion.

“There’s still a lot of frustration about the fact that they really have not felt the benefits of whatever recovery you want to describe out there, and Trump became, you know, the change candidate,” said Rep. Joe Courtney (D), who represents eastern Connecticut in Congress.

“We’re like Appalachia up here,” said Tony Falzarano, the mayor of Putnam, population 9,416.

This is the 13th story in The Hill’s Changing America series, in which we investigate the demographic and economic trends shaping American politics today. And the Northeast shows those trends can force changes even in the most solidly partisan regions in the nation. Electoral College maps show an almost impenetrable sea of blue east of New York, but under the surface, Republicans have begun clawing back once-Democratic territory.

Around the country, the economic recovery has been good for corporate profits, especially in the financial sector, while at the same time leaving manufacturing communities behind.

As jobs dried up, so did the tax base in many communities once dependent on manufacturers and the property taxes they paid. Local governments have felt a simultaneous shock leveled by a persistent state budget gap that has robbed them of funding. Gov. Dannel Malloy’s (D) office said in May the state faced a $323 million budget gap going into next year, likely meaning more cuts ahead — cuts that will harm small rural communities that rely more on state money than their big-city neighbors.

“Twenty years ago, every town out here had a social service director, and maybe an employee,” said Richard Ives, a Democratic selectman in the small Connecticut town of Brooklyn. “That’s all gone away.”

Roy Piper, the Republican first selectman of Canterbury, population 5,089, said state funds to spur economic development through tourism have been reduced “almost to zero” and added that the cuts have also affected the quality of service.

After years of Democratic consolidation throughout the Northeast, voters are starting to punish the party in power for leaving them behind. President Obama won 56 percent of the vote twice in Windham County; in 2016, Trump took 51 percent.

The story of the nascent Republican comeback in New England begins after the party’s nadir in 2008, when Democrats held every one of the region’s U.S. House seats, every Senate seat except for Maine’s two centrist Republicans and every governorship except Rhode Island’s.

Today, Republicans control the governorships of Maine, Vermont, Massachusetts and New Hampshire. They hold one seat in Congress, Rep. Bruce Poliquin’s (R-Maine), along with control of both legislative chambers in New Hampshire. Connecticut’s state Senate is locked in a tie between 18 Democrats and 18 Republicans.

“In the greater New England culture, you see that big shift [toward the GOP],” said Colin Woodard, a journalist and author based in Maine. “And where do you see it? It’s all concentrated in several areas that are, like eastern Connecticut, rural and largely homogenously white.”

Since 2008, Republicans have gained between 5 and 9 percentage points in Connecticut’s eastern counties, said Ronald Schurin, a political scientist at the University of Connecticut. The same pattern has emerged in the rest of New England: Trump outperformed Mitt Romney in about 40 of the 67 counties in Vermont, Maine, Massachusetts, New Hampshire, Rhode Island and Connecticut. 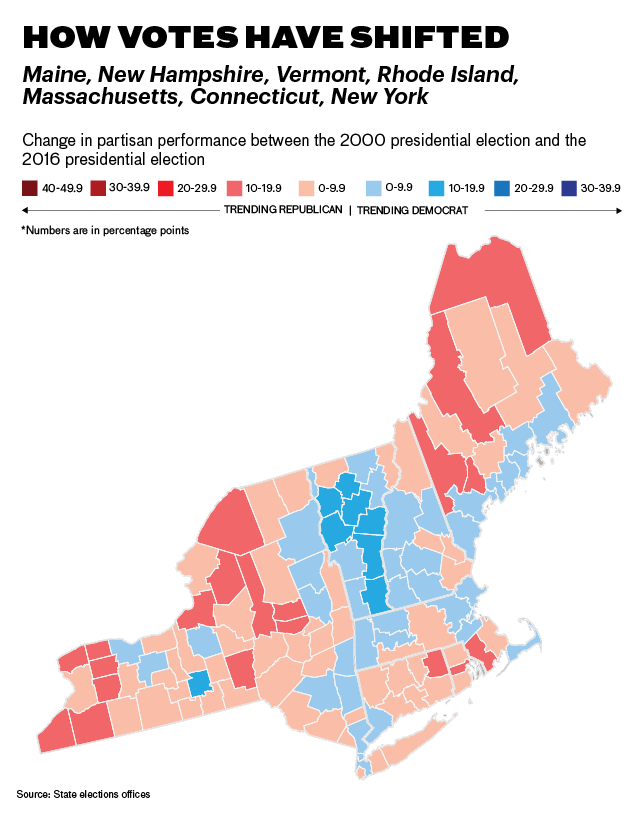 Clinton won all but one of New England’s electoral votes, though by a far narrower margin than Obama did in 2012. The only county in the region where Clinton outperformed Obama: Suffolk County, Mass., the heart of liberal Boston.

Across the region, Republican gains were most pronounced in smaller rural counties and those dominated by manufacturing jobs. Trump won eight counties in Maine that Obama carried four years earlier. Trump is the first Republican to carry a county in Rhode Island, Kent County, since Ronald Reagan’s reelection in 1984. In New Hampshire’s rural north, Coos County swung toward Republicans by a 26-point margin.

Every county that flipped from Obama to Trump relies heavily on manufacturing jobs to keep its economy humming. All but one, Hillsborough in New Hampshire, lost population over the last five years.

Healy said the same trends that propelled Trump to victory in Rust Belt states are present in eastern Connecticut, where communities “moved away from a manufacturing base more toward a service-oriented or a technology- or information-based economy.”

Courtney’s election was a part of the Democratic wave that washed over New England the last time the country underwent a political revolution, during the 2006 and 2008 midterm elections. In 2006, Courtney beat out Rep. Rob Simmons (R) by just 91 votes.

Courtney has won comfortably ever since. But now, Republicans see an opportunity for a comeback.

The National Republican Congressional Committee has its eye on Courtney and on several other New England Democrats, including Reps. Elizabeth Esty (Conn.), Bill Keating (Mass.) and Ann McLane Kuster (N.H.). Also on the committee’s political hit list is Rep. Carol Shea-Porter (N.H.), whose district gave Obama 50.2 percent of the vote in 2012 before flipping to Trump last year.

“I think that Donald Trump is such an unusual, different president — and I don’t say either of those things in a good way — that I have the feeling the landscape in 2018 might not be as friendly to the Republicans as they think it’s going to be,” said Roy Occhiogrosso, a longtime Democratic operative in Connecticut.

In the face of a potentially strong GOP campaign in 2018, Courtney indicated he’d be ready.

“We had a pretty aggressive field operation during the [last] campaign,” he said. “But I know this district really well, and, you know, it’s just a mistake to ever take it for granted.”

Mother of murdered Idaho student knocks police: ‘There is so much more that can be done that has not been done’