Fury fuels the modern political climate in US

Americans are angry about everything.

That’s what Rep. Steve Israel thought just months before the 2014 midterm elections. During that cycle, Israel poured over reams of data and watched hours of focus groups with voters across the country. The New York Democrat, who had been tasked with coordinating his party’s messaging strategy, saw voters deeply antipathetic about more than just the partisan political process.

{mosads}“We saw an historic breakdown of faith in institutions across the board, not just government,” said Israel, who has since left Congress.

People were angry about religious institutions riven by scandal and a financial system that led to the worst recession in modern history. They saw disruption taking place across the economy in deeply personal terms, like the local bookstore that had closed because of online competition or the taxi cab that had been replaced by ride-hailing services. And they saw a political system entirely unable — or unwilling — to offer a response that addressed their growing anxieties.

There have been plenty of times in the nation’s 240-year history in which an evolving economy has produced anxiety. But this time was different.

“The bookstore, the local small business, the taxi, those are proxies for people’s own economic security. And when they disappear, people think they’re next. There’s an existential fear for their economic survival,” Israel said. “Even when our politics and government failed us in the past, people have had safe havens to go to, whether it was sports or the church. Without a safe place to go to, that amplifies anxiety.”

President Barack Obama ran as a “hope and change” candidate in 2008, tapping into voter frustration with President George W. Bush and the Iraq War. Eight years later, Donald Trump ran an anti-Obama campaign. He said his candidacy “was representing a lot of anger out there.”

Last November, voters faced a choice between the two least-popular major-party presidential nominees ever to appear on a ballot.

Trump, the surprise winner, took over a capital as deeply divided as the country it ostensibly serves. One legislative chamber is controlled by a small cadre of the majority’s leadership, who are in turn at the mercy of a rump faction of arch ideologues. The other is torn by partisan discord that has escalated measurably for nearly 50 years, to the point of dysfunction.

After a decade of economic and cultural tumult, one in which our trust in civic institutions has fallen to all-time lows, the degradation of the nation’s political system has left American government at a crossroads. Congress is at a standstill. The two major political parties are both dealing with identity crises. 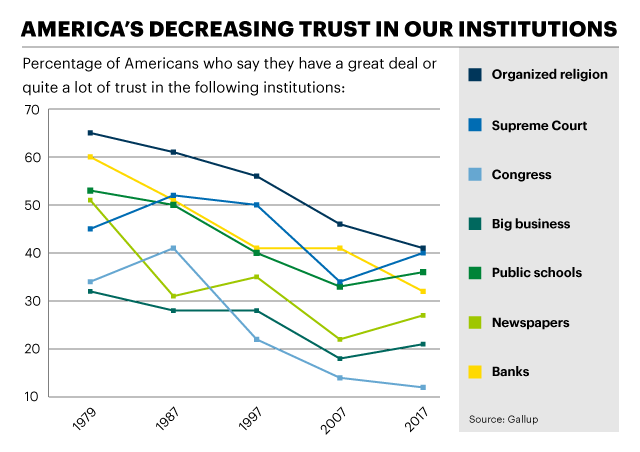 The chasms that have emerged in the wake of partisan gamesmanship and a vastly uneven economic evolution — even before a more uneven recovery — have become a feature of American life, not a bug.

“Our system is set up for cooperation, negotiation, those sorts of things,” said Rob Griffin, a demographer at the Center for American Progress and George Washington University. “Our system is uniquely unsuited to deal with polarization.”

This is the 21st and final story in The Hill’s Changing America series, in which we examine the economic and demographic trends shaping American politics today. In the course of reporting this series, The Hill spoke with more than 60 experts, including demographers, economists, political scientists, members of Congress, party strategists, local officials, union leaders and business owners.

Those experts universally agreed on the unique spirit of the American conscience, entrepreneurship and ambition.

But many are equally pessimistic about the future of the American experiment. The partisan fever created by two almost evenly divided factions vying for power, and the logjam in government, show few signs of breaking without some sort of nationally unifying catastrophe.

The polarization of our politics and the wider loss of trust in cultural institutions comes amid a collective struggle to sort out the next steps in the American experiment, the stalemate among our leaders to chart a future course.

To begin, the issues at the heart of both the Trump campaign and Hillary Clinton’s campaign touched on the very questions of what it means to be an American.

The economic evolution that has sent manufacturing and extracting industries plunging while service and technology jobs surge has challenged the preconceptions of a generation of Americans accustomed to seeing an assembly line job as a path to middle-class success.

The influx of immigrants seeking a better life within our borders is speeding a demographic change already well underway due to natural growth in minority communities.

And the small towns that once defined Middle America are dying as big metropolitan areas outpace them in job creation and cultural dominance.

“The things that we’re fighting about are fundamentally different visions of what America is,” said Lee Drutman, a political scientist at New America. “There’s never been a democracy as diverse or unequal as the United States.”

Blame lies, too, with the leaders sent to Washington. Politicians, like anyone, are driven by incentives, and in a moment of hyperpartisanship the overwhelming incentive is to demonize the other side — as Trump has with immigrants who came to the U.S. illegally, or to a lesser extent as Clinton did with her “basket of deplorables” remark.

More broadly, that demonization has set communities against each other: Rural residents resent the elitism of urban cores. Race relations between whites, blacks and Hispanic-Americans are degrading: About 60 percent of minorities say race relations are generally bad, according to a Pew Research Center poll released last year, and another Pew poll showed 43 percent of whites and an incredible 74 percent of blacks fear race relations will get worse. About 6 in 10 Republicans and Democrats say they fear the other party’s agenda, a four-fold increase since the mid-1990s.

“Concerns about the other tend to be more prevalent than before, but what that other is isn’t clear,” said Emily Ekins, director of polling at the Cato Institute.

Some blame the media for playing up conflict and increasing divisions in the country. Arguably, no industry has undergone a longer and more sustained disruption than the communications industry.

Decades ago, Americans consumed the vast majority of their news from one of a small handful of sources, concentrated in the nation’s largest cities. Walter Cronkite was the most trusted man in America, and even robust local newspapers consumed Associated Press content or raced to match The New York Times.

Today, the rise of partisan media outlets has supplemented conservative talk radio and in turn has been supplemented by the internet’s ability to spread dubious news.

“We don’t even start from the same set of facts anymore,” said Billy Piper, a Republican lobbyist and former chief of staff to Senate Majority Leader Mitch McConnell (R-Ky.).

In a political system with a bias toward slowing progress, most observers see three potential paths ahead, two of which are unlikely and a third that is unpalatable: a radical change to existing rules, the rise of a third party or a continuation of the intractable morass of the status quo. 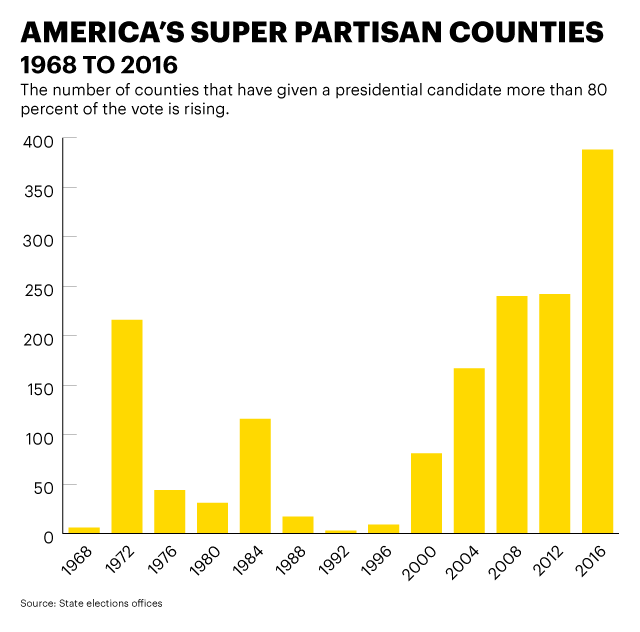 Democrats, in particular, hope for radical changes in the electoral process, thereby changing the incentives to which leaders respond.

The significant decline in the number of truly competitive House and state legislative districts, the result of aggressive gerrymandering enacted by both parties, has made members of Congress more accountable to the small number of party activists who decide primary elections — rather than the broader middle that might demand more bipartisan cooperation. And influxes of money into the political system, through super PACs and outside groups, have left many voters convinced their voices matter less than special interest groups.

“Right now, there is no incentive for any of my former colleagues to compromise, to meet in the middle,” Israel said. “And that’s because the bases of both parties are so polarized, because congressional districts are drawn further to the left or further to the right.”

Those changes would require constitutional or statutory measures that have demonstrated little traction in Congress. Efforts to overturn the Supreme Court’s Citizens United decision are virtually dead on arrival, and measures to reform the redistricting process have gathered only a handful of supporters.

A second option, almost equally unlikely, is the rise of a new party, like Emmanuel Macron’s En Marche, which upended the traditional center-left, center-right axis of French politics.

But the existing political system makes that unlikely as well. The French political calendar allowed Macron’s party to capture 313 of the 577 seats in the National Assembly after Macron won the presidency. The American calendar elects a president at the same time it chooses a Congress. So while Americans might choose a wealthy or well-funded centrist presidential candidate, that new president would almost certainly be left without allies in Congress.

The third option, and the most likely, is maintaining the status quo of partisanship and mistrust, both within Congress and across the country.

“The anger that comes with being presented with those two extreme choices has led to the gridlock and paralysis and political failure,” Quinn said. “Donald Trump’s narrative is simply: America is in a zero-sum game. Pick your tribe and arm yourself. And if his narrative wins, that’s the future that we all have to look forward to.”