The number of Americans living with a spouse or partner has fallen notably in the last decade, driven in part by decisions to delay marriage in the wake of a recession that hit new entrants into the workforce especially hard.

The higher number of spouseless households comes as the marriage rate declines precipitously. Just half of American adults are married, down from 72 percent in 1960.

The average American woman gets married just after her 27th birthday, while the average man waits until he is 29.5 years old to marry — significantly higher than the median ages half a century ago.

“The median age of first marriage has gone up significantly over the past several decades,” said Kim Parker, who directs research on social trends at the Pew Research Center. “But it’s not all about delayed marriage. The share of Americans who have never married has been rising steadily in recent decades. So, part of it is a move away from marriage.”

Pew researchers said the rise in those households without a partner or spouse is not a sign that more marriages are breaking up; the divorce rate has been stable, or even declining, since the 1980s.

Instead, analysts said, the decline in both marriage and partnerships is likely a result of the declining ability of men to earn a salary large enough to sustain a family.

“All signs point to the growing fragility of the male wage earner,” said Cheryl Russell, a demographer and editorial director at the New Strategist Press. “The demographic segments most likely to be living without a partner are the ones in which men are struggling the most — young adults, the less educated, Hispanics and blacks.” 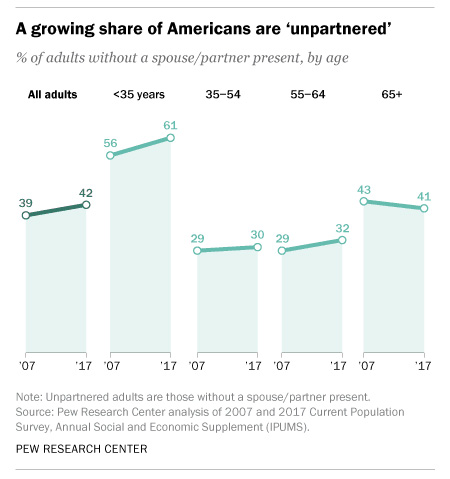 “The point at which the average young man becomes ‘marriageable’ appears to be earnings of $40,000 a year or more,” Russell said.

The Pew data underscores the economic marriage gap: Adults who do not live with partners are more than twice as likely to live in poverty than those who have partners.

“Our surveys show us that one of the things that’s holding unmarried adults back from getting married is that they feel they’re not financially stable enough,” Parker said.

A little more than a quarter of those living without a partner or spouse live with a parent or a grandparent. More than a third live alone, the Census data show.

Hurricane Ian’s destruction — by the numbers

Putin puts US officials on edge with nuclear saber-rattling

Biden has tried to rebuild the refugee system. This year will test that