Americans think economy is improving — just not for them

More Americans say the economy is improving, but even those who see more prosperous times around them feel that their families are being left behind.

The contrast is likely to present a challenge to politicians at all levels running for office next year. Those seeking reelection must find a way to claim credit for the improving economy while simultaneously empathizing with those struggling to keep up.

A new survey from the Pew Research Center found 50 percent of Americans said there were plenty of jobs available in their local communities, while 42 percent said jobs are difficult to find.

It is the first time since Pew pollsters began asking about job openings, back in 2001, that more people have said there are plenty of jobs available than those who have said work is hard to come by.

But many still think they are falling behind. Forty-nine percent of Americans told Pew their family’s income level is not keeping pace with the cost of living, while 40 percent said they are staying about even.

Just 9 percent of Americans say they feel like they are getting ahead. 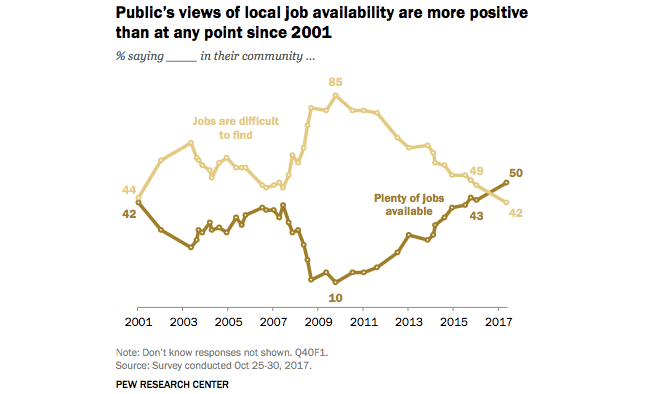 There were few differences along racial lines, though African-Americans were slightly more likely to say they are falling behind (54 percent) than were white voters (47 percent).

Other pollsters say they have seen the same disconnect between macro- and microeconomic views.

“Voters are kind of willing to structurally say the economy is getting better in certain ways as their own personal situations are not,” said Nick Gourevitch, a partner at the Democratic polling firm Global Strategy Group. “The micro is still very negative out there.”

Overall views of the economy are improving, though so far only Republican voters are willing to credit President Trump’s policies. 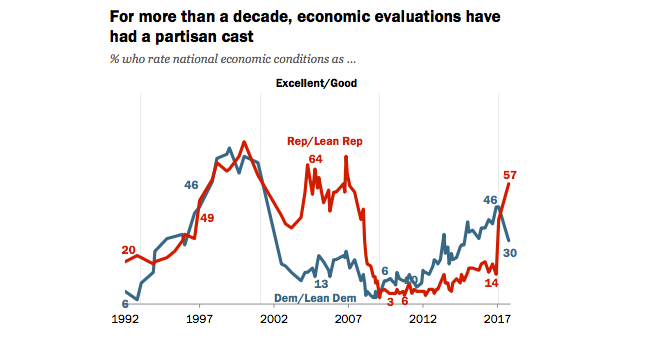 Between 2009 and 2012, barely 10 percent of Americans saw an economy in excellent or good shape.

Improving views of the national economy, and stagnant views of their own personal economics, may be one reason so many recent elections — including the 2016 presidential campaign and the 2017 race for governor in Virginia, which Democrats won Tuesday night — have seemingly become referendums on cultural issues as much as debates over the future of the economy.

Much of President Trump’s appeal to voters in 2016 hinged on bringing back once-dominant industries, like manufacturing and coal mining, that have waned in recent decades. His warnings about immigrants flooding over the border and a growing crime wave were more cultural than economic, though he did warn of immigrants taking jobs from Americans.

“There is this tension right now between fiscal messaging and social and cultural messaging,” Gourevitch said. “In 2016, it felt like the cultural piece trumped, for lack of a better word, the fiscal worries.”

As American politics have become increasingly polarized, so too have the views of the economy. When President Obama held office, Democrats were far more likely to have a positive economic outlook. After Trump took over, the Republican mood brightened substantially.

The Pew Research Center survey polled 1,504 adults between Oct. 25-30 for an overall margin of error of plus or minus 2.9 percentage points.

Tyre Nichols arrest footage: What we know so far

Eric Garner’s daughter criticizes release of Tyre Nichols footage: Treated like a ‘premiere of a movie’