The number of abortions performed in the United States has fallen to the lowest levels since the Supreme Court’s landmark Roe v. Wade decision in 1973, according to new federal government data that also found rates and ratios of abortions hitting new lows.

The report from the Centers for Disease Control and Prevention (CDC) found 652,000 abortions conducted in the United States in 2014. The data show a decline in abortion rates in every state that reported results to the CDC — including both states that have implemented new restrictions on abortion and those that are more supportive of abortion rights — and among all ethnic groups. 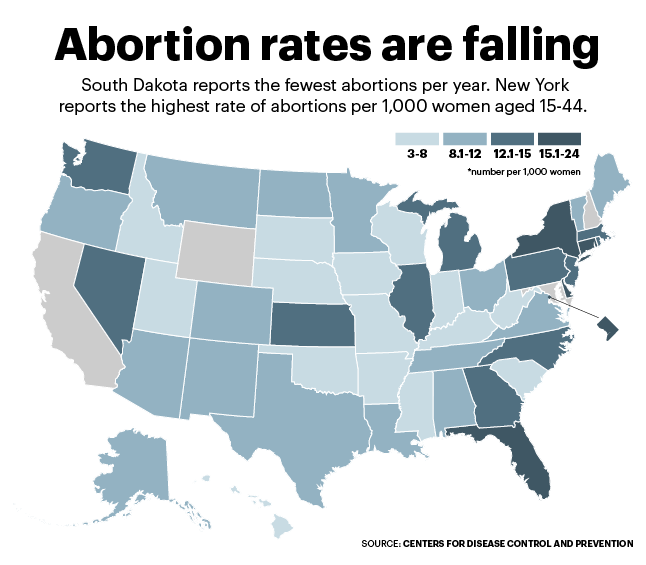 Experts on both sides of the abortion debate pointed to a simultaneous decline in the birthrate, a long-term trend that has accelerated in recent years. American women are having far fewer children today than in the past, and those who do have families are starting those families later in life.

“Abortion and births seem to be falling at the same time, which means fewer people are getting pregnant,” said Jenna Jerman, a senior research associate at the Guttmacher Institute, which supports abortion rights. “There is better use of contraception over time.”

Adolescent pregnancies are also decreasing precipitously, down 55 percent between 1990 and 2011. Early data suggest those numbers will continue to fall: Birthrates for women between the ages of 15 and 19 declined an additional 35 percent between 2011 and 2016, hitting the lowest levels since CDC began collecting data.

Both Jerman and Studnicki said the federal data is limited in what it can show. States are not required to submit their abortion data to the CDC, and three states — California, New Hampshire and Maryland — do not submit their reports at all.

The Guttmacher Institute conducts its own survey of abortion providers, which it says yields a more accurate number, but even then the institute found fewer abortions than at any time since Roe v. Wade. The group’s latest report, conducted in 2014, found 926,000 abortions performed that year. The number of abortions peaked in 1990, at just more than 1.6 million.

The decline comes as the CDC reports a further drop in birthrates across the country, as well. Data the centers released earlier this year show birthrates falling to 62 per 1,000 women aged 15 to 44, led by a startling drop in rates among women in their 20s. Women are choosing to have children later in life — the birthrates among women in their 30s and 40s is rising — but not by a sufficient margin to account for the decline among the younger cohort.

“We’ve been below replacement rate in the United States for a long time. That’s not a new phenomenon for us. If not for immigration, our population would be getting smaller, not larger,” Studnicki said.

Women in their 20s accounted for nearly 60 percent of all abortions performed in the U.S. in 2014, the CDC report found.

States where the fewest abortions were performed tended to be states where abortion laws are the most restrictive, and where the population is generally older. South Dakota had the lowest abortion rate in the country, at 3.5 per 1,000 women between the ages of 15 and 44. Utah, Missouri, Mississippi, Kentucky and Idaho also had the lowest rates of abortion occurrence.

But those low rates do not mean that women in those states are not seeking abortions. Missouri has more restrictive abortion laws than Kansas, and the evidence suggests many women in Missouri cross over into Kansas to receive abortions. Nearly half, 49.6 percent, of abortions performed in Kansas are obtained by women who do not live in the state. 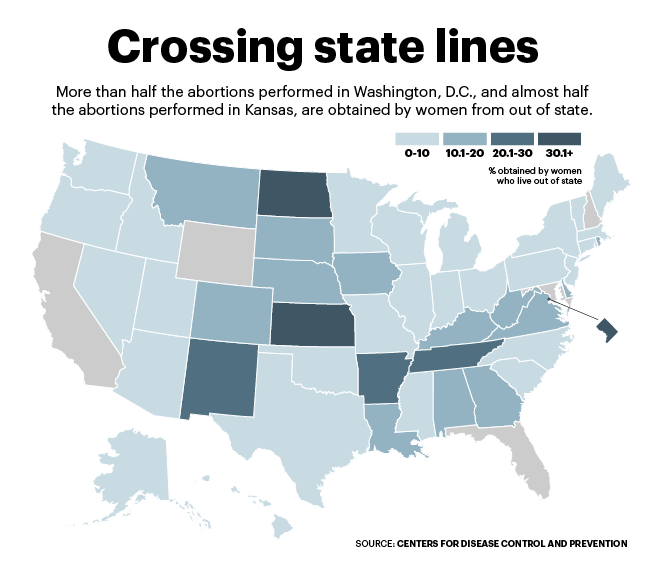 “There are a substantial population of women of reproductive age who live right across the border,” Jerman said.

The state with the highest rate of abortions is New York, where there are 23.9 performed for every 1,000 women between the ages of 15 and 44. Florida, Delaware, Connecticut and the District of Columbia registered at more than 15 abortions per 1,000 women of child-bearing age. More than half, 55.6 percent, of all abortions performed in Washington, D.C., are obtained by women who do not live in the District.