Americans and immigrants from abroad are flocking to the nation’s metropolitan areas in droves, pursuing new jobs and economic opportunity. But at the same time, rural America is losing population at an alarming rate, raising fears that economies slow to recover from the recession have dark futures ahead.

Annual population estimates from the U.S. Census Bureau released Thursday show 60 percent of American counties experienced natural population growth over the last year. In just over half the nation’s counties, more people migrated in than moved out.

But since the recession, the vast majority of American population growth has been concentrated in a very small number of counties — ones that are home to booming metropolises.

{mosads}“By and large, the dynamics squarely favor large, dense, often coastal places,” said Mark Muro, a senior fellow and policy director at the Brookings Institution’s Metropolitan Policy Program. “The digital nature of the economy now rewards dense, highly skilled pools of technical talent, even more than in the past.”

Since 2010, the 100 largest counties in America have added a total of 9.3 million new residents. All but six of those counties have experienced growth.

The six laggards are all cold-weather Rust Belt counties around cities like Detroit, Cleveland and St. Louis, where old-line manufacturing jobs primarily in the auto sector have vanished.

The fastest-growing counties in America are overwhelmingly concentrated around booming tech hubs. Some, like Phoenix and Las Vegas, are experiencing population booms after suffering through the recession. Others, like Seattle and the Washington suburbs, thrived even during the recession. 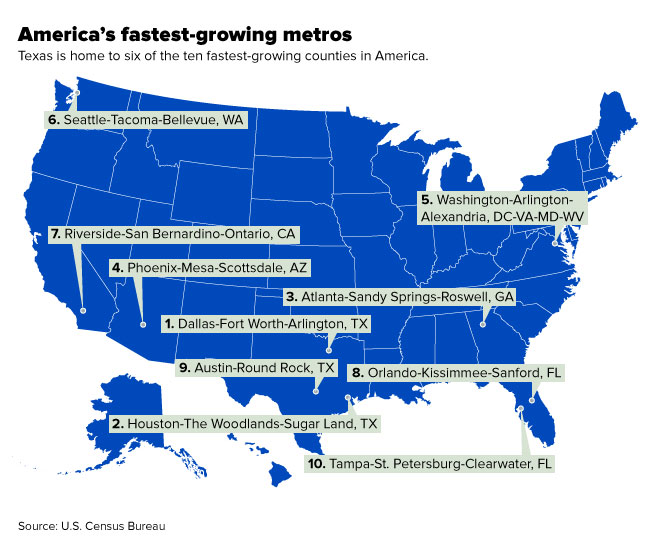 Among the counties growing fastest by percentage are three Salt Lake City-area counties, one Orlando suburb and Falls Church, Va.

Many of the counties that have lost population over the last several years are experiencing not only a migration exodus, but also natural declines — that is, more deaths than births. That, said demographer Cheryl Russell, editorial director of New Strategist Press, is a sign that rural economies are likely to continue to suffer.

“Clearly the ongoing baby bust is having an impact on local economies, making net domestic migration a more important factor for local growth,” Russell said in an email.

But both Muro and Russell said there is some reason for rural economies to hope.

Nonmetropolitan areas accounted for just 12.4 percent of U.S. jobs in January 2017, but 16.6 percent of all the new jobs created in the last year, according to Muro’s research. Those increases, he said, come from higher oil and gas prices and subsequent increased production, as well as manufacturing jobs in nonautomotive sectors that come in smaller towns.

“High oil and gas prices are creating a big growth on output, but also on some employment growth,” Muro said. “There is a little bit of an uptick in manufacturing.”

Russell said the growing number of counties that had added population shows that the economic recovery that came early in big cities is trickling down to smaller areas, too.

North Dakotans to vote on marijuana legalization in November