Share Tweet
More
Share
Twitter
Facebook
LinkedIn
Whatsapp
Email
SUNFISH LAKE, Minn. — Bolstered by an unpopular Republican president and favorable winds in suburban districts, Democrats see a golden opportunity to win back hundreds of state legislative seats across the country, rebuilding a bench decimated by midterm election results in 2010 and 2014.
The favorable conditions represent the Democratic Party’s first chances to claim some control over the decennial redistricting process, which begins after the 2020 census.
{mosads} Democrats found themselves at a massive disadvantage after losing hundreds of seats in 2010, just before the last redistricting process cemented Republican control of Congress.
Today, the GOP holds 67 of 99 legislative chambers across the country. The GOP holds exactly 1,000 more seats than Democrats, 4,134 to 3,134. 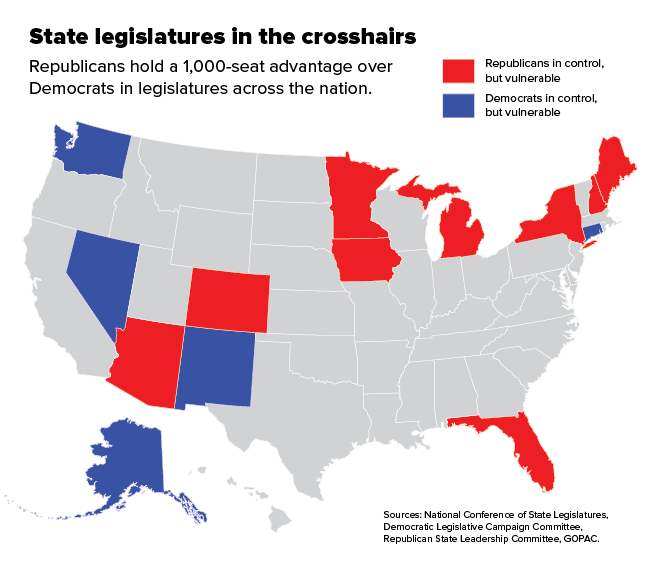 This year, voters will elect state legislators to fill 6,073 seats in 87 chambers.
Republicans expect to lose some of their historic edge: The party that controls the White House loses an average of about 350 seats in state legislatures in midterm elections. Democrats lost more than 960 seats during the two midterms when former President Obama was in office.
Those seemingly mammoth swings come because state legislative seats are notoriously tied to national political trends.
Legislative candidates with little money to spend can be swept away at the whims of an electorate aiming to punish the party that holds the White House.
Democrats have more than a dozen Republican-held state legislative chambers on their radar this year, including in Minnesota, where Republicans hold slim majorities in both the state House and the state Senate.
“Democrats have put all of their eggs in the basket that Minnesotans will hate Donald Trump,” said Kurt Daudt, the Republican Speaker of the Minnesota state House. “Out in greater Minnesota, Trump is more popular than he was two years ago. In the suburbs, Trump is less popular.”
There is an even number of Democrats and Republicans currently in the state Senate, and only a single vacancy on the ballot, in a Republican-held district.
In the state House, the GOP holds an 11-seat edge, including a seat in this white collar suburb of St. Paul where a Republican won by just 121 votes in 2016.
“The fire’s in the belly of Democrats,” said Matt Klein, a Democratic state senator who represents this area.
Democrats are within five seats of reclaiming control of state Senates in Arizona, Colorado, Florida, Maine, New Hampshire, New York and Wisconsin.
The party is only a handful of seats away from winning control of lower chambers in Michigan and New Hampshire, too.
“There is more Democratic enthusiasm than I have seen in the last few cycles. That’s a reality I can’t ignore,” said Robin Vos, the Republican speaker of the Wisconsin state Assembly. “Democrats for the first time became frustrated with what’s happening in Washington.”
Republicans are not without their own opportunities. Democrats hold only slim majorities in both chambers of the Connecticut legislature, where the state budget and higher taxes weigh heavily on voters’ minds.
Republicans will also try to make inroads in the New Mexico House, the Nevada Senate and both Democratic-controlled chambers in Washington and Oregon.
In Alaska, a bipartisan coalition controls the state House even though Republicans hold more seats.
Though state legislators are usually consumed by vexing local issues like infrastructure, education and jobs, both parties say their members are frequently caught up in a national conversation over which they have little control.
“It’s really hard to break through. There’s so much news at the federal level that anything you try to put out there is eclipsed,” said Scott Fitzgerald, the Republican president of the Wisconsin Senate.
In New Hampshire, where 400 people sit in the state House of Representatives, swings of 100 or more seats in a given election cycle are not uncommon — especially when a president is unpopular, as President Trump is in many targeted states.
Hints of a Democratic wave have come in special elections in a handful of states, from Wisconsin to New Hampshire, Florida to Missouri this year. In 2018, Democrats have won control of ten seats formerly held by Republicans in special elections.
But Republicans have flipped two important Democratic-held seats too, in exurban Pittsburgh and along the U.S.-Mexico border in Texas.
Most state legislatures have a significant influence over the decennial redistricting process. State senators elected this year, most of whom will serve four-year terms, will be in office when the next re-mapping takes place between 2020 and 2022.
The last redistricting process helped Republicans cement their majorities not only in Congress, but also in many state legislative chambers themselves. Democrats say this year, the wind may be sufficiently at their backs to overcome even the most unfavorable district boundaries.
“They gerrymandered the hell out of these districts, but we think we have a shot at winning back these seats,” said Michigan Senate Democratic Leader Jim Ananich. Twenty-six of Michigan’s 38 state senators face term limits this year; Democrats need to win back nine seats to regain control.
Tags 2022 midterm elections Barack Obama Democratic Party Donald Trump Obama Republican Party
Share Tweet
More
Share
Twitter
Facebook
LinkedIn
Whatsapp
Email

Greene yells ‘liar’ after Biden remark on Medicare, Social Security during State of the Union