The 10 counties that will decide the 2020 election

Three years after a presidential election that came down to 77,000 votes in three Midwestern battlegrounds, Democrats and Republicans are eyeing a much larger battlefield ahead of the 2020 contests, one that stretches from the picturesque coastline of rural Maine to the high desert of Arizona.

Both President Trump’s campaign and the Democrats vying to replace him are scrutinizing a political map in flux, one in which attitudes and alignments are shifting and new regions are coming into play.As many as a dozen states could be up for grabs next year as economic and international uncertainty pairs with a cauldron of domestic discontent in government.

Interviews with two dozen strategists, political scientists and observers show the 10 counties across the country that will determine the outcome of the 2020 presidential election.

The critical tipping points are as diverse as the American electorate. Some are suburban neighborhoods where both Trump and former President Obama won. Others are longtime Republican strongholds that show signs of slipping. Still others have voted Democratic since the New Deal, only to be broken by Trump’s historic campaign.

Here are the 10 counties that will determine whether Trump gets a second term:

Settled by Yankee migrants from New England, this Pennsylvania manufacturing hub has long resembled Massachusetts or New York more than parts of Pennsylvania founded by Quakers. But in 2016, after years of population exodus, Erie County flipped, and Trump became the first Republican to win here since Ronald Reagan in 1984.

Erie is still theoretically a Democratic domain. About half of voters are registered Democrats, and just 36 percent are Republican. Democrats hold five of seven county council seats. But those Democrats are not coastal progressives, Pennsylvania politicos say.

“What you have is a working-class county that’s socially conservative,” said Terry Madonna, director of the Center for Politics and Public Affairs at Franklin and Marshall College. “Many Democrats there believe that their party has deserted them and become the party of big cities.”

In 2016, Trump beat Democratic nominee Hillary Clinton there by 1.6 percentage points — about twice the margin by which he won Pennsylvania’s electoral votes. In 2008 and 2012, Obama won Erie County by double-digit margins. Democratic success there will be a sign that the party has bridged the divide with its own voters who feel left behind.

The historical home of the Ringling Brothers circus has become a political circus itself, as once-genteel Wisconsin politics has descended into acrimonious partisanship.

The tension is evident in Sauk County, west of Madison, where small towns interrupt miles of farmland and where an influx of commuters to the growing capital have set up a clash between the red rurals and the blue sprawl.

“Back in the day, Wisconsin farm country used to more consistently go for Democrats,” said Brian Reisinger, a Republican strategist who was raised in Sauk County. “The rural shift toward Republicans is partially offset by the number of Madison-types who are crossing over the county line to live in small towns where taxes are lower and the world makes more sense.” 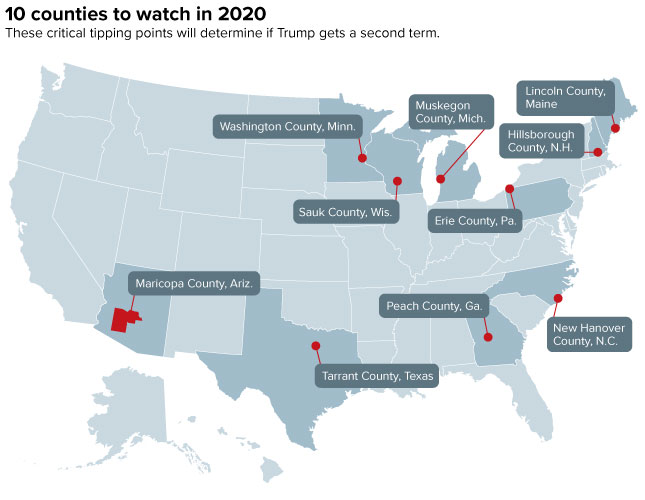 The first western outposts established on Lake Michigan were set up by French traders as the War of 1812 raged. Muskegon takes its name from the Ottawa Indian word for marshy river or swamp.

Today, its economy is dominated by a struggling manufacturing industry and a growing health care sector. Though the county has voted Democratic in every presidential election since 1992, Clinton won it by just 1,200 votes — the closest margin of any county in Michigan, which gave its electoral votes to Trump.

“Muskegon will be indicative of the statewide vote in the next election,” said Holly Hughes, who represented the area in the Michigan legislature and served on the Republican National Committee.

Hughes said she had fielded a call from George W. Bush’s campaign in 2000, asking her for results from a county they believed would mirror the statewide results. If Trump continues making inroads there, he would keep Michigan’s electoral votes in his column.

As partisan politics increasingly break down along urban and rural lines, Arizona Republicans are becoming more nervous. Arizona is the most urbanized state in the Republican column, and its most urban county, Maricopa, shows signs of inching left.

In 2016, Trump beat Clinton in Maricopa County by just 3 percentage points, a slightly lower margin than his statewide edge. Only one Republican in recent history has won a statewide election without winning Maricopa County.

The areas most at risk for Republicans are middle-class precincts where college-educated residents tend to make between $50,000 and $100,000 a year, said Mike Noble, a Republican pollster in Phoenix.

“It’s in these suburban areas where we are seeing the biggest shift in party voter preference,” Noble said. “Those [who] are college educated or above is where the GOP is currently hurting.”

Phoenix’s rapid growth is being fueled by young workers in search of a good job — who tend to bring their blue-state voting habits with them. In 2018, Kyrsten Sinema beat Republican Martha McSally in Maricopa County and became the first Democrat to win a Senate seat in Arizona since 1988.

Rapid population growth in Texas’s largest cities is masking another troubling trend for the state’s dominant Republican Party: Their margins of victory are declining even in historically red regions.

“In Tarrant, you still have some of those Country Club Republicans,” said Ed Espinoza, a Democratic strategist who runs the progressive group Progress Texas. “There is a greater discomfort among Republicans with the rhetoric coming from the president and the party in Texas than there might be in Dallas or other places.”

Tarrant County hasn’t voted for a Democrat since Lyndon Johnson won his home state in 1964. But its booming population may change that: Since Republicans began losing market share there, about 40 percent of the county’s residents are new.

Some of the first British settlers along the North Carolina Tidewater settled in New Hanover Precinct, named for the German house that ruled Britain at the time. Dominated by Wilmington, New Hanover was part of the Democratic Solid South until Richard Nixon’s election in 1968. Since then, it has only voted for one Democratic presidential candidate — fellow Southerner Jimmy Carter.

But the GOP’s historic advantage there is shrinking. Obama came within 1,400 votes of winning New Hanover County in 2008, and Trump became the first Republican to win less than half the vote since George H.W. Bush split the conservative vote with Ross Perot in 1992.

“Like most of the state’s larger cities, Wilmington has seen an influx of urban white liberals, making the city more Democratic,” wrote John Wynne, a North Carolina elections analyst. “At the same time, affluent retirees, who tend to vote Republican, are settling along the beaches.”

Trump won the county by 2.9 percentage points. He won North Carolina by 3.6 points.

About a hundred miles south of Atlanta lies one of the country’s clearest examples of a combined racial and geographic divide. In the middle of rural Georgia, Peach County’s residents are about half white and 45 percent African American. About half live in its cities, and half live in rural areas.

Those divides might as well be partisan stand-ins. Peach County is one of a few hundred pivot counties in America, counties that voted for Obama twice and Trump in 2016. In 1968, the segregationist George Wallace took 42 percent of the vote there.

“It’s struggling, like most rural communities are in Georgia,” said DuBose Porter, a former chairman of the state Democratic Party. “We’re losing health care providers. We’re losing hospitals. We’re losing manufacturing, and we’re not replacing that with anything.”

In a county of just 27,000 people, every vote counts. Last time around, Peach County stood as a bellwether for the entire state. Trump took 50.3 percent of the vote, almost perfectly matched his performance statewide, 50.4 percent. In 2018, Republican Brian Kemp scored 52 percent of the vote in his bid for governor, beating out Democrat Stacey Abrams by just under 500 votes.

Minnesota represents one of a small number of states that voted for Clinton in 2016 that presents Trump with a chance to expand his map in 2020. If he wants to win here, he must carry Washington County, along the border with Wisconsin.

The first white settlers arrived along the banks of the St. Croix River to log its rich forests. In 1838, early residents in Stillwater, the county seat, formally petitioned Congress to create a new state called Minnesota. Today, its residents are more likely to commute to the booming Twin Cities. A fifth of its residents have moved in since 2000, blending its rural roots with exurban sprawl.

“President Trump has already transformed rural politics in his favor, so increasing support from suburban voters will be key to the outcome of the election,” said former Gov. Tim Pawlenty (R), who carried Washington County in both his runs for governor.

Another opportunity for the Trump campaign to pick up electoral votes comes in New Hampshire, a state Clinton won by fewer than 3,000 votes. Trump could close that gap by winning a bigger margin in Hillsborough County, the largest in the state, where he led Clinton by fewer than 500 votes.

Named for the British secretary who oversaw the colonies, Hillsborough was a historically Republican county, dating back to the 19th century. But party affiliations have changed as more Bostonians move north and commute back to the city; Obama won Hillsborough twice.

And while Trump won narrowly in 2016, there are signs of serious discontent. The 2018 midterm elections wiped out many Hillsborough members of the state legislature; today, Democrats hold two-thirds of the state House districts in the county.

“Hillsborough tends to represent the state in terms of electoral outcomes,” said Mike Dennehy, a GOP strategist who ran the New Hampshire operations for former Sen. John McCain’s (R-Ariz.) two presidential campaigns. It represents about a quarter of the state’s registered voters, a pivotal slice that makes a difference in such an evenly divided state.

Lincoln County reflects many of today’s most fraught political dividing lines all in one, and all well-balanced. For two centuries it has been a working-class hub, home of shipbuilding industries and the lobster fisheries that give Maine its distinctive contribution to American cuisine.

At the same time, its picturesque islands and landscapes have made it a longtime tourism destination, from the Gilded Age to today, said Colin Woodard, a Maine-based journalist and author of “American Nations: A History of the Eleven Rival Regional Cultures of North America.”

“A mix of working class fishermen, deep-pocketed retirees (both liberal and conservative) and tourism-dependent workers and business owners, partisan political contests are highly contested at almost every level, from town councils and the state legislature to Congress and the presidency,” Woodard said in an email.

Those rival factions fought to a near draw in 2016. Clinton won Lincoln County, 47.6 percent to 45.2 percent — nearly identical to her 2-point win in the popular vote. If Trump keeps his blue-collar base, or if ancestral Republicans break against him and cost him the White House, Lincoln County will be the microcosm through which to view the 2020 outcome.

Thousands protest Tyre Nichols’ death in cities across the US