Legislators in more than half the states are debating bills to limit access to sports or medical care for transgender people, opening a new front in the wars over LGBT rights that threaten to spill into the courts.

Across the nation, at least 35 bills have been introduced to ban transgender students from playing sports in leagues that conform to their gender identity. Another 25 bills would prohibit access to gender-affirming medical care, in some cases with criminal punishments for parents who approve the care or doctors who perform it. 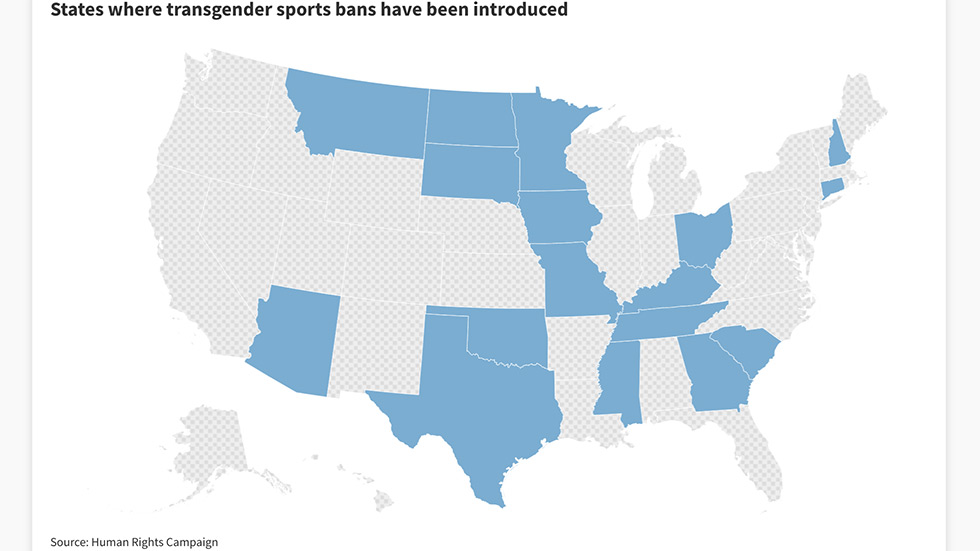 Only one state, Idaho, has passed a bill banning students from participating in sports under their gender identity, in 2020. None have passed measures that would block minors’ access to medical care, which usually involves medication to delay puberty.

But for the first time this year, anti-transgender legislation is making significant progress in multiple states at the same time. The Tennessee state Senate passed its version of a sports ban Monday, and legislators in South Carolina heard testimony on their state’s version of the bill last month.

Supporters of such legislation argue the bills are necessary to protect women and girls, and to maintain the progress women’s sports have achieved since the passage of Title IX half a century ago.

“Title IX, which I think was transformational back in the ‘70s, set it up so women could have competitive sports right alongside men,” said Texas state Sen. Charles Perry (R), who is carrying his state’s version of the legislation. “I don’t know that there’s any more important thing because at the end of the day this is about women being able to compete on a level playing field with their peers.”

The Texas measure, Senate Bill 29, has been listed as a priority of Lt. Gov. Dan Patrick (R), who presides over the state Senate.

“That’s a clear indication it’s getting out of the Senate. I think that the House will pass it out and it will get signed by the governor,” Perry said.

Last year, 300 female athletes signed a letter to the NCAA in support of Idaho’s legislation. In Connecticut, female runners have filed a lawsuit arguing that including transgender athletes in their races costs them the chance to win meets. The Biden administration last month withdrew the Trump administration’s support for that suit.

“The real-life examples of girls that are actually losing in these competitions to male athletes make this not hypothetical,” said Emilie Kao, director of the Richard and Helen DeVos Center for Religion and Civil Society at the conservative Heritage Foundation. “Everyone should have an opportunity to compete, so males who identify as female can still compete in athletics, just not in female competition.”

But supporters of transgender rights say the bills are a solution for a problem that does not exist.

“They’re trying to find something where people’s fear will still overwhelm their wish to be inclusive, and they work very hard to spread fear and misinformation to try to keep equality from spreading too far,” said Kate Oakley, state legislative director and senior counsel at the Human Rights Campaign.

The new spotlight on transgender people’s role in society is the latest outgrowth of a decades-long fight over LGBT rights that has pitted equality activists against religious conservatives.

After the Supreme Court ruled that bans on same-sex marriage were unconstitutional, conservatives began backing religious freedom measures that would allow individuals or businesses to deny services to people based on their sexual orientation. Blowback against Indiana’s version of the bill, signed into law by then-Gov. Mike Pence (R), scuttled plans in other states.

The following year, North Carolina became the center of attention as legislators advanced a bill banning transgender people from bathrooms that conformed to their gender identity. That “bathroom bill” played a role in Gov. Pat McCrory’s (R) defeat at the hands of Gov. Roy Cooper (D).

Some proponents of the new restrictions on transgender people say the bills are a reaction to legislation and legal decisions that are changing societal views of gender and gender identity.

Others say they see the opening salvos of a new culture war.

“We have a narrative that’s developed on the progressive side that there’s gender and they don’t mean anything, that you can be whatever you want to be today,” Perry said, adding that his constituents “don’t understand why a boy would want to play in a girl’s sport.”

LGBT rights advocates say legal challenges are inevitable if any of the state bills become law.

American attitudes toward transgender people have evolved substantially in recent years as they become more prominent in culture. About two-thirds of Americans support laws banning discrimination against transgender people, according to a June survey conducted by the Kaiser Family Foundation. About half say society has not gone far enough in accepting people who are transgender, up 10 percentage points from a Pew Research poll conducted in 2017.

Greater awareness of transgender people is likely to lead to greater acceptance, LGBT advocates say. In turn, changing attitudes are likely to complicate the politics of legislation impacting transgender rights.

“The increased cultural awareness around transgender people and who they are and what they’re about has meant that it’s harder for our opposition to drum up that same amount of disdain they thought they were going to have,” Oakley said.