The number of Americans who live in rural areas declined in the last decade, the first time in history that the nation’s rural population dropped between one U.S. census and the next.

A new report from Kenneth Johnson, a demographer at the Carsey School of Public Policy at the University of New Hampshire, finds the number of Americans who live in rural communities dropped by 289,000 over the last decade, or just about 0.6 percentage points, not much more than a rounding error among the 46 million people who live in rural areas.

But it marks a significant slowdown from recent decades, when rural America added population. Between 1990 and 2000, rural communities added 3.4 million residents; those same areas added 1.5 million residents between 2000 and 2010. 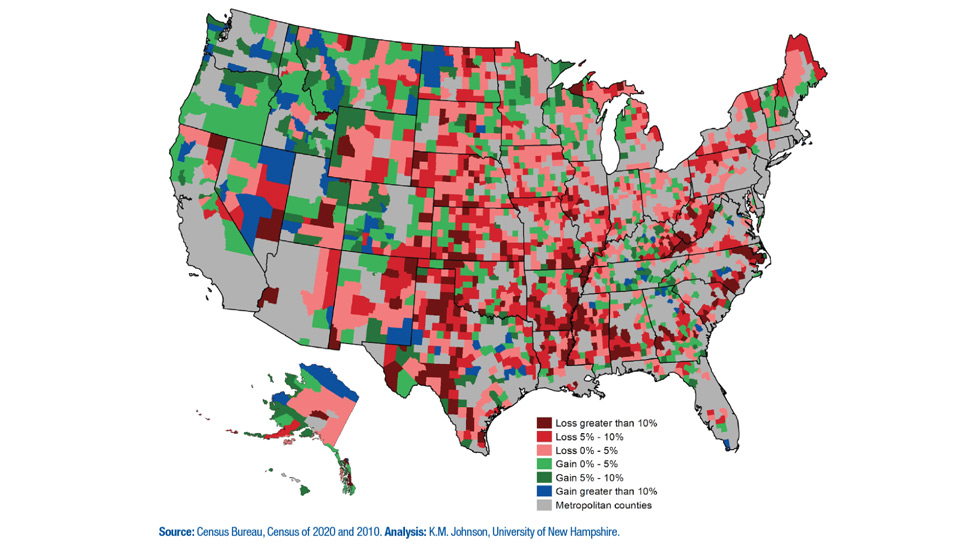 “The actual size of the loss isn’t a particularly big deal,” Johnson said in an interview. “The fact that it actually happened, that rural America as a whole lost population, reflects a significant change. The question is, is it just a short-term thing, or is it a longer-term thing?”

The blame for the unprecedented population loss, Johnson said, is a confluence of factors, many of which stem from the Great Recession a decade ago.

The recession caused both less migration around the entire country and lower birthrates that have contributed to what demographers call the baby bust, in which women of childbearing age are waiting longer to have their first children and end up having fewer children than their predecessors in earlier generations.

American migratory patterns have been the same for almost a century: Younger people tend to move out of both urban cores and rural areas and toward the suburbs as they age.

But less migration has meant more people are staying in urban areas, where the population tends to be younger than average. Those younger people are having children, albeit both later in life and in fewer numbers, contributing to the growing population in the country’s largest cities.

In rural areas, the population tends to be older, with fewer young people around to have children. About 510,000 people moved out of rural areas over the last decade, but natural population increases — or births — added just 221,000 people, not enough to offset those who moved elsewhere.

The trend of American mobility seemed to begin to reverse in the second half of the decade, Johnson said. But the trend of fewer children being born did not.

“The number of births continued to diminish throughout the decade,” he said. “Most [rural areas] now have more people dying in them than being born. Partially that’s because of the fertility slowdown because of the great recession and its aftermath, but partly it’s because the population is older.”

The data, compiled from the U.S. census conducted in 2010 and 2020, almost entirely predates the coronavirus pandemic. By Census Day, April 1, 2020, only about 1,000 Americans had died of a virus that has now claimed nearly a million lives.

About one-third of rural counties gained population over the last decade, notably in areas that are attractive to retirees and vacationers. About 60 percent of those counties, mostly in rural parts of Pacific Coast states, the Mountain West, New England and the Southeast, added population.

The long hangover from the recession that has cost rural America hundreds of thousands of residents caused overall growth across the United States to slow to levels not seen since the wake of the last massive economic crisis, the Great Depression almost a century ago. Johnson said many communities will now struggle to rebound over the long term.

“We’ll probably see some recovery in the pop growth rates” in counties adjacent to larger urban areas, he said, adding, “It wasn’t a good decade for rural America.”

Police group speaks out against ‘brutal assault’ in Tyre Nichols case: ‘It is sickening’

With ChatGPT rising in popularity, what’s a parent to do?