The number of undocumented immigrants deported by President Obama is falling and could hit a 10-year low in 2016 just as the issue heats up in this year’s presidential race.

Immigrations and Customs Enforcement (ICE) figures from June suggest 230,000 people could be removed or returned from the country by the end of the fiscal year next month, slightly fewer than the 235,413 deported in 2015. That was the lowest number since 2006.

{mosads}While the total does not include people caught attempting to illegally cross borders, it still highlights a change in enforcement patterns under Obama.

Obama was once criticized by Rep. Luis Gutiérrez (D-Ill.) on the House floor in 2014 as the “deporter-in-chief” because of the high number of deportations under his administration.

In 2012, removals under the Obama administration peaked, with ICE reporting that 409,849 people were sent back to their home countries.

The rising number coincided with efforts to reach a deal in Congress on comprehensive immigration reform that would have included a pathway to legal status for undocumented workers in the country. Republicans were demanding that Obama toughen enforcement.

After the legislation failed, Obama shifted his strategy, pursuing executive actions that allowed some groups of undocumented immigrants to remain in the country.

The White House also exercised executive authority by changing its enforcement priorities to violent offenders, which resulted in a drop in the number of people being arrested within the interior country and deported.

“[The Department of Homeland Security] has placed more of a priority on border removals and has tried to scale back on the interior,” said Faye Hipsman, a policy analyst at the Migration Policy Institute.

While total deportations decreased, the proportion of criminal aliens as a percentage of removals increased from 31 percent in 2008 to 59 percent in 2015. 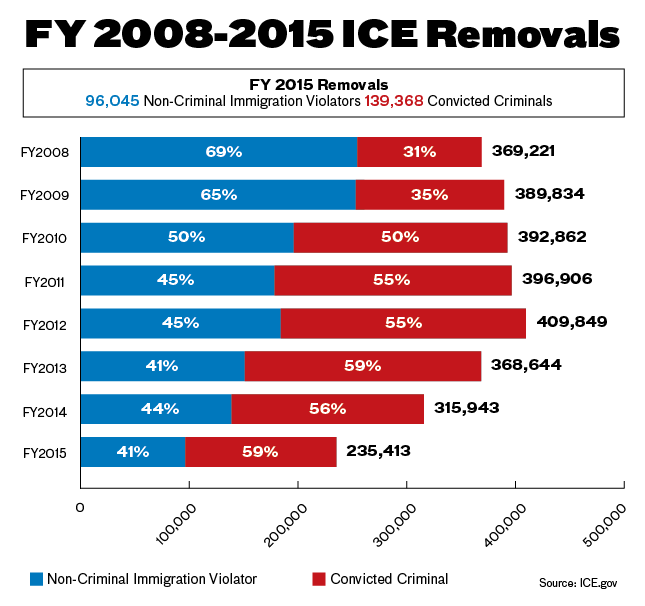 As Obama prepares to leave office, it is Donald Trump who is the center of attention on immigration.

On Wednesday, the Republican presidential nominee is scheduled to give an address clarifying his position on immigration.

Trump has repeatedly signaled that a softer line on immigration could be coming, even as his campaign has insisted that there will be no change in policy.

A big question for Trump is how he handles the issue of the approximately 11 million undocumented workers in the country right now.

Trump floated an Obama-like plan last week, saying he would do “the same thing” as Obama in focusing on violent offenders, though he said he would do so “with a lot more energy.”

Surrogates have at times spoken favorably of Obama’s deportation record, even as they criticize the president’s executive actions.

Trump’s campaign has focused on the criminal danger posed by illegal immigration.

“Of all my travels in this country, nothing has affected me more, nothing even close I have to tell you, than the time I have spent with the mothers and fathers who have lost their children to violence spilling across our borders, which we can solve,” Trump said in accepting the nomination at the Republican National Convention in July.

Most studies have concluded that immigrants, in the country legally or not, are significantly less likely to commit crimes than native-born residents.

Most polls show Clinton with around 80 percent approval with the constituency, while Trump polls in the low teens.

That’s one reason to think Trump will at least change the tone of his approach on Wednesday.

The question is whether it will help him with Hispanic voters.

“It’s not a pivot or new approach to Latino and immigrant voters. I just don’t buy it. More importantly, the voters aren’t going to buy it,” Gutiérrez said last week. He argued that Trump’s real target is “moderate Republican voters who are uncomfortable with the racism.”

GOP critic dials up pressure on McConnell: ‘Tired of caving’