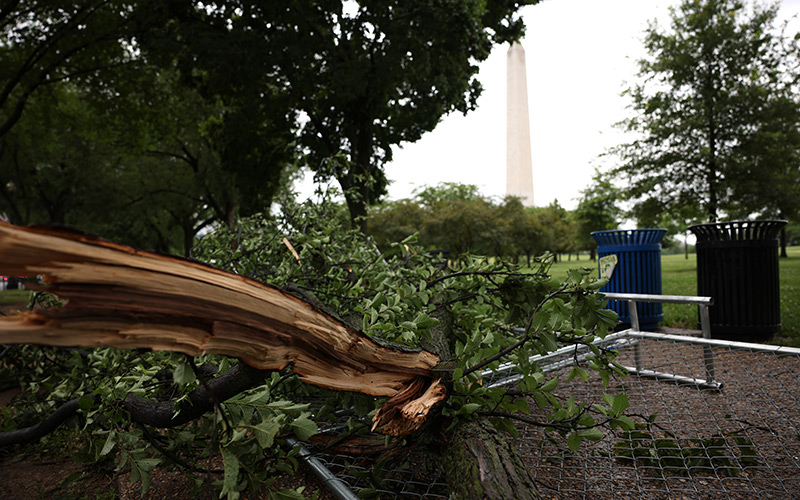 A knocked down tree blocks a sidewalk near the Washington Monument on Friday following a severe thunderstorm the night before. Investigators from the National Weather Service are considering it to be a possible tornado. Anna Moneymaker/Getty Images 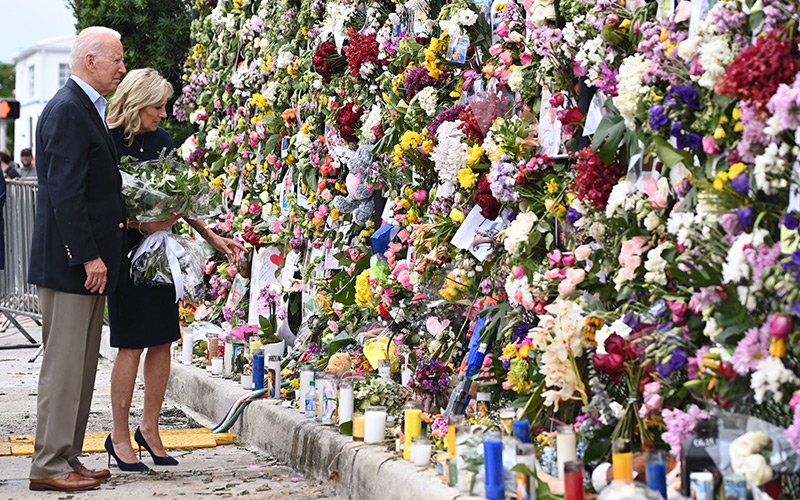 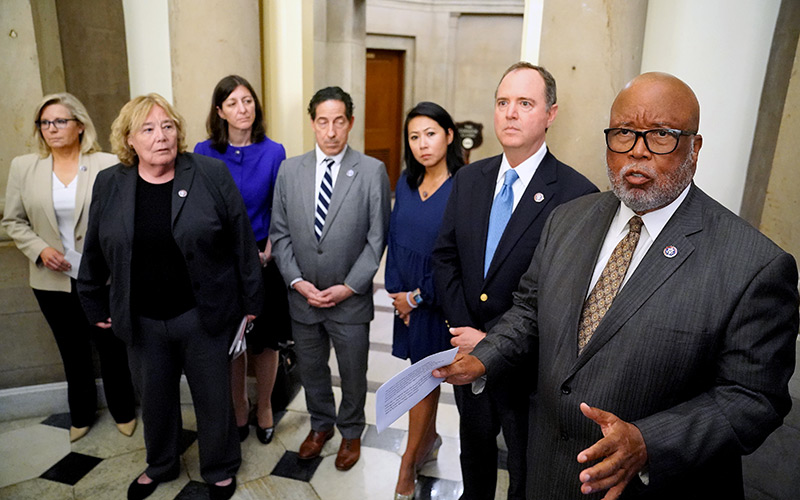 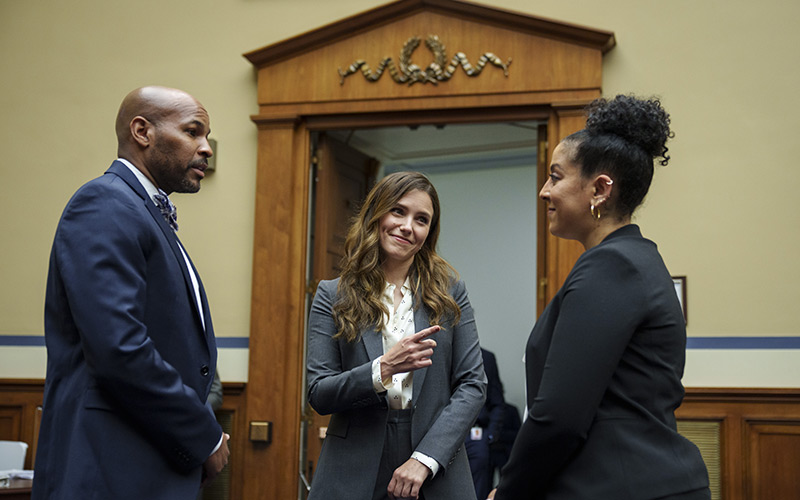 Former Surgeon General Jerome Adams, actress and activist Sophia Bush and epidemiologist Jessica Malaty Rivera speak with each other before the start of a Select subcommittee on the Coronavirus Crisis hearing on Thursday about how to counter vaccine hesitancy. Drew Angerer/Getty Images 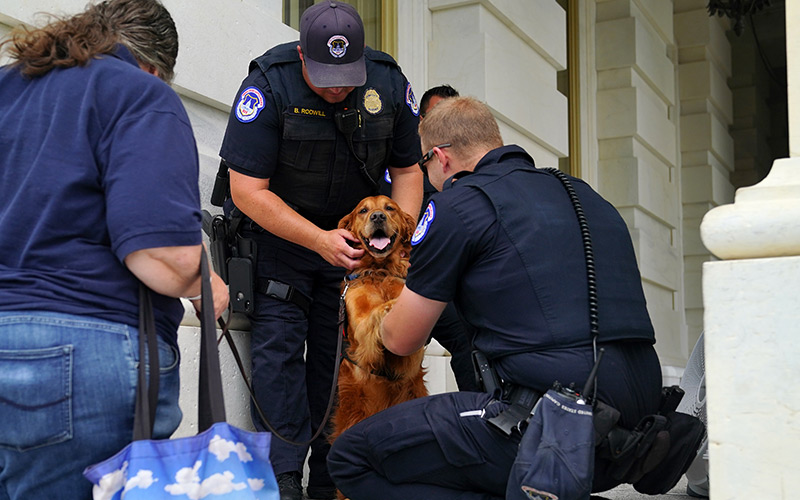 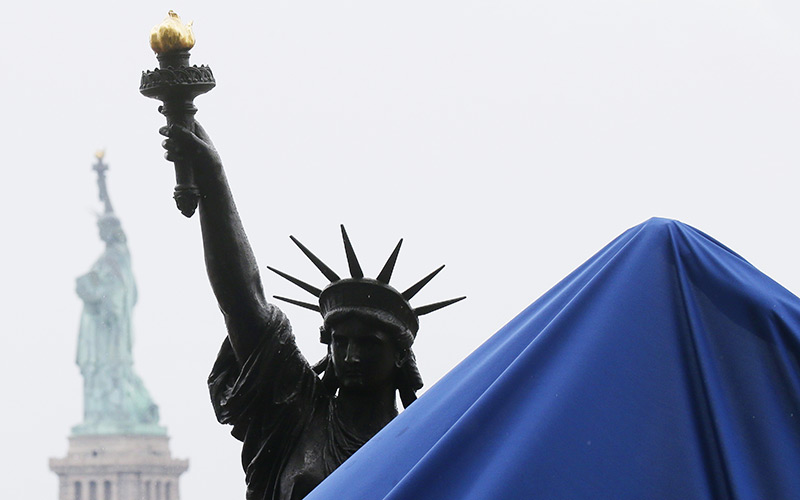 Workers prepare for an unveiling ceremony for Lady Liberty’s “Little Sister” statue from France after it is installed on Ellis Island on Thursday in New York. John Angelillo/UPI Photo 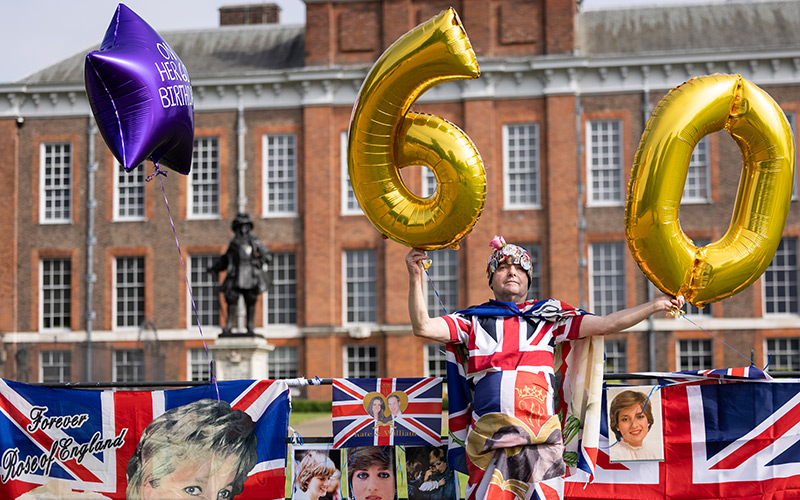 Royal fan John Loughrey poses with balloons as supporters gather to mark what would have been the 60th birthday of Princess Diana at Kensington Palace in London on Thursday. Leon Neal/Getty Images 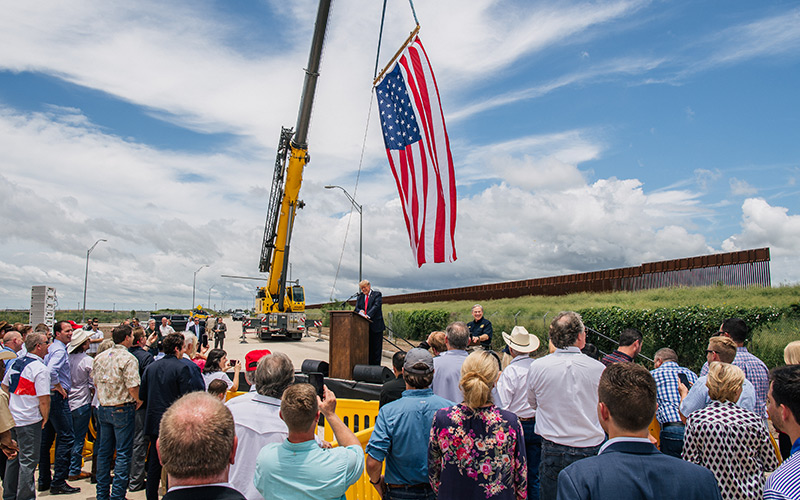 People listen to former President Trump’s address during a tour of an unfinished section of the border wall on Wednesday in Pharr, Texas. Brandon Bell/Getty Images 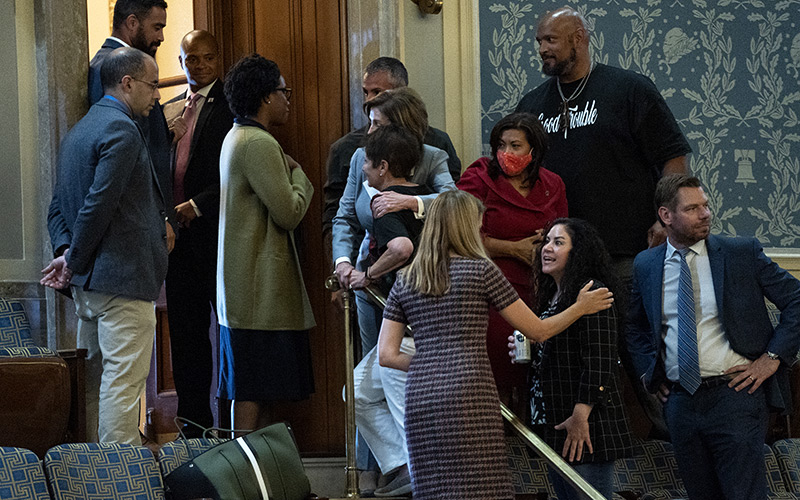 Speaker Nancy Pelosi (D-Calif.) hugs Gladys Sicknick on Tuesday as the House votes for a select committee to investigate the Jan. 6 attack on the Capitol. Sicknick is the mother of U.S. Capitol Police Officer Brian Sicknick, who died as a result of the attack. Greg Nash 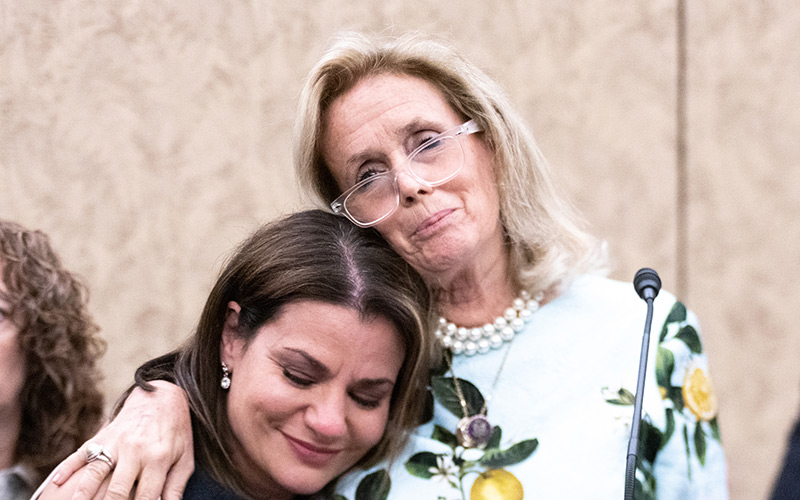 Rep. Debbie Dingell (D-Mich.) comforts a survivor of a drunk-driver accident at a press conference on Wednesday. Julia Nikhinson 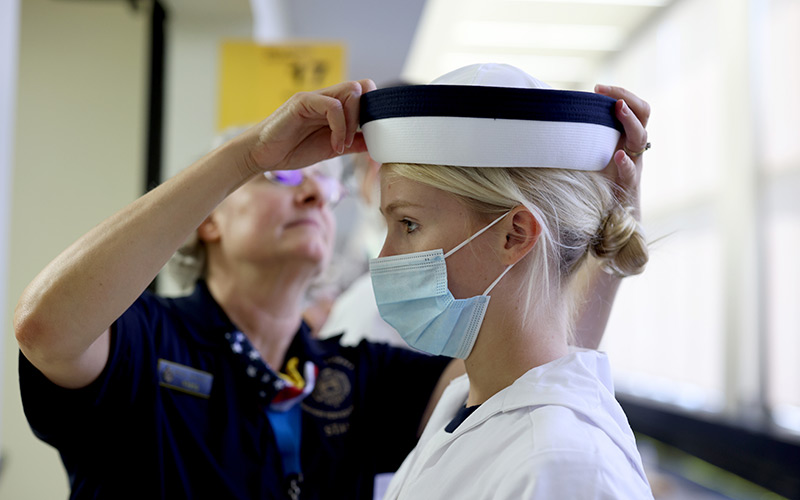 A plebe is given a cover on Induction Day at the U.S. Naval Academy Wednesday in Annapolis, Md. More than 1,100 new midshipmen arrived as part of the Naval Academy’s class of 2025. Anna Moneymaker/Getty Images 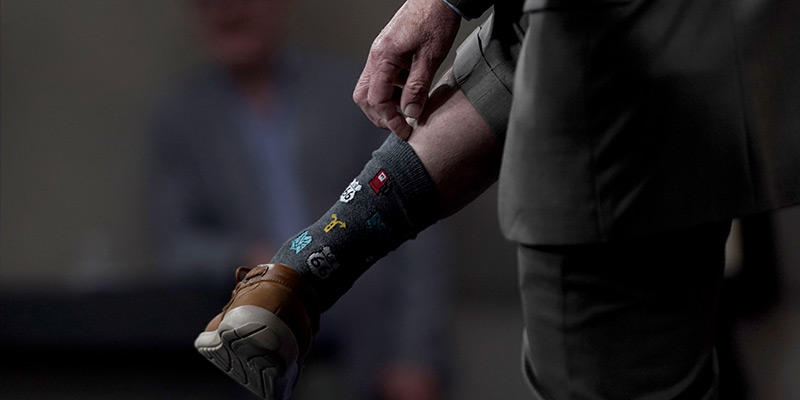 Rep. Peter DeFazio (D-Ore.) shows off his Route 66 socks before addressing reporters during a press conference on Tuesday to discuss the INVEST in America Act. Greg Nash 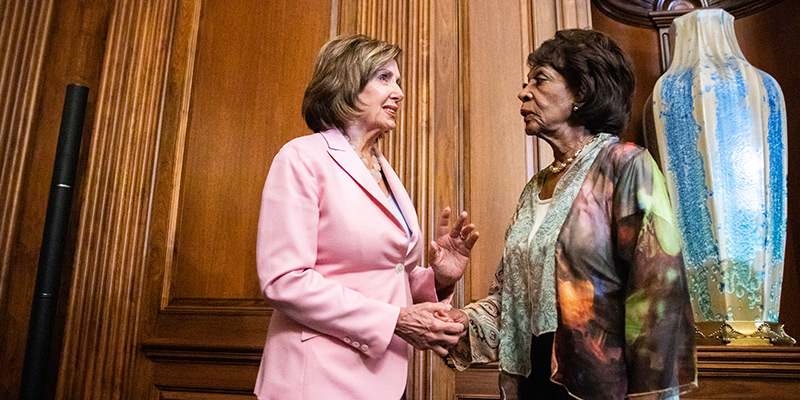 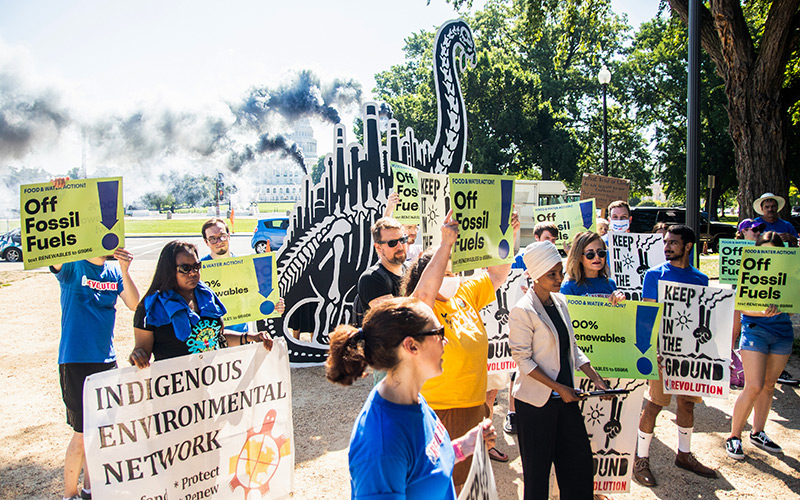 Rep. Ilhan Omar (D-Minn.) is seen at the National Mall on Tuesday with protesters in favor of ending fossil fuel subsidies. Julia Nikhinson 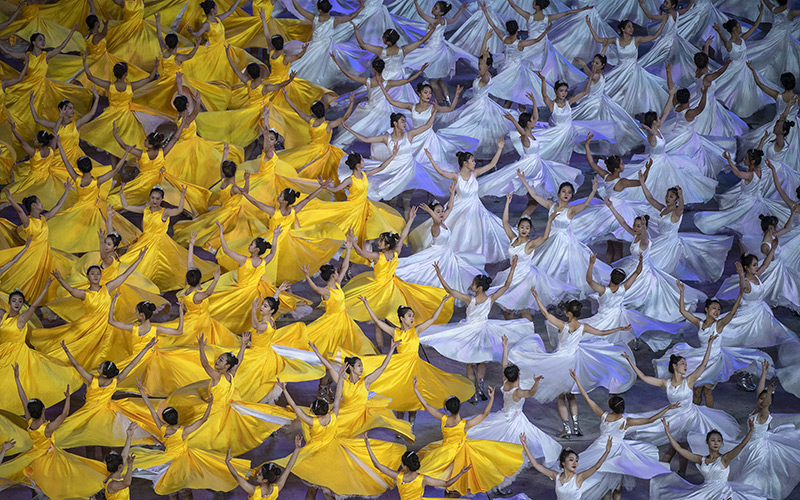 Dancers perform at a mass gala marking the 100th anniversary of the founding of the Chinese Communist Party on Tuesday at the Olympic Bird’s Nest stadium in Beijing. Kevin Frayer/Getty Images

Photos of the Week: Hurricane Fiona, the queen’s funeral and a beagle