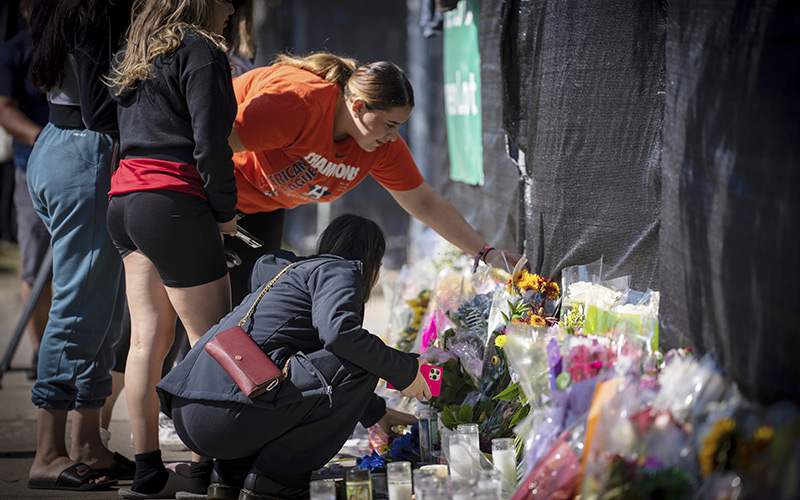 Stacey Sarmiento places flowers at a memorial in Houston on Nov. 7 in memory of her friend, Rudy Pena, who died in a crush of people at the Astroworld music festival on Nov. 5. Associated Press/Robert Bumsted 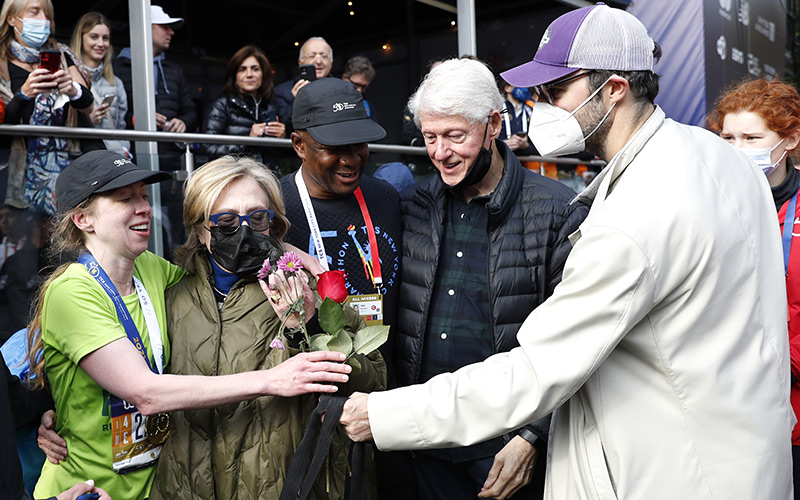 After crossing the finish line of the New York City Marathon, Chelsea Clinton receives flowers from her husband, Marc Mezvinsky, while standing with her parents, Hillary and Bill Clinton, as well as marathon director Ted Metellus on Nov. 7. John Angelillo/UPI 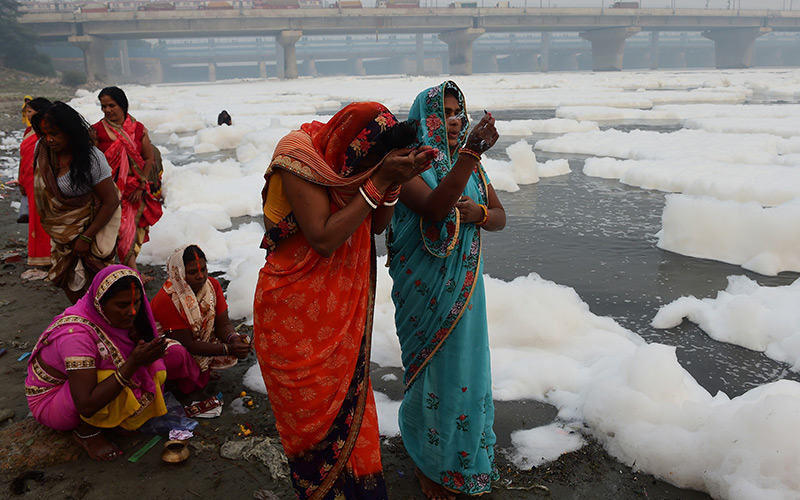 Toxic foam floats on the surface of the polluted Yamuna River as Hindu devotees pray after taking a bath as part of the rituals of the four-day “Chhath Puja” festival celebrations in New Delhi on Nov. 8. The ancient Hindu festival dedicated to the sun god is celebrated for well-being, development and prosperity of family members. Abhishek/UPI Photo 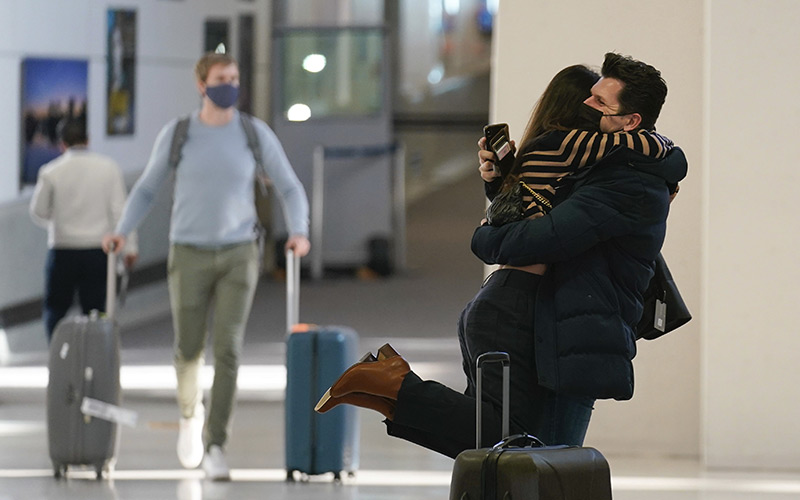 Natalia Abrahao is lifted up by her fiancé Mark Ogertsehnig as they greet one another at Newark Liberty International Airport in Newark, N.J., on Nov. 8. Pandemic travel restrictions have made their recent meetings difficult and infrequent. The U.S. lifted restrictions Monday on travel from a long list of countries including Mexico, Canada and most of Europe, setting the stage for emotional reunions nearly two years in the making and providing a boost for the airline and tourism industries decimated by the pandemic. Associated Press/Seth Wenig 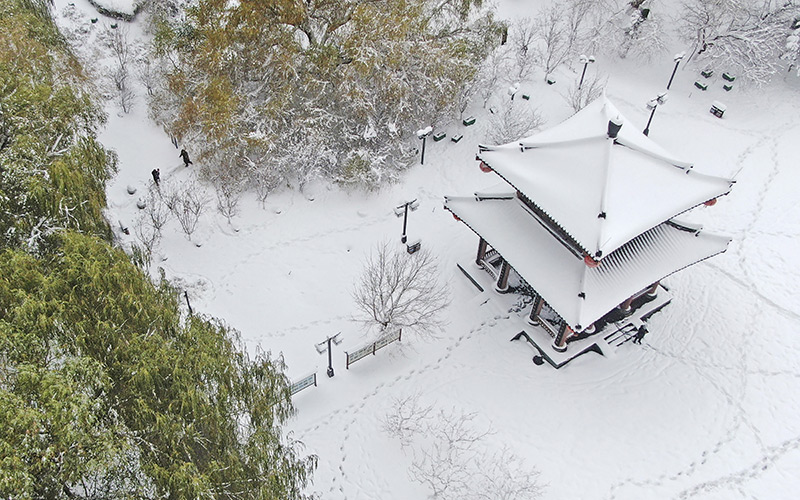 A snow-covered pavilion is seen at a park in the Heping District in Shenyang, China, on Nov. 9. Yang Qing/Xinhua via AP 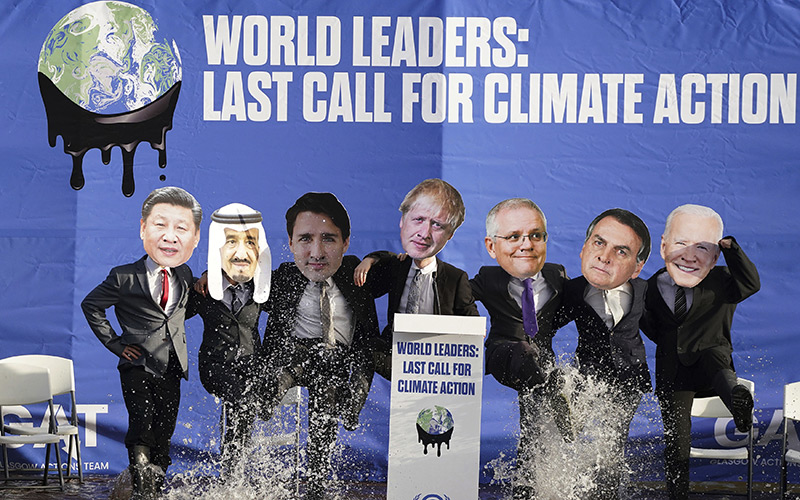 A replica of the COP26 summit’s main United Nations negotiation stage, carrying activists dressed as world leaders, is half-sunk in the Clyde Canal during the COP26 summit in Glasgow, Scotland, on Nov. 9. Andrew Milligan/PA via AP 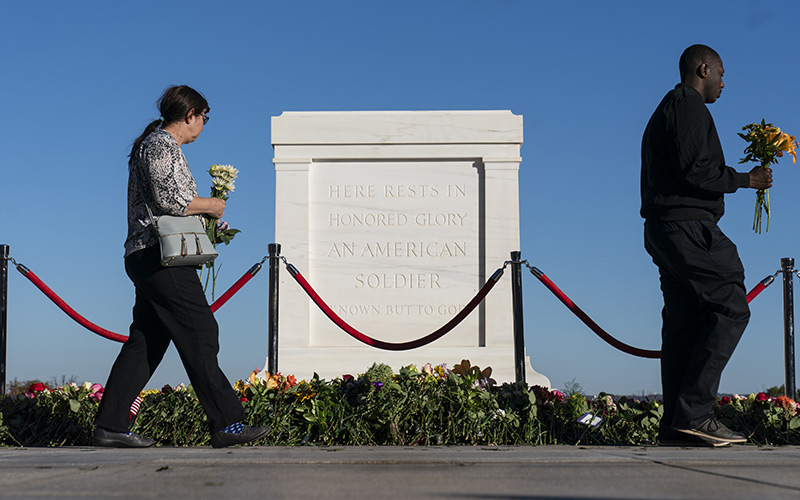 People walk to place flowers during a centennial commemoration event at the Tomb of the Unknown Soldier in Arlington National Cemetery on Nov. 9 in Arlington, Va. Associated Press/Alex Brandon 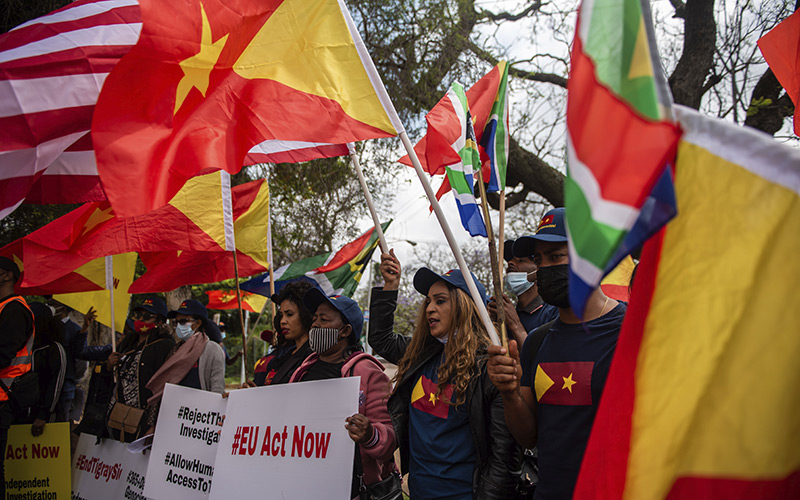 Tigrayan Community Association in South Africa members take part in a protest outside the U.S. Embassy in Pretoria, South Africa, on Nov. 10. The group is calling for the immediate end to Ethiopia’s ongoing internal conflict. Associated Press/Alet Pretorius 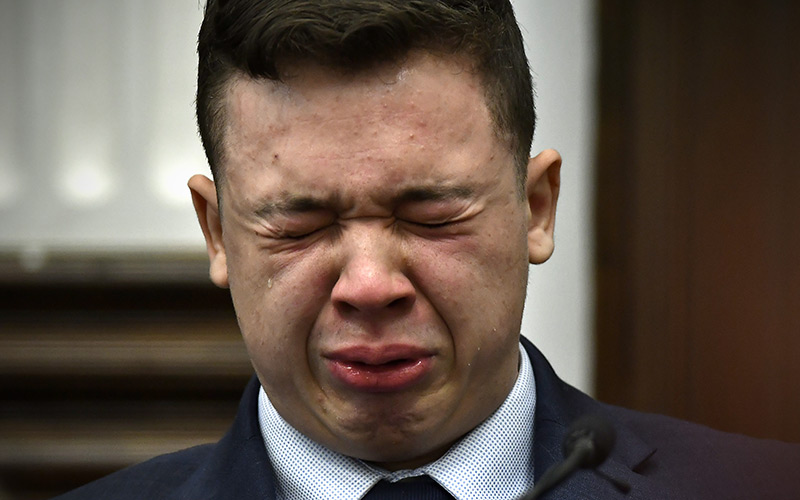 Kyle Rittenhouse breaks down on the stand as he testifies about his encounter with the late Joseph Rosenbaum during his trial at the Kenosha County Courthouse in Kenosha, Wis., on Nov. 10. Rittenhouse is charged with killing two people and wounding a third during a protest over police brutality in Kenosha last year. Sean Krajacic/The Kenosha News via AP 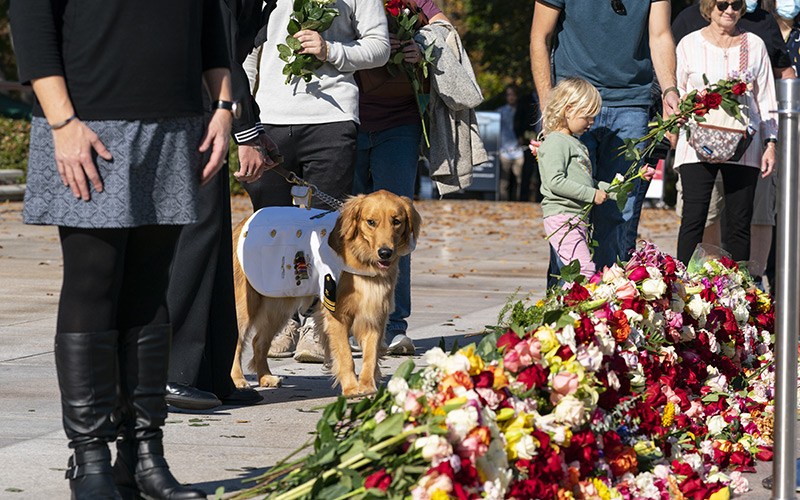 Lt. Cleo, a service dog for U.S. Navy Petty Officer 2nd Class Andrew Armstrong, walks as they place a flower during a centennial commemoration event at the Tomb of the Unknown Soldier in Arlington National Cemetery on Nov. 10 in Arlington, Va. Associated Press/Alex Brandon 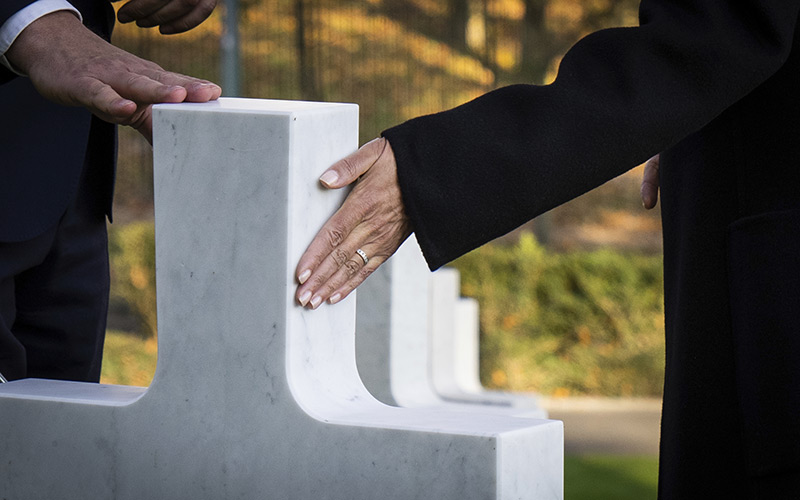 Superintendent Keith Stadler, left, and Vice President Harris touch a headstone belonging to Inez Crittenden during a tour of Suresnes American Cemetery in Suresnes, France, on Nov. 10. Crittenden, of Oakland, Calif., led a team of 232 bilingual switchboard operators known as the “Hello Girls,” who made more than 26 million calls by the war’s end and were vital to American success in Europe. With the passage of the 1977 G.I. Improvement Bill, the headstone has subsequently changed from “civilian” to “Chief Operator of the Signal Corps,” reflecting her military rank. Sarahbeth Maney/The New York Times via AP 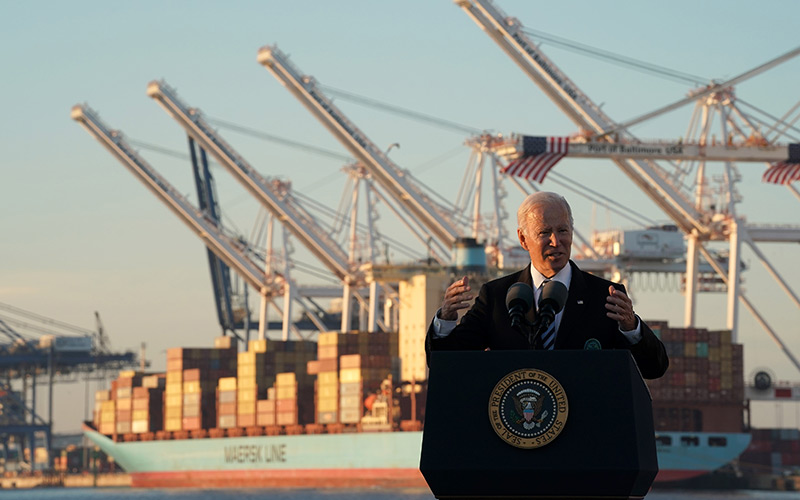 President Biden discusses the bipartisan infrastructure deal during an event at the Port of Baltimore’s Dundalk Marine Terminal in Baltimore on Nov. 10. Greg Nash 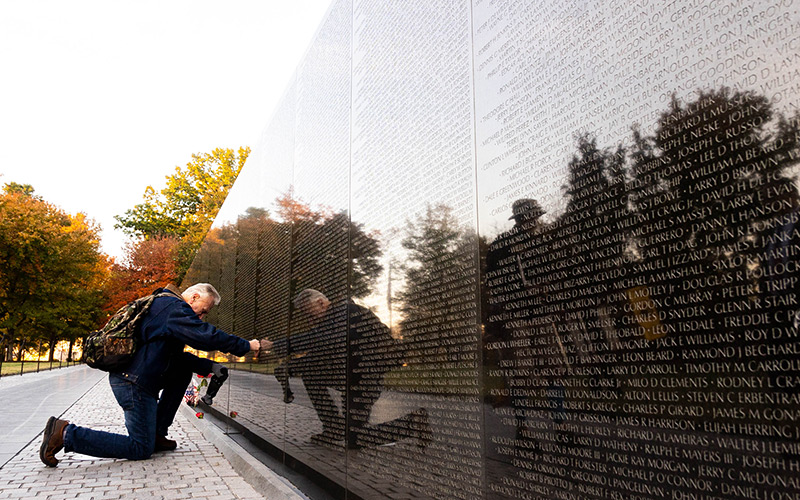 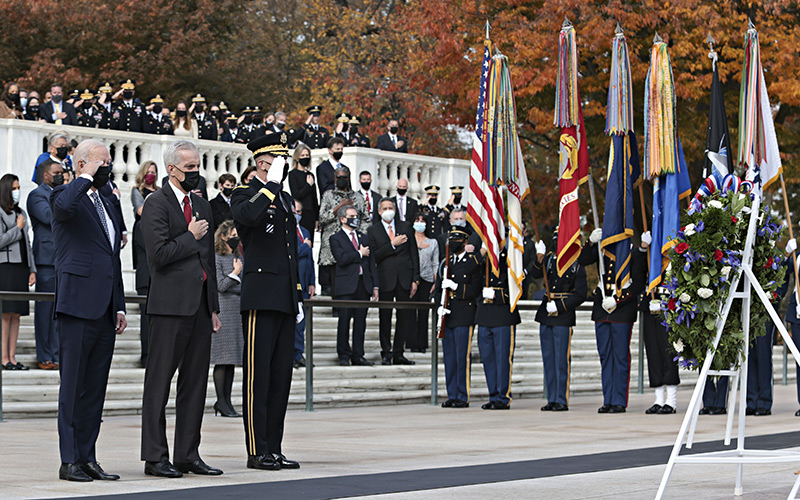 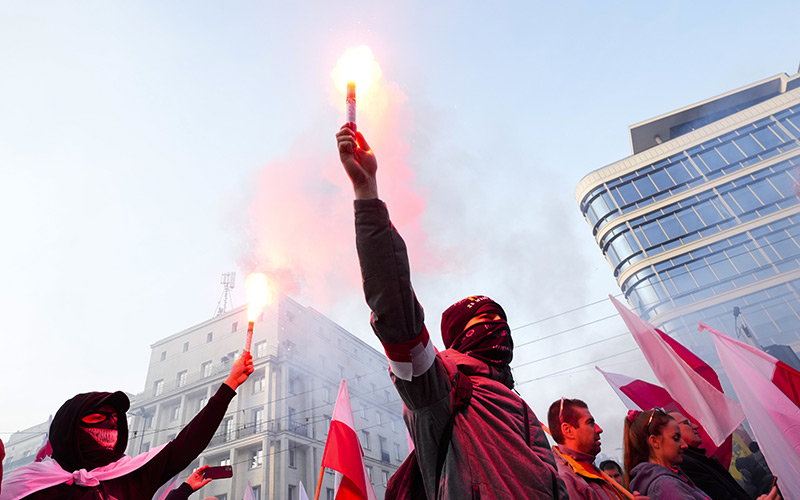