Hollywood pumps cash to save Senate majority for Democrats

Hollywood is pouring money into the midterm elections, with A-listers such as Leonardo DiCaprio, Gwyneth Paltrow, Julia Louis-Dreyfus and Barbra Streisand all coughing up blockbuster bucks.

The donations are largely aimed at keeping the Senate in Democratic hands. Republicans, who have the political winds at their backs, need to pick up six seats to win control of the upper chamber.

{mosads}Streisand, a longtime Democratic donor, opened her checkbook in several competitive Senate races, according to Federal Election Commission data collected and analyzed by The Hill.

One of the biggest recipients of the entertainment industry’s dollars is Kentucky Democrat Alison Lundergan Grimes, whose is in a tight battle against Senate Minority Leader Mitch McConnell (R).

While the Bluegrass State race has attracted lots of attention, less-headline-making political matchups also caught the eye of some famous names. Louis-Dreyfus, who plays a fictional vice president on HBO’s “Veep,” waded into the real-life political world with a $2,600 donation to Rep. Lois Capps’s (D-Calif.) campaign coffers. 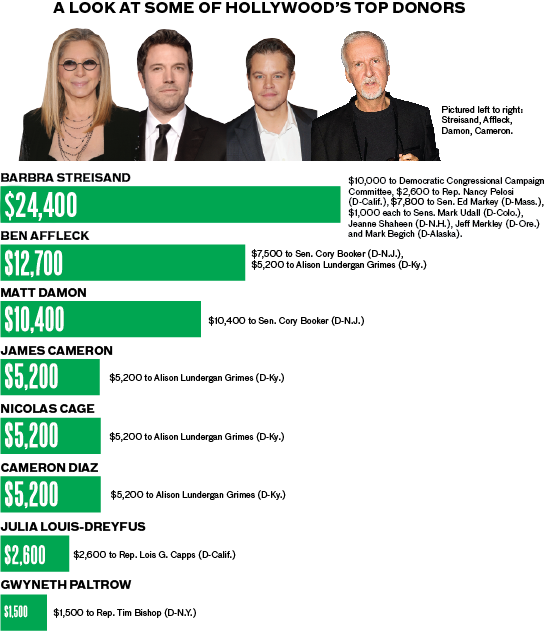 Meanwhile, Diane Lane, “The Office’s” Rainn Wilson, comedienne Lily Tomlin, and Eva Longoria were just a few of the celebs to dish out money to author Marianne Williamson’s failed California House bid. Despite the household names backing the independent’s run to replace the retiring Rep. Henry Waxman (D), Williamson came in fourth in the June primary.

“In general, midterm elections do not bring a lot of celebrity donations,” Steven J. Ross, a history professor at the University of Southern California said. The author of the Pulitzer Prize-nominated, “Hollywood Left and Right: How Movie Stars Shaped American Politics,” says midterm elections are considered “less glamorous” to stars. “I think if they give, they want to give in a celebrity context, which means the presidential election.”

Democrats, including President Obama, have expressed concern about turnout in 2014.

Earlier this year, Obama told donors, “We know how to win national elections. But all too often it’s during these midterms where we end up getting ourselves into trouble because, I guess we don’t think it’s sexy enough.”

Many stars were more than happy to give to Sen. Cory Booker. The New Jersey Democrat, who ran for the Senate seat that was vacated upon the death of former Sen. Frank Lautenberg (D), won an October special election. Booker’s campaign counted Matt Damon and Affleck (who together hosted a fundraiser for him), Garner, fashion designer Tommy Hilfiger, “The Hunger Games” screenwriter Billy Ray, Streisand and Ron Howard among its donors. 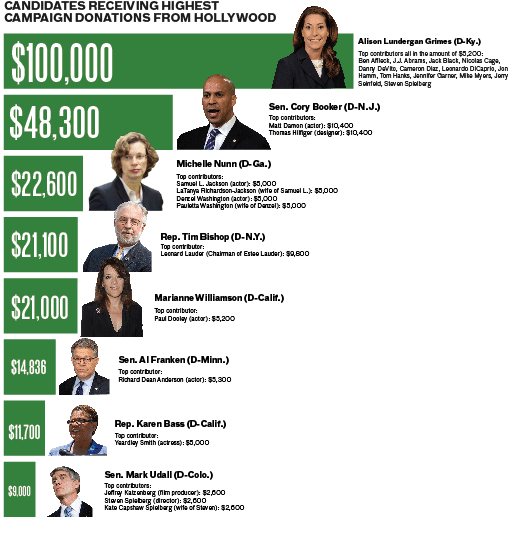 Republican candidates were far less likely to feel the love from Hollywood. Tony Strickland, a Republican running for an open House seat in California to succeed the retiring Rep. Buck McKeon (R), received a $500 donation in May from “Charles in Charge’s” Scott Baio.

All this partisan giving could come at a price for celebrities who crave mass appeal at the box office. But veteran Hollywood publicist and author Michael Levine says unless one of his clients is donating to someone “tremendously controversial,” he wouldn’t necessarily advise against it.

“I think it’s completely dependent on their long term agenda,” Levine says of celebrities. “If their long-term agenda is to be a political, cultural force in America, then making donations is fine. If having access to politicians and leaders is important to them, then I think it’s fine.”

“The politics aspect is more personal — that’s something that an artist or celebrity themselves just believe in,” platinum-selling hip hop star Akon recently told The Hill when asked if celebrities are concerned about alienating their fan base when making political donations.

The “I Wanna Love You” singer said, “Most celebrities they always go after what they believe in, whether it’s political, non-political, whatever the case may be. It’s just a sense of passion they just want to fill.”