Is career and technical education more than another fad?

Over the past couple years, career and technical education (CTE) has garnered a lot of attention. Politico reported last year that 49 states and Washington DC enacted 241 CTE-related laws, executive actions, and budget provisions in 2017. A 2018 AEI study found that CTE was the only education issue supported by a majority of gubernatorial candidates. Meanwhile, a 2018 analysis revealed that the number of high school students concentrating in career education rose 22 percent, to 3.6 million, during the past decade.

All this raises a big question, given education’s long experience with fads and shifting sentiment: Is the boom in career and technical education one more fad, or does it reflect something more substantial? That answer matters for how much attention this push deserves from educators, parents, and policymakers.{mosads}

In a new American Enterprise Institute research paper we take a stab at answering this question, by examing the mainstream U.S. media attention devoted to career and technical education over the past two decades — and comparing that to the patterns of attention devoted to other popular 21st-century education reforms.  What did we find?

For starters, interest in CTE has grown markedly and steadily over the better part of two decades. The scope and sustained nature of the growth is striking. 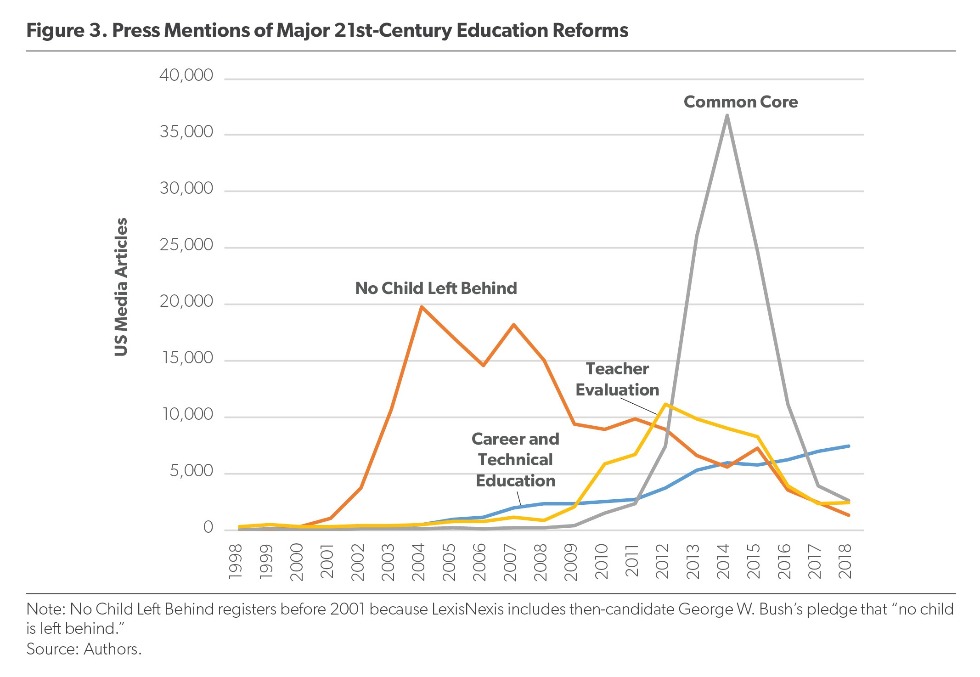 Since 1998, the number of mainstream U.S. media articles mentioning career and technical education has increased more than a hundredfold. Since just 2012, media mentions have doubled.

It’s worth noting that this heightened interest in career and technical education is part of a larger trend entailing increased attention to skills training. For example, media mentions of workforce develop­ment increased by a factor of 13 in the past two decades.

How typical is sustained build when we compare career and technical education to the life cycle of other prominent 21st-century education reforms?

At their peaks, No Child Left Behind and Common Core received three to five times as much media attention as CTE garnered last year. At its height in 2012, teacher evaluation received 50 percent more attention than CTE received last year. Yet, while it has not come anywhere close to those peaks, career and technical education has shown a markedly different public profile than these other reforms — all of which exploded to public consciousness over a span of three or four years, and then declined. Career and technical education, on the other hand, has seen a long, dramatic, and uninterrupted build over an extended period of time.

Given this long pattern and an attendant lack of controversy, CTE seems unlikely to experience the rapid declines in public interest endured by these more polarizing reforms.

Indeed, career and technical education has gotten to the point where it is steadily outpacing the attention devoted to other familiar education improvement strategies, such as school vouchers, school turnarounds, and personalized learning.

Given CTE’s prominence in education, a useful perspective-gathering exercise is asking how it stacks up against household names. So what if we compared CTE to someone with a high media presence, someone totally outside of education?  What if we compared CTE to . . . Kim Kardashian? Remarkably, it turns out that CTE carries the day. Career and technical edu­cation’s press mentions outpaced Kardashian’s by about 7,500 to 5,000 in 2018.

What does all this mean?

For one, career and technical education has become a prominent part of the national conversation. While No Child Left Behind and Common Core were much more prominent for a brief time, that was largely due to their polarizing nature — which ultimately helped fuel their rapid retreat from public consciousness. By contrast, career and technical education has seen well over a decade of steady growth in public interest.

It seems a good bet that career and technical edu­cation’s gradual build will give it more staying power than other contested, high-profile 21st-century reforms. For better or worse, CTE appears poised to be a focal point in the post-NCLB, post–Common Core world.

Frederick M. Hess is director of education policy studies at the American Enterprise Institute. RJ Martin is a research assistant at AEI.

Colleges should do more to slow down ‘fast thinking’

by Glenn C. Altschuler and David Wippman, opinion contributors 7 days ago
Education  /  7 days ago
See All