US crude oil setting sail for China in record numbers

United States crude oil exports are soaring this year, and China is its single largest buyer for waterborne sales. This is likely to continue but it is important to separate temporary factors from longer term trends.

The U.S. industry was hard hit by Hurricane Harvey, which cut refinery runs much more than production. That led to a backlog of crude inventory. Some of that is currently being exported and is likely to continue to support strong exports over the next few months until the U.S. rebalances.

China is the top destination for U.S. waterborne crude exports in 2017.

Analysis of U.S. EIA, Census and S&P Global Platts cargo tracking cFlow data reveals that the U.S. exported on average 203,000 barrels per day of crude oil to China in the first 10 months of 2017, according to analysis by S&P Global Platts Analytics. 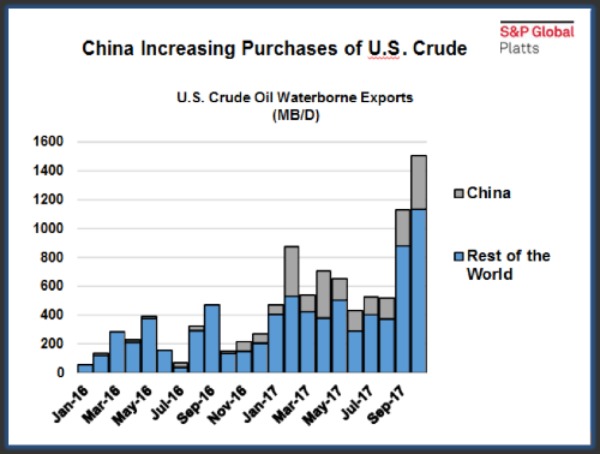 The main reason the United States has become a major crude exporter is the rapid growth of U.S. light, sweet shale crude production coupled with a U.S. refining system that operates most economically with a heavier slate. Once restrictions on U.S. exports were lifted in late 2015, exports increased rapidly to destinations around the world.

U.S. light, sweet crude is readily available for export from multiple terminals, is shipped in vessels of all sizes, is easy to process, helps Chinese refiners to meet tightening product sulfur specifications and, importantly, it is priced to be exported.

With Chinese refinery runs increasing, refiners there are looking for crude from all potential sellers. And with OPEC still restraining its output, rising U.S. sales are a logical choice.

In 2016, just four vessels left the U.S. destined for China. But in 2017, China has become the largest single buyer of U.S. seaborne crude.

According to S&P Global Platts’ cFlow vessel tracking data, which gives a real-time view into seaborne crude trade flows, vessel-level volumes and details of export and destination ports, October was a record high with nine ships carrying a total of 369,000 barrels a day of crude oil leaving the U.S. for China.

Important as China is to the U.S. as a growth market, it’s worth bearing in mind that when it comes to oil, China buys from a diverse range of countries. The baseload remains Middle Eastern medium-sour grades, accounting for around 44 percent of seaborne imports in 2017.

But their share is declining in favor of lighter and lower-sulfur crudes from not only the U.S. but also West Africa, the North Sea and elsewhere.

According to S&P Global Platts’ cFlow data, the U.S. only accounted for 1.2 percent of Chinese seaborne imports in the first 10 months of 2010, well below other suppliers of lighter, sweeter crudes, such as the United Kingdom and the Congo Republic, which accounted for 2.6 percent and 2.0 percent, respectively, of imports.

When it comes to oil, China has many options, and the price of U.S. crude after paying for the cost of shipping it from the U.S. Gulf Coast will need to remain attractive for the U.S. to compete.

Why we must nationalize Big Oil

Electric cars are unaffordable for many Americans. Biden is trying to impose them anyway

by David Ditch, Opinion Contributor 2 days ago
Energy and Environment  /  2 days ago
See All