End of an era: Fed takes big step toward normalizing

The Federal Reserve announced Wednesday that it will begin shrinking its balance sheet. This announcement marks a major turning point in its history, for it will lead to a reduction in the Fed’s own profitability and reach if followed through to completion.

It is rare to see a government agency voluntarily agree to such downsizing, but the Fed seems determined to do so for now.

As a result, the Fed resorted to buying up vast quantities of long-term, mortgage-backed and treasury securities as a way to supply additional stimulus to the economy. The idea was that the Fed could push down longer-term interest rates by buying these securities. The lower long-term interest rates, in turn, would stimulate spending and spur a stronger recovery.

This vast expansion, combined with the introduction of the Fed’s program to pay interest on excess reserves (IOER) to banks, effectively transformed the Fed from a standard central bank into one of the most profitable financial firms on the planet.

The Fed has been earning relatively high interest on its expanded holdings of long-term securities, like mortgage-backed bonds and Treasury securities, and paying very low interest on short-term deposits from the banks as part of the IOER program.

Over the past few years, it has averaged near $100 billion in profits. Prior to the crisis, its profits averaged only $25 billion per year. The Fed’s profitability has allowed its budget to grow 4.1 percent per year between 2007 and 2017, compared to 2.4 percent for the federal government.

Given the profitability, prestige and jobs created by maintaining the Fed’s large balance sheet, it will not be painless for the Fed to shrink it. So it is truly remarkable to see the Fed announce it will begin unwinding its portfolio of mortgage-backed and treasury securities.

The Fed’s main reason for doing so is that it believes a large balance sheet is no longer needed for stimulus reasons, since the economy is close to full employment. Another reason is that some Fed officials worry about the footprint its large balance sheet has on the financial system.

By becoming a large financial intermediary, the Fed has effectively usurped activity and profits formerly captured by private financial firms. These Fed officials want to reverse this creeping nationalization of the financial system.

Another reason why the Fed may be eager to unwind its balance sheet is that it is bad optics politically. The large expansion of the Fed’s asset holding accompanies a similar-sized expansion of its liabilities. 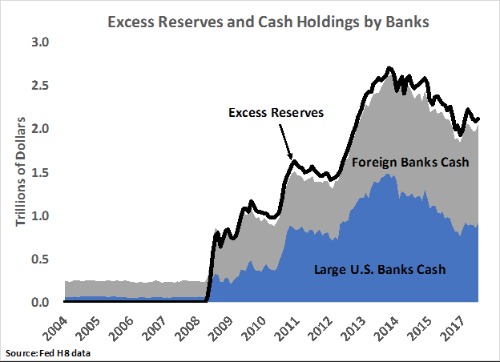 That means foreigners and the U.S. banks bailed out during the crisis are getting most of the interest payments from the Fed. If the Fed’s balance sheet was maintained and short-term interest rates eventually rose to 3 percent (as expected), these banks would get approximately $66 billion a year from the Fed.

If interest rates returned to 5 percent, they would get $110 billion a year. Such large payments to foreign and large U.S. banks would be hard to explain to Congress.

These are the reasons the Fed for now seems determined to shrink its balance sheet. Only time will tell, though, whether they will provide enough incentive for the Fed to completely follow through. For the siren call of profitability, prestige and jobs created by maintaining a large balance sheet may yet prove too tempting for the Fed.

David Beckworth is a senior research fellow with the Mercatus Center at George Mason University’s Program on Monetary Policy and a former international economist at the U.S. Department of the Treasury.

Follow the first rule of strategy: Eject China from the TSP

by Avraham Shama, Opinion Contributor 1 day ago
Finance  /  1 day ago
See All