Well-capitalized Western companies with their know-how and huge scale have an advantage in the trading of products. Eastern Europe, with an educated and ambitious, albeit poorer, workforce, has an advantage in the provisional offering of service labor. These complementary strengths and weaknesses combined in the common market could fuel growth and strengthen the European project.

Harnessing the relative strengths for common good requires mutual adjustment, as all growth does. Several years ago, well-capitalized Western corporations in possession of numerous patents and the latest technology received tariff-free access to Eastern European markets.

Local producers had to restructure, and many closed shop. Eastern Europeans accepted products from Western European producers in our national markets believing that trade is a two-way street.

However, now that Eastern European providers of services have found their footing in the common market (see chart below), Macron wants to make intra-EU trade a one-way street: Eastern Europeans purchase Western Renaults and Volkswagens, but the West will erect trade barriers against Eastern European truck drivers and construction workers.

Petty nationalism of this sort will fan the flames of populism. 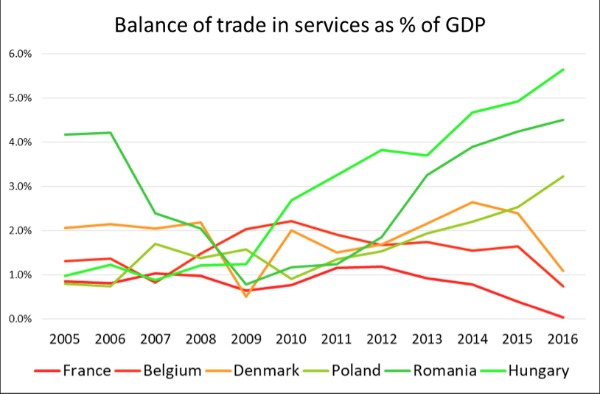 Equal pay for equal work in the same place is incompatible with a common market. Pay differences are a legitimate element of competition among service providers. Significant pay differences exist within national economies and even within the same cities.

When Emmanuel Macron claims that “posted worker rules” are fueling populism, he is partially right. A well-functioning market does cause reallocations of workers and assets to their most productive application.

It is only natural for the workers affected by this process to feel displaced and angry. However, preventing timely restructuring is a leading cause of economic inefficiency and increased restructuring costs later.

Responsible statesmen assuage the pain of economic dislocation without resorting to the palliative of populist “blame-the-foreigner” rhetoric and trade barriers.

Make no mistake, we would be backed into a corner. The folly of paying equal pay for equal work is evident in the rapidly depopulating areas of East Germany. For political reasons, the exchange rate with East Germany was set at above market rates.

This promptly priced a large proportion of East Germans out of their jobs. The fact that Poland stands to suffer disproportionately in a trade war need not stop what would be set in motion.

When facing overwhelming odds, it is often rational to be irrational. Just ask the Germans and the Russians whether our numerous Polish uprisings against their diktats were based on a calculus of immediate costs and benefits.

Europe need not descend into tit-for-tat protectionism. European leaders need not stoke the fire of nationalism. Barriers to trade in services are inefficient and immoral. Mutual adjustments in search of economic efficiency will make the EU strong and prosperous.

The role of national leaders is to revive the promise of the European project and keep petty protectionism at bay. Most importantly, the rules that hold Europe together must apply to all, all the time.

The EU’s common market is founded on four freedoms of movement of: people, products, capital and services. Some in France and Germany want to pick and choose which aspects of the common market will function and which will not. Letting them have their protectionist way will warp the European project and cause it to eventually wither away.

Pawel Dobrowolski is an economist and former investment banker who served as an assistant to Jeffrey Sachs during the first Leszek Balcerowicz government in Poland that implemented the transition from a planned to a market economy. He successfully lobbied for the introduction of public hearings into Poland’s parliamentary procedures and the liberalization of Poland’s consumer bankruptcy protocol. Currently, Dobrowolski is chief economist at the Polish Development Fund.

For Ron DeSantis, what a difference a deluge makes

The end of scarcity: A silent threat to US well-being

A Tale of Two Billionaires: Yvon Chouinard and Warren Buffet

by Sid Mohasseb, opinion contributor 3 days ago
Finance  /  3 days ago
See All