House Republicans recently released H.R.1 referred to as the “Tax Cuts and Jobs Act.” Unfortunately, the only part of the title that is a certainty is the tax cut portion. The jobs part is an uncertainty, merely speculation that jobs will be created.

While supporters of the bill promise it will create more jobs and even higher wages, there are no requirements for companies to increase hiring or raise wages to have their statutory tax rate reduced from 35 percent to 20 percent.  H.R.1 is a tax cut bill with a title that only implies it will create jobs.

As currently written, there is no guarantee that only companies creating jobs and paying higher wages will see a significant reduction in their tax rate. It is the equivalent of selling your house, handing the keys and title to the buyer and hoping they pay you.

Asking Americans to take on an additional $1.5 trillion in debt based solely on supporters promises that it will create more jobs is naïve at best. Americans deserve certainty. They deserve a better return on the proposed $1.5-trillion tax cut investment and it’s called the Earned Corporate Tax Cut or “ECTC.”

The ECTC would base each company’s tax rate on its rate of American job creation, wages and employee-provided health insurance. Companies that don’t increase hiring wouldn’t receive a tax cut and unlike H.R.1, companies that fire Americans certainly wouldn’t get a tax cut.

Determining each company’s tax rate would utilize a corporate tax cut “scorecard.” Congress and D.C. policymakers are used to “scoring.” How much of a tax cut each company would receive under the ECTC would simply involve scoring each company based on the following three factors: 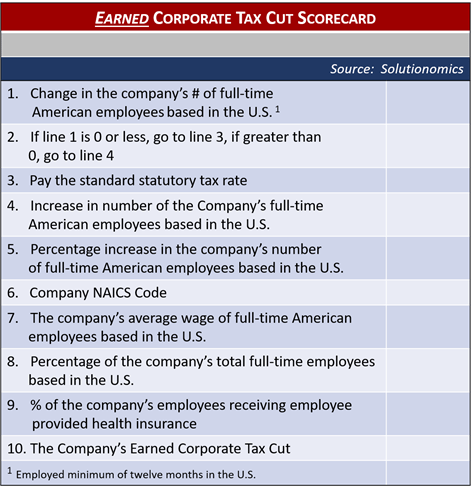 Determining corporate tax rates through this targeted scoring approach would do five things:

All of this would be accomplished while securing the same, and possibly greater, employment and wage growth, as companies would have a real incentive to increase hiring and wages.

Some have argued this “scoring” approach would burden companies. Rather than a burden, it would only be a matter of companies sharing the information they already have. Companies know who they hire and fire, what they pay their employees and which employees receive company-provided health insurance.

Still, others have questioned whether Congress would pass a bill that makes tax cuts contingent on job creation and wages. Think of it this way: If you owned a business and you were told how to increase your return on investment but your management team wouldn’t implement the plan, would you give up on the plan? Of course not. Instead, you might change the management.

Promises of job creation are not enough. Americans deserve a better return on the proposed $1.5 trillion in additional debt they would be subjected to over the next 10 years.  Anything less would be a bad investment, and there is a much more efficient alternative, the Earned Corporate Tax Cut.

Follow the first rule of strategy: Eject China from the TSP

Will the UK’s economic gamble pay off?

by Vivekanand Jayakumar, Opinion Contributor 1 day ago
Finance  /  1 day ago
See All

Biden: Hurricane Ian ‘could be the deadliest’ in Florida’s history