During my most recent trip to Capitol Hill, there was a noticeably different feel in the air. It wasn’t just the ambient air temperature that had changed, there was a chill in the political air as well.

There was a distinct sense of desperation urgency to pass tax reform. House Republicans furiously marked-up H.R.1 and rushed to get it voted out of committee and then to pass it in the House.

{mosads}Meanwhile, the Senate was also giving off a distinct sense of urgency and an air of desperation as it rushed to release something, filling in the details later. Speed, not sage policymaking was clearly the order of the day, and it has continued into this week.

What could create such a sense of urgency and desperation among a legislative body with a 90-percent-plus reelection rate? Donors, big donors. Rep. Chris Collins (R-N.Y.) was quoted as saying, “My donors are basically saying, ‘Get it done or don’t ever call me again.’”

In another highly revealing statement, Sen. Lindsey Graham (R-S.C.) posited that, “The financial contributions will stop.” The threat of big donor defections has congressional Republicans on edge.

Big donors want a return on their investment and like activist investors, they are making their tax wish lists known as well as the political ramifications of not delivering. This has led to highly dysfunctional House and Senate tax bills reflecting big donor demands at the expense of sound policy.

For all the talk of encouraging American jobs and manufacturing, it looks like the House is going to eliminate the domestic production activities deduction. Why? Because of its desperate need to offset tax cuts elsewhere.

Now, some may argue that this is okay because companies will receive a much bigger incentive via reducing the statutory rate from 35 percent to 20 percent. Not necessarily. There is nothing in H.R.1 that ties the reduction to domestic production.

Rather, companies can reduce production in the U.S. and see their tax rate nearly cut in half. That’s not an incentive, that’s policy negligence.

The policy dysfunction doesn’t end there. As currently proposed, both the House and Senate bills could end up subsidizing the purchase of foreign-made robotics. While the idea behind full and immediate expensing of equipment purchases is that companies will invest more in equipment creating American jobs, that may not be the case.

What if the equipment purchased is produced by workers outside the U.S.? In 2016, Japan and Germany alone accounted for more than 50 percent of total industrial robot exports with the U.S. accounting for only 4.3 percent.

The U.S. just isn’t as dominant in robotics as some might think. Nine out of the 10 largest industrial robot manufacturers by industrial sales volume were based outside of the U.S. As currently written, companies would benefit from full and immediate expensing of purchases of foreign produced equipment, with no benefit to American workers. 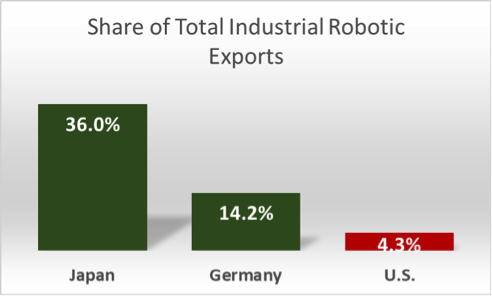 It exempts these profits from today’s current tax rates. Worse still, the tax cut is without conditions. Like the reduction in the statutory corporate tax rate, companies don’t have to create jobs or pay higher wages to benefit from the tax cut. That’s highly inefficient.

According to a Pew Research Center poll, 52 percent of Americans say corporate tax rates should go up while only 24 percent support rate reductions. Yet, approximately two-thirds of the benefits of tax cuts would accrue to corporations.

The latest Senate tax bill is reported to make corporate tax cuts permanent and individual tax cuts temporary. The list goes on and on. What is really going on is that extreme big donor political pressure is leading to extremely inefficient tax policy with a $1.5 trillion price tag.

That is something we cannot afford, and we should at least be getting a better return on our investment.

Chris Macke is the founder of Solutionomics and a contributor to the Federal Reserve Beige Book, which is used to inform Federal Open Market Committee members on changes in the economy since the last meeting.

Ready or not, the supply chain transformation is underway

Congress needs to take its role in inflation seriously

How policies ‘protecting’ small restaurants from delivery apps are backfiring

by Liya Palagashvili, Opinion Contributor 6 days ago
Finance  /  6 days ago
See All