{mosads}Well, it must have been third on the list? Nope. The third most common expected use of proceeds from tax savings on foreign earnings was mergers and acquisitions. Well, that’s okay because we all know that when companies buy other companies they retain all the employees (insert sarcastic tone here.) Capital expenditures finally came in at No. 4, followed by increasing dividends.

Who could have seen that coming? After all, when companies saw after-tax profits increase more than 950 percent from 1986 to 2016, they increased retained earnings more than 1400 percent and increased dividends more than 925 percent. 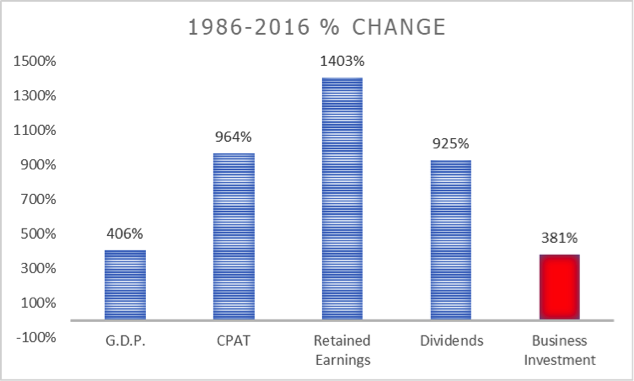 According to the National Economic Council Director Gary Cohn, that wasn’t supposed to happen. From 1986-2016, the effective corporate tax rate declined by nearly half. Gary Cohn would tell us that business investment should have increased far more, as he is promising us today. 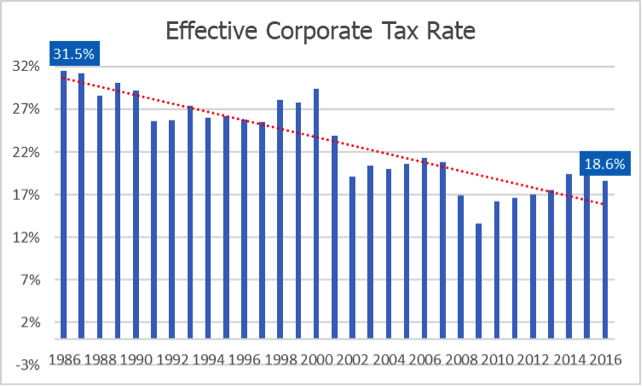 Could it have something to do with the fact that companies were making so much money they literally didn’t know where to invest much of it, so they retained more of their profits and increased their dividends? Think about it: Business investment didn’t even keep up with GDP growth. That’s bad.

If companies today have near-record profits and record retained earnings, why would we expect anything different this time? Why would companies flush with more cash than they have ever had on hand suddenly increase business investment?

While some will increase business investment, if history is a guide, not all will, and many have said as much. Cisco’s CEO told Bloomberg, “We’ll be able to get much more aggressive on the share buyback.”

Small wonder so many companies didn’t have business investment at the top of their list of what they would do with a further increase in after tax corporate profits — they already have more cash than they seem to know what to do with.

Yet, Gary Cohn is convinced companies are going to plow their tax savings on foreign-earned profits into business investment. During a recent Wall Street Journal-sponsored event, the moderator asked attendees whether they would increase business investment if corporate tax rates were cut.

Much to Mr. Cohn’s surprise and dismay, very few hands went up. Cohn even asked, “Why aren’t the other hands up?” Somebody please let him know companies have more money than they know what to do with, at least the large companies. He might be shocked.

The most important insight I hope you take away is this: At least some companies need more customers than they need more cash. They need more investment opportunities, which come from increased customer demand.

Instead of unconditionally cutting the tax rate on foreign-earned profits, tie the reduced rates to increased hiring and wage growth. This would allow for larger consumer tax cuts providing companies with that they need, consumers with more cash to buy more company goods.

In State of the Union address, Biden will highlight his dishonest take on the economy

The states that are falling behind in economic freedom

What happens when fewer companies control the entire rail industry?

Despite political turmoil, Vietnam is worth the risk of doing business

by Ted Osius, opinion contributor 4 days ago
Finance  /  4 days ago
See All