Bitcoin is a Ponzi scheme, and it will collapse like one

At its root, bitcoin is a Ponzi scheme — it will stay afloat only as long as enough people buy the fiction that bitcoin represents real value. All other cyber currencies are Ponzi schemes, too, except, arguably, initial coin offerings (ICOs) funding actual business start-ups.

Ponzi schemes promise investors returns above what real investments yield, but the Ponzi scheme operator does little, if any, actual investing. Instead, cash from new investors is paid to earlier investors to maintain the illusion that the scheme is earning real profits.

All Ponzi schemes eventually collapse, of course, when sufficient amounts can no longer be raised from new investors to pay off earlier investors.

That downward spiral will accelerate as cyber-currency “investors” try to bail out before prices plunge even more.  As one sports-radio commentator I heard recently sagely observed, cyber currencies are “imaginary money.”  That reality will become readily evident as cyber currencies’ prices approach zero.

This overdue disaster will occur because all cyber currencies, except possibly some ICOs, have no intrinsic value.  As I explained on Dec. 4 in a piece for The Hill, cyber-currencies, except ICOs, lack any substance — there is no “there” there.

The solid line in the chart below shows bitcoin’s price decline in recent days after a quadrupling of its price over the last three months (the solid line), as well as its extreme daily price volatility (the dashed line.) That volatility makes it impractical to use bitcoin when buying or selling goods and services. 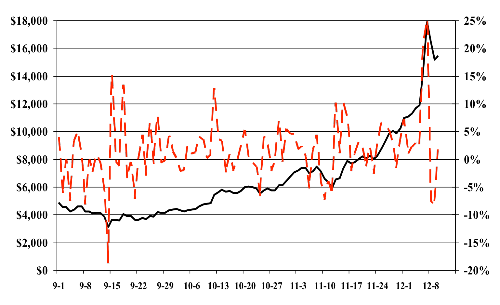 A key driver of bitcoin’s price volatility and consequence instability is the high level of bitcoin buying and selling, or turnover.  Sellers are trying to lock-in a gain, or minimize a loss, while buyers are gambling that bitcoin still has some price appreciation potential.

The solid line in the chart below illustrates bitcoin’s daily turnover, expressed as a percentage of the total market value of all bitcoins outstanding at the end of the day.  Recently, over 5 percent of all bitcoins have been changing hands on a daily basis. 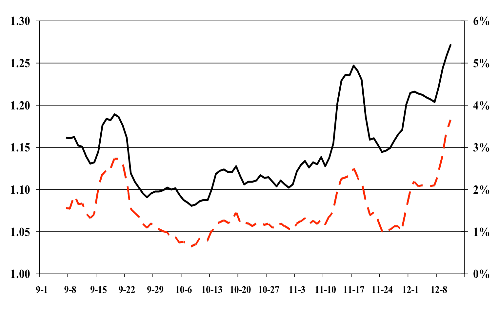 That turnover correlates with the significant intraday fluctuation in bitcoin prices — the ratio of bitcoin’s daily high price to its daily low price, as shown by the dashed line above.

The high turnover rate is powerful evidence that many bitcoin investors are seeking short-term gains rather than making a long-term investment. Consequently, a sudden, panic-driven influx of sell orders or a pullback by buyers suddenly unwilling to gamble on a steadily rising bitcoin price will sink that price.

Since nothing of substance, except the number of coins outstanding, differentiates one cyber currency from another, a flood of bitcoin sell orders could quickly become contagious, driving down all cyber currency prices, as prospective buyers hold back, waiting for prices to go even lower.

Such an event would be comparable to a flock of investors in a Ponzi scheme suddenly demanding their money back. Once redemptions exceed fresh investments, the scheme collapses.

Some see Sunday’s launch of a futures market for cyber currencies as giving investors a tool for protecting themselves against losses, but I am skeptical about that promise ever being fulfilled.

Monday’s significant jump in bitcoin’s price should not give anyone confidence that its price has bottomed out. That increase is solely attributable to the launch of the bitcoin futures contract.

Cyber-currency futures will stumble, though, given the impossibility of forecasting with any degree of confidence the future price of bitcoin, much less any cyber currency, with the possible exception of ICOs funding real businesses.

RELATED STORIES FROM THE HILL

These futures contracts will not provide much of a safety net for cyber-currency investors. Consequently, bitcoin and its ilk will collapse, just as earlier speculative bubbles did, going back to the plunge of tulip prices in 1637.

The inability of cyber currencies to serve as a store of value and to efficiently function as a medium of exchange for buying and selling real goods and services will become increasingly evident. Once that fiction is revealed, the game will be over for cyber currencies, just as it was for the Wizard of Oz when Toto pulled back the curtain.

The collapse in the market value of bitcoin and the other cyber currencies will generate substantial controversy — how could so many people have been so wrong about their value?

That questioning will lead to the inevitable political backlash as recent investors in cyber currencies tally up their losses — in the aggregate hundreds of billions of dollars.

While the forthcoming bitcoin bust will not end well for cyber currencies lacking any intrinsic value, from that wreckage will emerge sounder means for executing a variety of financial transactions, based on blockchain technology, that transfer the ownership of assets with real value.

Meanwhile bitcoin and the like will quickly fade into financial history, just as tulipmania did, serving solely to remind future generations of the folly of gambling on illusions of value.

Bert Ely is the principal of Ely & Company, Inc., where he monitors conditions in the banking and thrift industries, monetary policy, the payments system and the growing federalization of credit risk.

by Will Marshall, Opinion Contributor 4 days ago
Opinion  /  4 days ago
Finance

by Olivia A. Golden, opinion contributor 5 days ago
Finance  /  5 days ago
See All