We warned Americans in a Dec. 7 piece in The Hill that the tax bill being considered and eventually passed by Congress and signed by President Trump would allow companies to fire Americans and receive massive tax cuts. Now it is happening.

Walmart announced that it would fire an estimated 9,450 employees as it closed 63 Sam’s Club stores. Remember the Indiana-based heating and air conditioning company, Carrier Corporation, that received $7 million in incentives last year? It announced 215 firings.

{mosads}Surely this will impact the tax cuts they receive under the recently passed tax bill. After all, we were promised that the reduction of the corporate tax rate from 35 percent to 21 percent was about job creation. Nope.

Walmart will still see its effective tax rate reduced from its 11-year average of 32.4 percent to the new 21-percent statutory tax rate for an estimated $2.5 billion in tax savings, maybe more depending on other tax breaks it can claim.

The parent company of Carrier Corporation, United Technologies, will see its 11-year average effective tax rate reduced from 27.2 percent to the new 21-percent statutory tax rate for an estimated $455 million in tax savings, maybe more depending on other tax breaks it can claim.

Under the recently passed tax bill, companies can fire Americans and receive a massive tax cut. There is no requirement for companies to hire Americans to receive a lower tax rate. Why did Congress pass such an irresponsible bill?

More than one Republican lawmaker admitted he was going to pass this bill because if he didn’t, his donors would stop writing checks. That may be a good way to stay in office, but it certainly is not a good way to make policy.

While it is true that Walmart is giving employee bonuses and raising its minimum wage, we estimate that the bonuses paid, which average $190 per employee, represent roughly 16 percent of Walmart’s estimated annual tax savings. 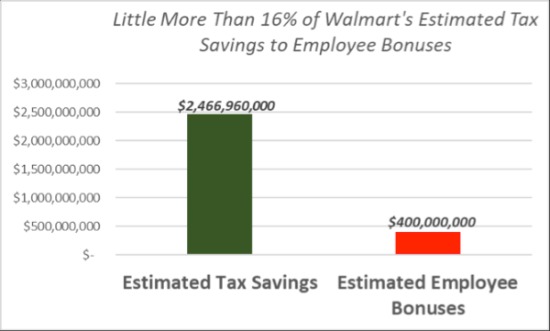 Walmart is increasing its minimum wage to $11 per hour. While that is a positive, consider this: According to Payscale.com, Costo’s average hourly pay ranges from a low of $10.87 to $25.12 an hour. Walmart raised its minimum wage out of necessity, not because its received a massive tax cut.

That would be the ideal time to make one simple but powerful change to the tax bill: Replace the unconditional tax rate reduction with a merit-based tax reduction. Companies that increasing hiring in America would see a tax rate reduction, while companies firing Americans wouldn’t.

In addition, when companies like Walmart increase their wages, they would get credit for that too, seeing a reduction in their lower tax rate. Companies already track who they are hiring and firing, know what they are paying their employees and know where their employees are located.

Implementation of these solutions would only need companies to share the information they already have. This approach would create real incentives for job creation and wage increases and ensure that the American taxpayer isn’t giving massive tax cuts to companies firing Americans. Anything less would be irresponsible.

Chris Macke is the founder of Solutionomics, a think tank focused on developing solutions for a more efficient, merit-based corporate tax code. He has advised the U.S. Federal Reserve by providing market updates and implications of monetary policy changes on asset valuations and market distortions, and he’s a contributor to the Fed Beige Book.

In the rush to end globalization, we’re missing critical points

As the Federal Reserve prepares for another interest rate hike, volatility lies ahead

To reverse our discontent, America needs a national infrastructure bank

by Ryan Donovan, opinion contributor 2 days ago
Finance  /  2 days ago
See All

DeSantis responds to Trump attacks by pointing to his reelection

Santos steps down from committee assignments