President Trump promptly tweeted, “Great to see Apple follow through as a result of TAX CUTS.” Is Apple hiring 20,000 people, paying $2,500 in stock bonuses and investing $30 billion in U.S. facilities as a result of the tax cuts as the president claimed?

Here is what Tim Cook said when pressed on the question: “There’s large parts of this that are results of the tax reform, and there are large parts we would have done in any situation.”

{mosads}While large parts are not a result of the tax bill, for purposes of this analysis, we are going to assume that they are entirely due to the tax cuts, so there are no disputes with the following analysis due to not fully attributing the announced jobs, bonuses and investments to tax cuts.

The vast majority — $48 billion — of the cuts will come in the form of tax savings on its cash held overseas, while $2.3 billion will be in taxes on its domestic annual profits. That is the taxpayer’s investment.

On the taxpayer return side, we assume that all the announced jobs, bonuses and promised investment are due to the tax cuts. Looking first at the 20,000 announced jobs, we see that $50 billion in return for 20,000 jobs came at a cost to the American taxpayer of more than $2.4 million per job.

For comparison purposes, Toyota-Mazda recently announced that they would build a plant in Alabama creating 4,000 jobs in return for $350 million in incentives received from Alabama, equating to a cost of $87,500 per job. It seems Alabama taxpayers got a much better deal.

Moving on to the $2,500 bonuses, while they equate to more than $300 million in total bonuses, they are equal to less than 14 percent of Apple’s estimated annual domestic tax savings of nearly $2.3 billion. 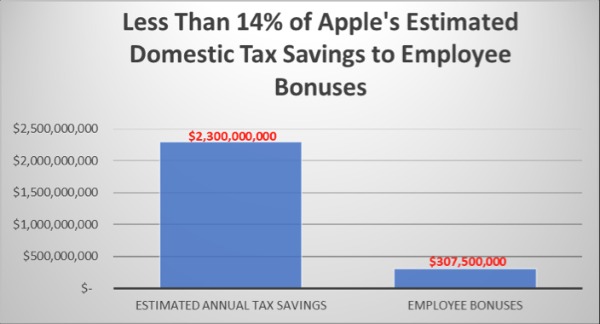 Apple also announced $30 billion in investments in U.S. facilities over the next five years. While that is a lot of money, how does it compare to the money Apple will be bringing back from overseas at a significantly discounted tax rate?

Last, this analysis assumes that Apple doesn’t shift future profits and operations overseas to take advantage of the fact that under the recently passed tax bill, companies will effectively pay no tax on profits earned overeas.

While they are attention-getting numbers, it turns out that Apple’s job announcements, bonuses and promised U.S. investment are not as great of a return on the American taxpayer’s estimated $50 billion investment in tax savings as they might first seem.

This naturally leads us to the following question: Couldn’t Congress have gotten a better deal for the U.S. taxpayer? Unfortunately, under the current campaign finance system dominated by big-ticket donors, the answer is no.

It turns out that the recent “tax reform” passed by the Congress and signed by President Trump as much as anything else makes the case for the reform we needed first: campaign finance reform.

Maybe a future Congress will surprise us and work as diligently on passing campaign finance reform as this Congress and the president did on passing the recently passed tax bill.

Financial inclusion for the ‘unbanked’ could ease US economic woes

The Federal Reserve is the rest of the world’s problem

The data is in: Poverty is a political choice

by Karen Dolan, opinion contributor 6 days ago
Finance  /  6 days ago
See All

US military points to Ukraine in warning China against Taiwan attack