Wage growth well short of what was promised from tax reform

Assuming a full 52 weeks of work, the $6.21 increase in weekly earnings would result in a $323 annual increase, nowhere near the minimum $4,000 promised and $9,000 potential annual increases projected by President Trump and Speaker Ryan if significant cuts were made to corporate tax rates.

Unless something drastically changes, it seems that Americans are going to have to settle for much less than the $4,000 to $9,000 projected wage increases. An extra $322 a year isn’t going to do much to pay down the $1 trillion in additional debt they are projected to take on as a result of the tax cuts.

Yet, a key part of the argument for the recently passed corporate tax cuts and more than a trillion dollars in debt was the substantial wage hike promised by the president’s Council of Economic Advisers (CEA).

From a document titled, “Corporate Tax Reform and Wages: Theory and Evidence,” on the White House’s website:

“Reducing the statutory federal corporate tax rate from 35 to 20 percent would, the analysis below suggests, increase average household income in the United States by, very conservatively, $4,000 annually.”

The document goes on to say:

“When we use the more optimistic estimates from the literature, wage boosts are over $9,000 for the average U.S. household.”

No less than Speaker Ryan’s website trumpeted the Council of Economic Advisers report claiming that on average, the proposed corporate tax cuts would result in at least a $4,000 annual increase in wages.

Now, some supporters of the tax bill may say this analysis is unfair because it is too early for the effects of the tax bill to show up in wages. By that logic, they also shouldn’t take credit for reported employment growth increases.

Still others may point to the $1,000 bonuses announced by some companies shortly after passage of the tax bill. First, that is significantly less than the promised $4,000 to $9,000. Second, these are not wage increases; these are one-time bonuses.

Will companies pay them again, and if so when? Third, the $1,000 represents a fraction of the estimated potential company tax savings.

Using 2016 net income, 2016 effective tax rates, the new 21-percent corporate tax rate and company bonuses, we estimated company bonuses as a percentage of a number of company’s potential tax savings. The results: In many cases, the bonuses represent a mere pittance of the possible tax savings.

Navient announced that it would be giving $1,000 bonuses to 98 percent of its 6,7000 employees, paying out nearly $7 million in bonuses. While that may seem generous, it pales in comparison to Navient’s potential tax savings. 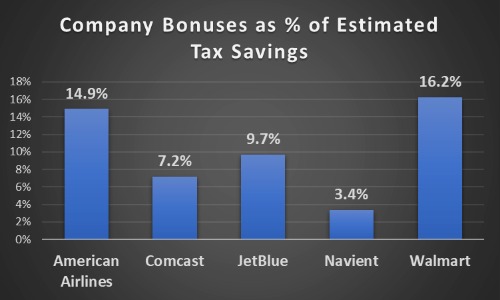 What happened to the minimum $4,000 promised? I guess like many promises by politicians, they were empty. Instead, they seem to have gone to share buybacks. For the period December 2017 through February 2018, share buybacks more than doubled to $200 million.

Is a $323 wage increase and a one-time bonus of $1,000 that represents a fraction of estimated potential company tax savings worth the more than $1 trillion in additional debt placed on Americans? Is this the best Congress could do? No.

Instead, Congress could have simply made each company’s tax cut contingent on each company increasing wages. The problem is that some companies receiving tax cuts didn’t raise wages.

If Congress had made each company’s tax cut contingent on each company’s wage increases, the American people would have gotten more bang for their tax cut bucks. Additionally, this would have created a real incentive for companies to raise wages: Increase wages, get a tax cut; don’t and you won’t.

Chris Macke is the founder of Solutionomics, a think tank focused on developing solutions for a more efficient, merit-based corporate tax code. He has advised the U.S. Federal Reserve by providing market updates and implications of monetary policy changes on asset valuations and market distortions, and he’s a contributor to the Fed Beige Book. Find him on Twitter: @solutionomics.

Nonprofits need a seat at the governing table

by Stacey D. Stewart and Phoebe Boyer, Opinion Contributors 1 day ago
Finance  /  1 day ago
See All