In 1908, Henry Ford introduced the Model T. The Model T led to the transformation of the United States: Automobile ownership was no longer confined to the rich but could now be enjoyed by the common citizen.

{mosads}During the early 20th century, the world was very different. The River Rouge complex was built as a result of the difficulties inherent in conducting activities further from home.

Seaborne transportation was difficult and costly, communications rudimentary and slow, coordination costs of managing disparate locations large and the ability to work in far-flung places difficult at best.

Fast forward to the present era. In the post-industrial era, many of the challenges of conducting activities abroad have all but disappeared. Containerized shipping (An American invention) completely revolutionized and reduced the cost of seaborne transportation.

As air travel became cheaper, it was easier to send managers to distant parts of the globe. Coordination costs came down with better forms of communication. The mid-90s introduction of the internet accelerated the speed of communications and dramatically lowered the cost of informational transfer.

In the words of Thomas Friedman, the world had become “flat.” The frictions that hindered global trade suddenly disappeared, and the movement of things, people and capital transformed the system of global trade enabling countries large and small to take advantage of the laws of comparative advantage and trade with other nations with great efficiency and speed.

President Trump is fond of reminding America of the $300 billion-plus trade surplus that China is running with the United States. In citing this figure, Trump reminds Americans that they are being “ripped off” by the Chinese and that the U.S. has already lost the trade war.

The export trade surplus that China runs with the United States is both misleading and inaccurate. In fact, the method that is used to record such figures is as antiquated at the Model T.

To unpack this, allow me to cite an example of a product that is known to all Americans, the Apple iPhone. In 2009, a study was conducted to decompose the cost of producing an iPhone in China. The following is a breakdown of the iPhone production costs: 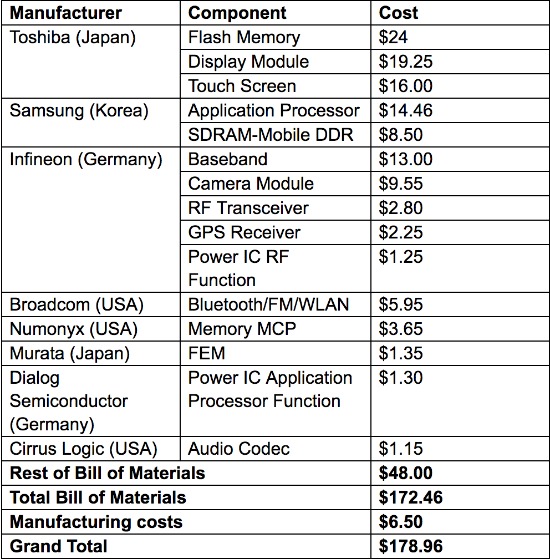 As illustrated in this study, the majority of parts incorporated into the iPhone are manufactured by companies outside of China, shipped to China, assembled by Chinese workers and then shipped out of China to foreign markets such as the United States.

Chinese labor is but a small fraction of the finished product. Nevertheless, China gets credited for the total value of all the parts that wind up in the finished iPhone.

As you can see from the accounting, China’s export trade figure is thus inflated by the parts that originated from other countries, and those countries that supplied such parts are actually understating their export trade activity with the United States.

In a sense, China serves as a conduit of South Korea’s and Japan’s exports and in so doing inflates its own export trade figure with the United States. The iPhone serves as an example of the distortions captured by export trade figures and how such measures can be misleading given the complexity of global supply chains.

Economists have recommended that trade figures should be calculated on the basis of “value added” rather than just the nominal figures represented in trade balance accounting.

If such a value-added system of measurement were to be adopted, it has been estimated that China’s trade surplus with the United States would shrink from one-third to one-half the amount actually reported.

While the above-cited analysis is a bit dated, the majority and most expensive parts going into an iPhone today still come from countries outside of China.

Another contradiction in this trade debate resides in the accounting for national wealth. Credit Suisse compiles an annual study of national wealth across various nations. The study undertakes an analysis of the amount of private wealth accumulation in the respective regions and countries.

Moreover, the growth in national wealth in the United States is growing at a rate that is faster than that of China. So if trade were so bad for the U.S., how is it that the United States has gotten richer over this extended period of global trade?

Given the contradictions described above, it is understandable that financial markets are unnerved over the ongoing trade debate between the U.S. and China. It is unfortunate that the accounting system for global trade is based on a methodology as antiquated as the Model T.

What we need is a new system of measurement that takes into account the value added, replacing nominal values with ratio values to get a true understanding of the relative imbalances in the global trading system.

Arthur Dong is a professor at Georgetown University’s McDonough School of Business. He specializes in legal and business engagements between China and the United States.

Clouds gather over the world economy

Do Democrats see us as a nation of tax cheats?