Some in Congress are pushing for what they are calling “Tax Reform 2.0.” Americans should reply with a loud and clear “Two-point no!”

Tax Reform 2.0 would be add insult to injury, piling even more debt on Americans while the impact on wage growth of the already passed tax reform is falling well short of the promises made.

{mosads}Current tax policy has no connection between each company’s tax rate and its rate of wage growth. This would be a wiser tax policy. It’s common sense: The more a company increased its wages, the lower its tax rates would be.

Part of the sales pitch for Tax Reform 2.0 will undoubtedly be a claim that wage growth skyrocketed after and because of passage of the original tax reform. After listening to the 2.0 sales pitch, Americans may feel like breaking out the bubbly and buying a new car or house.

But just how much in extra wages will they have to put toward that next big purchase? To hear President Trump touting the wage growth reported in the most recent employment report, you would think it was a king’s ransom. It turns out that the actual gain was just 10 cents per hour from July to August.

Inflation-adjusted wage growth is even worse. It is insulting to pretend that the difference in wage growth before and after the recently passed tax bill is anything other than disappointing and much less than what was promised.

During the seven months after the passage of the tax bill, from the end of 2017 to July 2018, inflation-adjusted wage growth was practically zero, averaging 0.2 percent per month.

While that is a staggeringly low number, it looks even worse when one considers that inflation-adjusted wage growth for the seven months prior to passage of the tax bill was 0.6 percent.

Contrary to what was promised, inflation-adjusted wage growth went down after passage of the tax bill, not up. What happened? 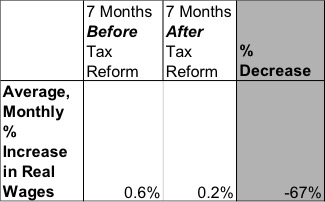 The campaign to gain support for tax cuts required outlandish promises, including wage gains ranging from $4,000-$9,000. There was no way that was going to happen. The current average hourly wage of $27.16 equates to $54,320 per year. The minimum $4,000 promised would have required a 7.6-percent increase in pay.

Even if you count the recently announced $1,000 bonuses some received, that is nowhere near the minimum $4,000 promised. And to receive the $9,000 increase that the White House said was a possibility, that would require a more than 16-percent pay increase.

While a $4,000 to $9,000 wage increase was never realistic, why did inflation-adjusted wage growth decline rather than increase after passage of the tax bill?

Wages are determined by leverage between employers and employees, not tax cuts. Significant increases in corporate after-tax profits won’t increase wages if employers have all the negotiating power.

If you doubt this, consider that after-tax corporate profits ballooned after passage of the tax bill, yet wage growth barely moved relative to wage growth prior to its passage. Why? Because wage growth is a function of both what companies can pay and what they must pay.

As we are seeing right now, that is not the case. No matter how much a company’s profits increase, it won’t have to increase wages when it has the leverage. In the end, rising corporate profits without rising employee negotiating power will not raise the pace of wage growth.

While the promised $4,000-$9,000 wage increases sounded good and people wanted it to be true, reality often differs from the promises of politicians.

Ultimately, Tax Reform 2.0 will be too good to be true as well.

Chris Macke is the founder of Solutionomics, a think tank focused on developing solutions for a more efficient, merit-based corporate tax code. He has advised the U.S. Federal Reserve by providing market updates and implications of monetary policy changes on asset valuations and market distortions, and he’s a contributor to the Fed Beige Book. Find him on Twitter: @solutionomics.

by Will Marshall, Opinion Contributor 3 days ago
Opinion  /  3 days ago
Finance

by Olivia A. Golden, opinion contributor 4 days ago
Finance  /  4 days ago
See All

Trump says temperature ‘has to be brought down’ after FBI search, then repeats attacks