The Earned Income Tax Credit (EITC) is a refundable tax credit that provides income support to the working poor and encourages participation in the labor market. It enjoys broad support across the partisan divide, which makes it a rare breed in today’s political landscape.

But it comes with limitations. Importantly, it does not provide any benefits to those without earnings. Now to be sure, the “hump-shaped” benefit profile in the graph below is there for a reason — to encourage work. But this comes with an important cost: Those who may be the most in need of help receive none of the benefits.

{mosads}Under my proposal, which I call the “Earned and Basic Income Tax Credit” (EBITC), everyone gets something when it comes to those with limited means. This includes families who currently have no earnings.

Unsurprisingly, these families are some of the poorest in our society, making EBITC particularly well targeted to those at very bottom of the income distribution.

So how would this policy work? The basic structure of my proposed plan is simple. It starts with the current structure of the EITC and retains much of it, including the “plateau” and the “phase out” ranges. But it modifies the “phase in” range.

Here’s an example. For a single mother with one child, the maximum benefit level in 2017 was around $3,400. But a single mother who had no earnings did not receive any EITC benefits. Under my plan, she would still receive $1,700.

The same is true for other family structures. For example, a family of four with two children would receive a benefit of $2,800 even if they had no earnings. The additional money spent as part of EBITC would help alleviate extreme poverty.

I estimate that around 35 percent of these additional dollars would go to those who are in extreme poverty (less than half the federal poverty guideline). In contrast, only around 20 percent of current EITC dollars go to the extremely poor.

So how much would this expansion of EITC cost taxpayers? Based on preliminary calculations, I estimate that it would add around $30-40 billion annually to the federal budget, which is roughly a 50-percent increase above current EITC expenditures.

While these budgetary costs may seem sizable, it’s important to put them in perspective. For example, they are substantially smaller than some existing proposals to expand EITC, let alone any proposal to implement a universal basic income (UBI). 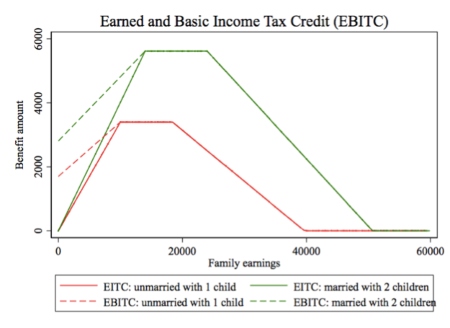 And for comparison, the 2018 tax cuts recently passed in the House would cost around $400 billion annually, dwarfing the proposed tax credits. But most importantly, we also need to consider the benefits: We can expect significant improvements in economic wellbeing arising from such targeted investment.

High-quality evidence suggests additional income to those at the very bottom come with a wide array of benefits, from better health to better performance in schools.

Now some would argue that the EITC benefits going only to those who work is a feature, not a bug. This hump-shaped phase-in feature of the EITC is to encourage people to enter the workforce.

At the same time, from economic theory alone it is difficult to rationalize why an optimal tax credit would give nothing to a family with no earnings even when they are destitute. This stands in stark contrast to policies that would actually give some type of a basic income to the poorest among us.

For example, the “negative income tax” (NIT) proposed by the conservative economist Milton Friedman would have provided the biggest transfer to those with no other sources of income.

This is important because the NIT was influential in shaping thinking about the EITC prior to its original adoption by President Richard Nixon in early 1970s.

Moreover, there is a hidden cost of EITC that is sometimes overlooked: By encouraging more people to work, EITC tends to push down wages at the bottom of the labor market. This may be particularly worrying if employers have substantial monopoly power in the low-wage labor market, which looks increasingly likely.

The proposed EBITC policy strikes a balance between the NIT (or other policies like UBI) and the classic EITC. It continues to reward work, which may be important in providing incentives or in terms of according legitimacy to the program in voters’ eyes.

At the same time, it would introduce a basic income component into our existing tax code without any dramatic overhaul. In addition, by increasing the income individuals can get even without working, it may modestly strengthen workers’ bargaining position, potentially counteracting some of the wage losses arising from EITC.

In this way, it can work together with other policies to boost pay — like higher minimum wage or wage boards.

The EITC is one of the most important anti-poverty tools we have in the U.S. today. Together with the minimum wage, it has provided much needed income to the working poor at a time of growing inequality and wage stagnation.

Let’s make it even better by expanding it to include those who are left out of the workforce while continuing to reward work.

Arindrajit Dube is professor of economics at the University of Massachusetts Amherst. He has conducted extensive research on competitiveness in the labor market and the impact of public policies affecting low wage workers. Visit his website: www.arindube.com or follow him on Twitter: @arindube.

Markets give thumbs down to the Fed

Trump’s pick for head of IDB fired; we need a consensus replacement

Why is fiscal responsibility not discussed anymore?

by Michael D. Farren, Opinion Contributor 1 day ago
Finance  /  1 day ago
See All

Why Hurricane Ian poses a unique threat to Tampa Bay