Trade wars are not the way to Midwestern voters’ hearts

According to conventional wisdom, voters in the Midwest support protectionist trade policies, even if it hurts their own pocketbooks. President Trump’s doubling down on protectionist measures appears to reflect a belief that voters appreciate giving countries a good punch in the nose, even if it is not in the voters’ economic self-interest.

But across the Midwest, the public perception and attitudes toward trade are more nuanced — and generally positive.

Better-educated voters, along with managers and workers in the many Midwest businesses and commodity producers (small and large) that are in the business of exporting, (or importing parts of their own products) don’t appreciate the economic wrench thrown in their livelihoods by tariffs and trade wars.

The 2020 election could be affected by how Midwest swing-state voters think about trade.

From a straight economic and pocketbook argument, there is good evidence that international trade is a key component of the economic health of communities in the battleground states of the Midwest.

Midwest trade is certainly critical to the almost 200 globally engaged Fortune 500 businesses hubbed in the region, but access to export markets is also critical to the region’s small businesses and producers, which, according to the U.S. Small Business Administration, make up 98 percent of all exporters.

A U.S. international Trade Commission study showed a wage premium for workers in export-intensive industries of 16.3 percent for goods (19 percent for blue-collar workers) and 15.8 percent for services.

So it is a boon for their workers that Pennsylvania, Ohio, Michigan and Illinois are among the top 10 states for exporting, with Indiana at No. 11.

The Midwest has many small and medium-sized cities that depend on global markets and exports. These communities are “winning” in today’s global economy.

For example, 17 percent of Midwestern counties are home to high-level of exports relative to other counties in the region, but that small group makes up more than half of the Midwest counties that earn higher-than-average incomes in the region.

And as we’ve seen and written about elsewhere, growing community incomes are key to resident optimism and provide a counter to a kind of economic nostalgia, nationalism and nativism.

Midwest communities are also among the most sensitive to interruptions in trade and related dislocations if the healthy advance of more open trading regimes is unwound (as recent tariffs and trade war talk threaten to do).

Ensuring that markets remain open to U.S. goods and services for all businesses is an important part of keeping jobs in the Midwest.

The region particularly depends on export markets in Canada and Mexico — markets at a critical juncture now that Trump has threatened to impose tariffs on Mexico that could upend the U.S.-Mexico-Canada Agreement, which is up for ratification. 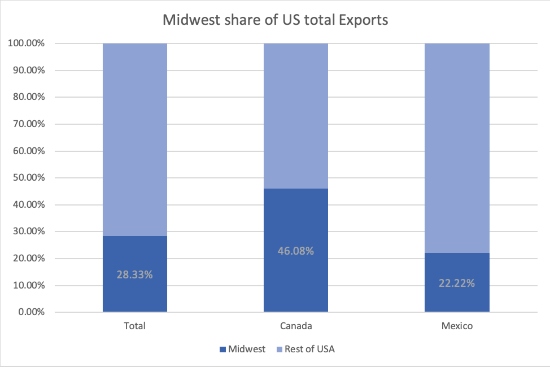 These “export” numbers are a bit deceptive. We don’t “trade” so much with our neighbors as we make things together. The classic image of trade as one country “selling” something to another doesn’t describe economic reality — particularly in the Midwest.

Jobs and incomes here are intertwined in highly interdependent supply and production chains across national borders that go into making everything from food to manufactured goods, and even service-sourcing networks.

Much North American trade (more than half) occurs in intermediate goods, materials or components that companies import and integrate into the production of a final good.

In the swing states of the Midwest, our jobs and the economic vitality of our communities depend on fair and open trade both ways; public perception of the virtues of trade is predominantly positive.

There is strong evidence that a majority of the region’s residents, while perceived as being opposed to global trade and sensitive to economic dislocations caused by trade, appreciate the positive benefits from trade for their communities and their pocketbooks.

Recent surveys by the Chicago Council on Global Affairs, as well as media organizations, confirm that, on-balance, the region’s residents believe trade benefits their communities, and the tariff and trade wars hurt their economic prospects.

Listening sessions and focus groups conducted by the nonpartisan group, Listening for America, found strong support for trade policies that provide continued opportunity to grow exports throughout the Midwest, as well as an understanding that imports are an important part of the fabric of everyday life.

Midwestern small businesses, in particular, have expressed concern about continued access to affordable inputs as crucial for their competitiveness and in many cases, ultimate survival.

The 2017 Chicago Council survey found evidence that fiercely anti-trade rhetoric (stoked by the 2016 presidential campaign) resonates for some and is (understandably) highest among those working in occupations that did not demand high levels of postsecondary education, occupations most at-risk of dislocation from any source, including trade.

Although numerous studies demonstrate that automation is as responsible for manufacturing job losses as competition from trade, the Chicago Council’s surveys find a majority of Americans (56 percent) still believe international trade is the greater culprit.

Midwesterners are generally in sync with national attitudes on this question, with 57 percent of all Midwesterners believing trade is the chief reason for manufacturing job losses.

That said, a majority of Midwesterners favor agreements to lower international trade barriers, provided they are tied with assistance to transition workers who lose their jobs due to the pressures of trade and globalization.

Politicians interested in appealing to Midwestern voters should be aware of the larger number of Midwesterners who appreciate the economic benefits of a fair, open (and stable) trading regime that includes more aggressive attention to aid the dislocated.

John Austin directs the Michigan Economic Center and is a nonresident senior fellow with the Chicago Council on Global Affairs, Brookings Institution and .W.E. Upjohn Institute. Catherine Novelli is president of Listening for America, and former under secretary of State under President Obama.

What happens when fewer companies control the entire rail industry?

Despite political turmoil, Vietnam is worth the risk of doing business

Social Security can be fixed — here’s how

by Gene Marks, Opinion Contributor 2 days ago
Finance  /  2 days ago
See All