Can we ‘go home again’ after a trade war?

Recently, President Donald Trump offered some recognition that his trade war with China is imposing real costs on American consumers. His concerns have to do with farmers and others whose livelihoods are put at risk by loss of Chinese markets for their goods or services, as well as for ordinary Americans who are beginning to see higher prices on tariff-laden goods in stores and supermarkets.

This is encouraging — trade wars tend to have more losers than winners — but to at least some extent, the die has been cast. And it’s not quite so simple as returning to our corners and getting back to business as usual.

Coincidentally, Mr. Trump’s acknowledgement arrived shortly after American Enterprise Institute economist Mark Perry updated one of his most powerful charts on the U.S. economy’s performance. It shows price increases for major categories of goods and services from June 1998 through June 2019 — set beside the average hourly wages Americans use to pay for them — and only implicitly reflects the forces of international trade. But, indeed, the effects of domestic and international competition are buried in the data. 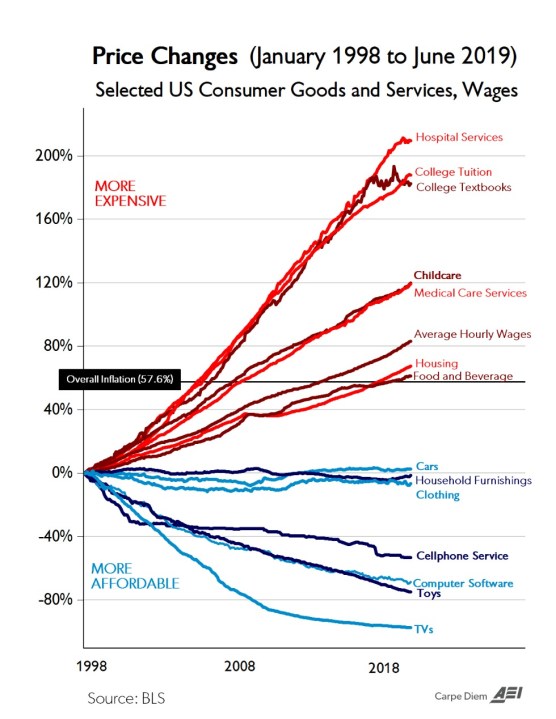 Looking at Perry’s chart, I call attention to the items that experienced the greatest cost increases. Hospital services are at the top of the chart, followed by college tuition and textbooks. Next, we see childcare and medical services. In all five cases, international competition hardly matters, though heavy regulation does make domestic competition somewhat weaker in these five cases.

By comparison, we see no overall price increases across the 21-year period for clothing, household furnishings, and new cars. None. Both international and domestic competition are heavy for these consumer goods.

Looking further, one can see a sharp decline in prices for TVs, toys, computer software, and cellphone services (which reflects the cost of cellphones themselves). International competition is severe for this last group of consumer items. This is no coincidence, of course: Competition leads to lower prices for consumers and, over the long term, a higher quality of life for most people.

But while Mr. Trump has publicly accepted the fact that trade wars can punish consumers, he also believes that the short-run cost will be offset by future benefits that spring from improved Chinese policies. To lock down those future gains, the markets for these goods must more or less recover and return to their pre-trade war positions once the China situation comes to a close.

Put another way, U.S. firms that previously had Chinese customers must once again be able to ship their goods across the Pacific and find at least as many willing buyers. Similarly, Chinese businesses that were shipping goods to America before the trade disturbances must be able to recover fully their U.S. customer base — which, again, benefits U.S. customers, too.

Will this happen? Not necessarily.

Suggesting that it’s a given overlooks the fact that some Vietnamese firms are already taking the place of Chinese businesses, that Brazilian farmers are supplying the soybeans once shipped by Americans, and that former Chinese buyers of American goods have found Chinese or other international suppliers. As Thomas Wolfe put it, “You can’t go home again.” The pre-war home no longer exists exactly as it was.

At the same time that these competitive adjustments are occurring, the Trump administration is expanding its China tariff coverage to cover more consumer goods, including electronics, and also making noise about potential tariffs on French wine and European automobiles. These new tariffs could just as easily distort long-established trade relationships that, once lost, cannot be reshaped overnight.

Mr. Trump’s continued preference for using tariffs in the hope of getting his way with other countries is imposing costs in the short run. As for the long-run, we’ll eventually learn whether distorting trade relationships was worth it.

Bruce Yandle is a distinguished adjunct fellow with the Mercatus Center at George Mason University and dean emeritus of the Clemson College of Business and Behavioral Sciences.

by Will Marshall, Opinion Contributor 1 day ago
Opinion  /  1 day ago
Finance

Mohamed El-Erian: The better news on inflation must be sustained

by Mohamed A. El-Erian, opinion contributor 2 days ago
Finance  /  2 days ago
See All