Wall can’t be the only answer: Uncontrolled, illegal immigration isn’t just at the Southern border

Do we really need a wall on the Mexican border? It would improve security at that border, but there is another, apparently larger source of uncontrolled illegal immigration: Nonimmigrant alien visitors who are admitted for temporary periods of time and stay longer than permitted.

A report issued by three Yale-affiliated researchers in September 2018, estimates that there are 22.1 million undocumented aliens in the United States, and that approximately 9 million of them (41 percent) entered as nonimmigrant visitors and overstayed their admission periods.

Many countries have border walls. There were only seven border walls or fences in the world at the end of World War II, but there are at least 77 of them now.

David Frye explains in his book, Walls: A History of Civilization in Blood and Brick, that barriers to keep others out are as ancient as human civilization.

The main argument against putting one on the Mexican border is that a dramatic drop in the apprehension of illegal crossers proves that we already have good border security there.{mosads}

From the 1980s to the mid-2000s, the government annually apprehended between 1 and 1.6 million illegal crossers at that border. But annual apprehensions have been below a million since fiscal 2007, and they were down to 303,916 in fiscal 2017.

Are apprehensions a reliable way to estimate how many illegal crossings are occurring? Would you accept a decline in the apprehension of drug smugglers as proof that fewer drugs are being smuggled across the border, or would you wonder whether the drug smugglers had found better ways to cross without being detected?

Realistically, we have no way of knowing how often drugs or undocumented aliens are smuggled across the border without being detected.

We do know, however, that 7,216 people died while illegally crossing the southwest border at remote locations in the 20-year period from fiscal 1998 to fiscal 2017. Most of them perished in the desert from dehydration, hypothermia, or heatstroke.

No one knows how long the overstays will remain.

According to the Dept. of Homeland Security (DHS) Fiscal Year 2017 Entry/Exit Overstay Report, 52,656,022 nonimmigrant departures were expected in fiscal 2017, and there were 701,900 overstays. These figures are limited to aliens who were admitted to the United States at air and sea ports of entry. DHS does not have much data on entries or exits at land ports of entry.

Moreover, the overstay estimates are based on “events,” the number of expected departures, not the number of aliens who were expected to depart that year. According to a Center for Immigration Studies (CIS) analysis of the report, this makes the overstay rates deceptively low.{mossecondads}

Using the DHS methodology, if 10 nonimmigrant visitors each comes to the U.S. three times during the fiscal year being considered, that would result in each having three expected departure dates, for a total 30 departure dates. If they all leave when they are supposed to leave but an additional visitor who makes only one visit overstays, the overstay rate would be 1/31 entries, or about 3 percent.

But if the overstay rate were based instead on the number of people who were expected to make a departure, the rate in the example above would be 1/11, which would be 9 percent. 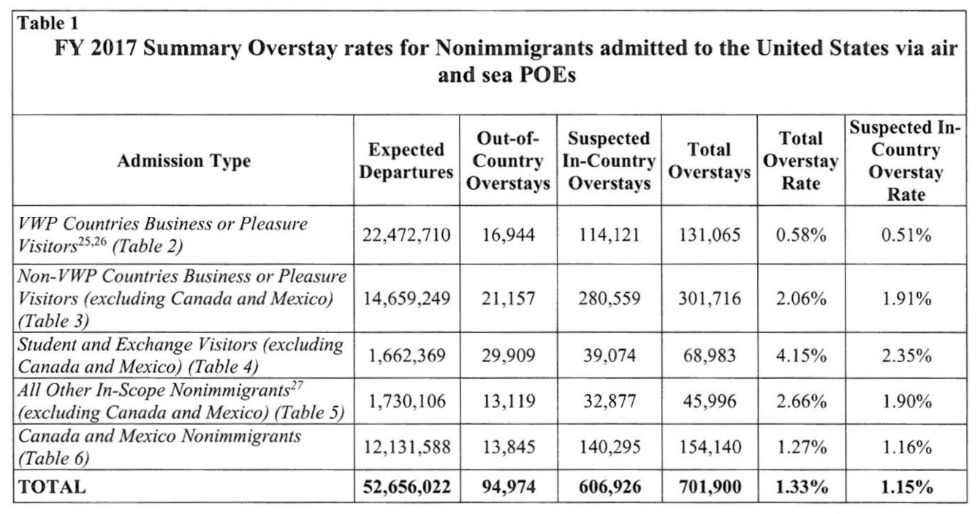 Overstays can be removed quickly when they have been apprehended.

Many of them come under the provisions of the Visa Waiver Program (VWP), which allows eligible nationals from 38 VWP countries to enter the United States for 90 days as nonimmigrant visitors for business or pleasure without a visa.

If a VWP alien does not leave at the end of his admission period, he can be sent home on the order of a district director without a hearing before an immigration judge, unless he applies for asylum or withholding of removal.

There is a one-year time limit on applying for asylum, and withholding just prohibits sending the alien to the country where he would face persecution — It does not permit him to remain in the United States.

Removal of overstays who enter with a visa requires a hearing before an immigration judge, but the government’s burden of proof can be met by establishing that the person was admitted to the United States as a nonimmigrant visitor and that the period authorized for the visit has expired.  This often can be handled very quickly at a Master Calendar Hearing if the alien does not want to apply for asylum or withholding.

If Trump wants effective border security, he cannot just erect a wall along the Mexican border.  He also has to reduce the number of overstays.

How creative and compassionate reforms can expand US work permits

Where is the accountability? Alleged abuses persist in ICE detention

by Sarah Paoletti and Azadeh Shahshahani, Opinion Contributors 2 weeks ago
Immigration  /  2 weeks ago
See All