It’s not North Korea’s nuclear weapons or Iran’s attempts to get its own that ranks as the most critical threat facing the United States. Nor is it Russia’s influence in U.S. elections or China’s rise as a superpower. Instead, It’s political polarization, according to a new survey of nearly 600 foreign policy opinion leaders by the Chicago Council on Global Affairs and the Texas National Security Network.

Not only was partisanship viewed as the highest threat overall, but it was also consistently high among Democrats, Republicans, and Independents, making it nearly unique among the threats assessed in the survey. On the danger partisanship poses to the United States, at least, there is a bipartisan consensus.

Yet there is a great deal of daylight between Republicans and Democrats on other possible threats. For example, Republican opinion leaders are much more likely than Democratic or Independent leaders to consider Iran’s nuclear program and the rise of China a critical threat. Democrats are much more likely to view Russian influence in US elections and the decline of democracy around the world as critical threats.

While several GOP political ads played up the dangers of immigrants crossing US borders, relatively few among even GOP experts consider immigration a critical threat.

North Korea’s nuclear program is the only threat other than partisanship to earn notable levels of concern across political affiliation. 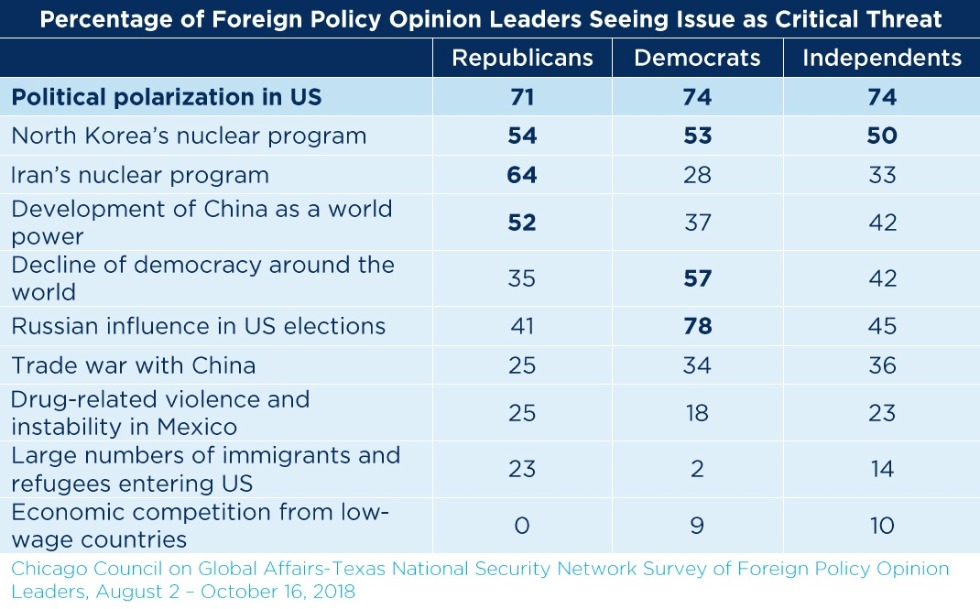 While political polarization is a top threat for leaders, it is a lesser, but still substantial, concern for the American public. A July 12-31, 2018 Chicago Council on Global Affairs survey of the US public found that 50 percent of Americans consider political polarization a critical threat, behind only international terrorism (66 percent), and North Korean (59 percent) and Iranian (52 percent) nuclear programs.

The comparatively greater sense of alarm among foreign policy leaders versus the public about the threat presented by polarization may reflect leaders’ greater awareness of how polarization is eroding America’s international standing and weakening its ability to address various global challenges.

As with substance abuse and other addictions, identifying the problem is the first step toward remedying it.

The good news is that foreign policy leaders and much of the public express deep concern about rising polarization. As the United States moves on from a highly divisive election, the key challenge facing Americans is to go beyond giving lip service to the problem. This will require rewarding leaders who engage in civil discourse and seek to work across the aisle, rather than employing hateful rhetoric and partisan attacks that sharpen political divisions.

Joshua Busby is an associate professor of Public Affairs at the University of Texas at Austin. Follow him on Twitter @busbyj2.

Jordan Tama is Associate Professor in the School of International Service at American University. Follow him on Twitter @ProfJordanTama.