3-D printing’s economic benefits are too big to ignore

Over the next 10 years, 3-D printing can realistically add more than 3 million jobs to the United States economy and deliver more than $600 billion in total economic value.

These are the key findings of a comprehensive analysis recently completed by A.T. Kearney, in cooperation with Penn State University’s Center for Innovative Materials Processing through Direct Digital Deposition (CIMP-3D).

Our analysis sought to gauge the potential economic benefits of 3-D printing. The resulting study, “3D Printing and The Future of The U.S. Economy,” pursued two closely connected lines of inquiry.

We surveyed more than 100 executives with affirmed knowledge of 3-D printing and found that nearly all (96 percent) believe that 3-D printing has potential to promote onshoring of manufacturing. More than two-thirds see “some” or “high” onshoring potential.

These findings are consistently confirmed by executives our teams have interviewed as participants in “Shaping The Future of Production,” a World Economic Forum global initiative. Our executive research also suggests that 3-D printing will have the greatest near-term impact in five sectors: industrials, automotive, consumer products, health care/medical and aerospace.

To calculate the total economic value, the U.S. might realistically gain using 3-D printing across those five sectors, we next referenced various macroeconomic data compiled by a range of authoritative sources, including the U.S. Bureau of Economic Analysis, the National Association of Manufacturers, the U.S. Bureau of Labor Statistics and the Organization for Economic Cooperation and Development. 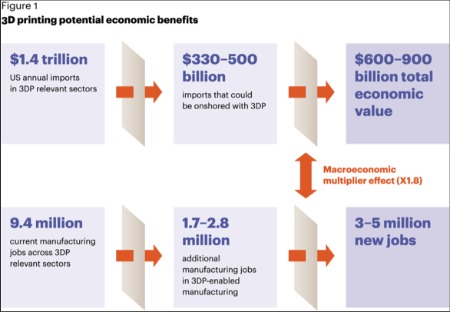 A significant component of the resulting projection is the macroeconomic multiplier effect (MME), by which a gain in one form of economic value causes economic stimulus in related areas (e.g., professional services, finance and insurance, retail).

Our review of relevant research by the National Association of Manufacturers suggests that the adjacent benefits of 3-D printing will be substantial. Accordingly, we applied an MME factor of 1.8X.

As important, our analysis strongly suggests that the jobs 3-D printing could add to the U.S. economy would include many roles requiring considerable skill, thus warranting relatively high levels of compensation. The improving economics of 3-D printing could soon make such a scenario both attainable and sustainable.

3-D printing’s economic potential is too big to ignore, while the cost of hastening that potential into economic reality seems comparatively small.

What Hurricane Ian shows us about news, real and manufactured

After NASA’s test to deflect asteroid threats, it’s time to better detect what is coming

by Tom Siegel, opinion contributor 5 days ago
Technology  /  5 days ago
See All

In hurricanes, more people die from indirect causes than the storms themselves