It’s Tuesday, welcome to Overnight Defense, your nightly guide to the latest developments at the Pentagon, on Capitol Hill and beyond. Subscribe here: thehill.com/newsletter-signup.

The Biden administration announced it would keep its Aug. 31 deadline to remove U.S. forces from Afghanistan, leaving little room to get thousands of Americans and Afghan allies out of the war-torn country before then.

We’ll examine President Biden’s decision, how it came up at his meeting with G-7 leaders, lawmakers’ calls for him to reconsider and how evacuations are going. 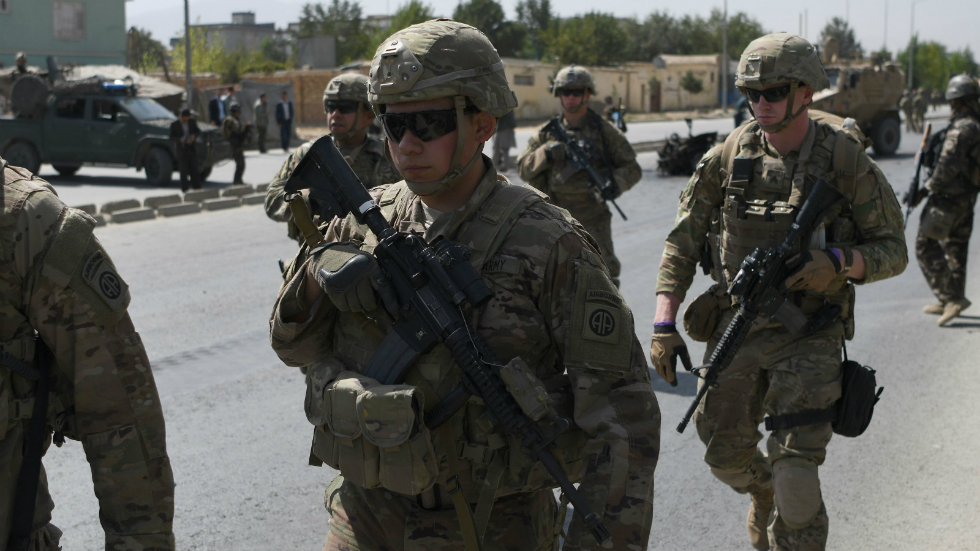 President Biden does not plan to extend the Aug. 31 deadline for withdrawing all U.S. troops from Afghanistan, he announced Tuesday.

“We are currently on a pace to finish by Aug. 31,” Biden said at the White House. “The sooner we can finish the better. Each day of operations brings added risk to our troops.”

Stipulations: Biden added that a completion by Aug. 31 “depends upon the Taliban continuing to cooperate and allow access to the airport” for Americans and Afghans seeking to leave the country.

He said he has asked the Pentagon and the State Department for contingency plans should the situation change and more time is needed.

Meeting with leaders: Biden earlier on Tuesday held a virtual call with other Group of Seven (G-7) leaders, some of whom had advocated for the president to extend the mission into September so vulnerable Afghans could be safely evacuated.

But Biden said the leaders agreed with his decision to keep the deadline, due to possible terrorist attacks on U.S. and allied forces and Afghan civilians should they stay any longer.

“We run a serious risk of it breaking down as time goes on,” he said.

A reversal: The president has previously said U.S. forces would remain in Afghanistan into September if needed to bring all Americans home, but he has expressed optimism an extension would not be necessary.

The U.S. military ramped up evacuations in Afghanistan on Monday, flying out roughly 12,700 people on 37 flights, the largest single day of airlifts out of the country.

In total, approximately 21,600 people were evacuated from Afghanistan during the 24-hour period between early Monday and early Tuesday, a White House official said, including 8,900 people who were transported on 57 coalition flights.

Since Aug. 14, the U.S. has evacuated or facilitated the evacuation of about 70,700 people, Biden said later at the White House.

How many Americans?: The United States has evacuated approximately 4,000 of its passport holders plus their families from Afghanistan, the Pentagon confirmed Tuesday.

“We expect that number to continue to grow in the coming days,” Defense Department press secretary John Kirby said in a statement.

Until Tuesday, the Biden administration remained vague on the number of Americans it had evacuated from the war-torn country, saying only that it was several thousand.

Update Coming: Several thousand more Americans are estimated to still be in Afghanistan, though the administration has not released an official number.

Biden said the State Department would update the public on that figure on Wednesday.

Lawmakers push back over Afghanistan deadline 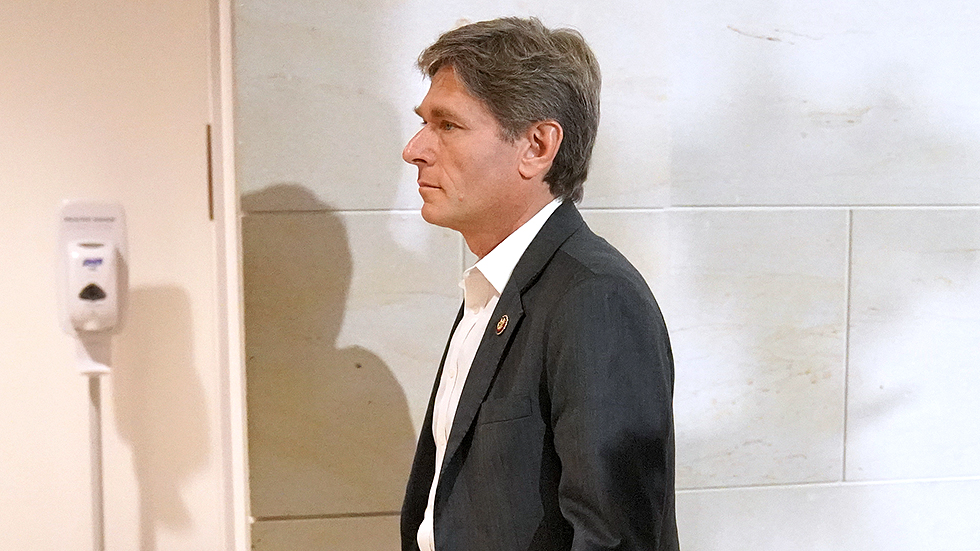 Democrats and Republicans alike on Tuesday called on Biden to push back his deadline, saying sticking to it risked leaving U.S. allies behind.

“There has been and remains an overwhelming bipartisan consensus that this cannot be done by Aug. 31,” Rep. Tom Malinowski (D-N.J.), a member of the House Foreign Affairs Committee who served as a senior State Department official during the Obama administration, said following a classified briefing for House lawmakers.

How many are still left?: But more than 100,000 people may be seeking to evacuate. The administration has acknowledged it does not know how many Americans are in Afghanistan because some people do not tell the embassy when they have entered or exited the country.

In agreement: Rep. Elissa Slotkin (D-Mich.) said Biden should hear the message from a “large bipartisan group of members” to reconsider the Aug. 31 deadline.

“There was bipartisan support for extending the August 31 deadline including applause when that was raised and a strong feeling that we wanted the cabinet secretaries in the room to advocate vicariously with the president to that end,” she said.

Rep. Chris Smith (R-N.J.), echoed that he wanted top Biden aides to push the president to back off the end-of-the-month deadline, saying, “I want him [Biden] to listen to his advisers.”

And Rep. Susan Wild (D-Pa.), who urged Biden in a letter Tuesday with 13 other colleagues to extend the deadline, said Democrats and Republicans are in lockstep on the issue.

Leaders of the nations included in the Group of Seven (G-7) on Tuesday said the Taliban is responsible for preventing terrorism, respecting human rights and working toward a peaceful solution in Afghanistan.

The leaders made the statement in a joint release, marking the first time the international community has recognized the insurgent, Islamic fundamentalist group.

Timing: The G-7 statement came following an emergency meeting convened by the United Kingdom and is part of an effort to unite allies on global strategy toward Afghanistan.

The meeting also came amid increasing tension between international allies and Biden, who has doubled down on completing U.S. military evacuations by Aug. 31.

Who was in on the meeting?: The joint statement sought to project unity among leaders of the G-7, a grouping of the most advanced economies in the world, comprising the U.S., Canada, U.K., France, Germany, Italy and Japan. Top officials from the European Union and NATO also joined the meeting.

A first: The statement marked the first time that the group of nations identified the Taliban by name when addressing Afghanistan, singling out the group that took control of Kabul on Aug. 15 as responsible for preventing terrorism; respecting human rights for women, girls and minorities, in particular; and pursuing negotiations for an inclusive Afghan government.

“In particular, we reaffirm that the Taliban will be held accountable for their actions on preventing terrorism, on human rights in particular those of women, girls and minorities and on pursuing an inclusive political settlement in Afghanistan,” the statement read.

No acknowledgement yet: The international community has so far withheld acknowledging the Taliban as Afghanistan’s legitimate ruler, with the Biden administration stressing that a transfer of power has not yet taken place. The U.S., along with allies, have urged a negotiated political solution to create an inclusive Afghan government that includes women and is accepted by the population.

“The legitimacy of any future government depends on the approach [the Taliban] now takes to uphold its international obligations and commitments to ensure a stable Afghanistan.”

‘Dire’ conditions at Doha base 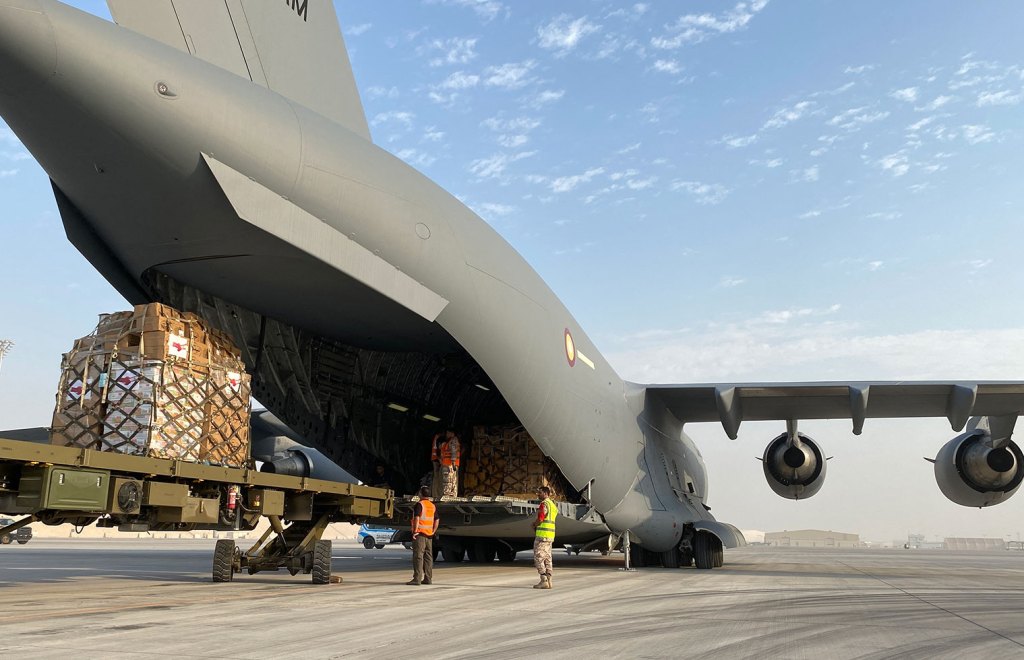 Afghan refugees have been living in “dire” conditions at a U.S. airbase in Doha, Qatar, the Pentagon acknowledged on Tuesday.

A U.S. Central Command official, supervisory special agent Colin Sullivan, on Friday sent an email to State Department and Pentagon officials with the subject line “dire conditions at Doha,” referring to the Al Udeid Air Base, according to leaked internal emails shared with Axios.

‘Of our doing’: In the email, Sullivan describes a “life-threatening humanitarian disaster … that I want to make sure all of you are fully tracking.”

Sullivan’s email further shared “excerpts from Doha Embassy staff communications” about conditions at the base.

“A humid day today. Where the Afghans are housed is a living hell. Trash, urine, fecal matter, spilled liquids and vomit cover the floors,” one communication read.

Pentagon comments: The Pentagon later on Tuesday acknowledged “what had been some terrible conditions” at the air base, according to press secretary John Kirby.

“We are aware of and as concerned as anybody about what had been some terrible sanitation conditions at Qatar that were facilitated by the sheer numbers and the speed with which those numbers got there,” Kirby told reporters. “We all recognize that, and nobody, nobody here wants anyone to be less than safe, secure, comfortable and well cared for as they go through this process.”

Improving, not perfect: Kirby said the conditions are “improving” but not perfect, and that the U.S. military is working to identify other temporary locations to send evacuees to “ease the pressure” at the base.

“We’ll be the first to admit that conditions at Al Udeid could have been better. They are improving now,” Kirby said. “I’m not going to stand up here and tell you that they’re perfect, because they’re not, because evacuees continue to flow into Qatar, and there’s a lot on the ground right now, and . . . we’re working hard to clear out that population so we can ease the pressure there and continue to move these people along their way to their new lives.”

That’s it for today. Check out The Hill’s defense and national security pages for the latest coverage. We’ll see you Wednesday.