The House Armed Service Committee had it’s turn to question top Pentagon leaders in a hearing that revealed a number of new details about the decisions officials made in the days before and after the U.S. withdrawal from Afghanistan.

We’ll break down what new information was given, the arguments that broke out and what the White House had to say about it. 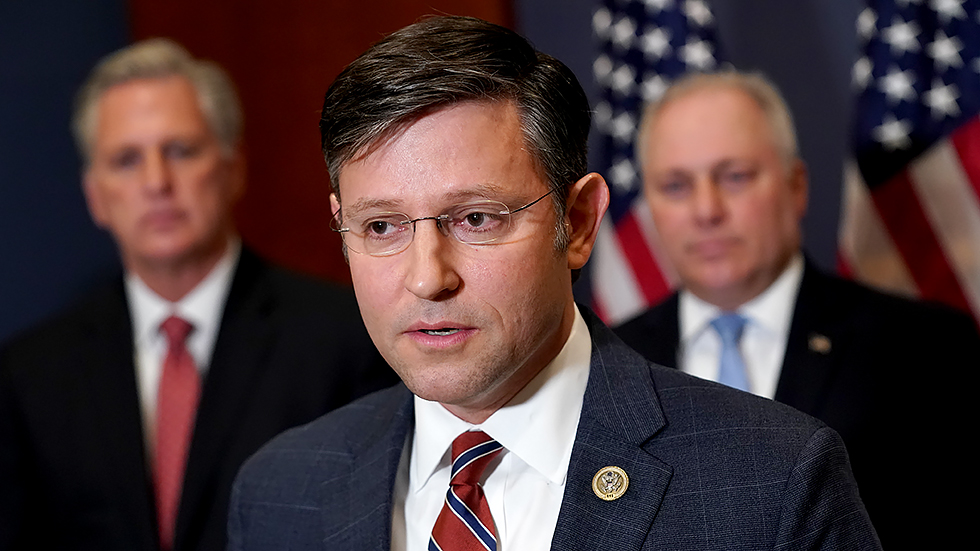 House lawmakers got their chance to grill the Pentagon’s top leaders on the disastrous withdrawal from Afghanistan, digging down into decisions Biden administration officials made before, during and after U.S. forces evacuated the country.

The questions yielded a number of surprising revelations, including news that the Taliban had offered the U.S. military the option to secure the entire city of Kabul while it was leaving, the fact that Joint Chiefs of State Chairman Gen. Mark Milley knew the conflict was a “stalemate” as far back as six years ago, and that the military leaders knew a deadly drone strike in Kabul had been a mistake days after it happened.

Calmer waters: But the House Armed Services Committee meeting was decidedly calmer than yesterday’s meeting in the Senate, with only a handful of flare-ups.

A bit choppy: The most heated moments of the hearing came as lawmakers continued to debate the extent to which Biden had been advised by his military leaders to leave 2,500 troops on the ground, relitigating an interview with ABC’s George Stephanopoulos.

U.S. Central Command head Gen. Frank McKenzie and Milley acknowledged during the public congressional testimony that they agreed with the recommendation of Army Gen. Austin Miller that 2,500 troops be left in the country, though they declined to detail what they advised Biden directly.

But Republicans seized on a portion of the interview where Biden said he did not recall anyone giving him that advice.

“Here’s the thing, there’s only three possibilities here: either the president lied to the American people, or he legitimately cannot remember the counsel of his top military advisors in winding down the longest war in American history, or you have not been fully accurate under oath,” Rep. Mike Johnson (R-La.) said to the three military leaders.

Smith takes a stand: The rehashed interview touched a nerve with Chairman Adam Smith (D-Wash.), who pushed back against what he saw as mischaracterizations of the president’s answer.

He also defended the trio’s actions in Afghanistan as well as Biden’s decision making.

“While we’re ripping apart these three gentlemen here, I want to remind everybody that the decision the president made was to stop fighting a war that after 20 years it was proven we could not win. There was no easy way to do that,” Smith said.

Read more about the exchanges here. 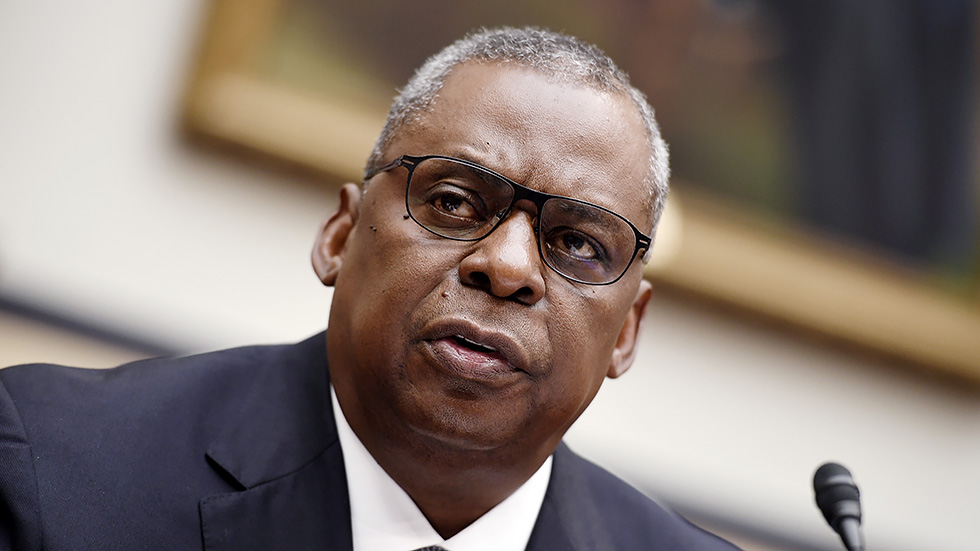 Defense Secretary Lloyd Austin on Wednesday blamed the State Department for the last-minute evacuation of allies from Afghanistan.

“The call on how to do that and when to do it is really a State Department call,” Austin said in response to a question from Rep. Jim Langevin (D-R.I.).

Why it’s important: The Biden administration has come under intense scrutiny for a chaotic withdrawal that left behind many Afghan allies, including those seeking a special immigrant visa (SIV) following their assistance to the U.S. military.

“Their concerns rightfully were that, No. 1, they were being cautioned by the Ghani administration that if they withdrew American citizens and SIV applicants at a pace that was too fast, it would cause a collapse of the government that we were trying to prevent. And so, I think that went into the calculus,” he said.

“A number of things kind of came together to cause what happened to happen. But again, we provided our input and we certainly would have liked to seen it go faster or sooner,” he said.

Lawmaker criticisms: For his part, Langevin criticized the Biden administration for waiting well into the withdrawal to begin its rushed evacuation

And Rep. John Garamendi (D-Calif.) said lawmakers had been given assurances from Ghani and other Afghan leaders they would be able to stabilize the country so long as there was not a massive exodus of Afghans. 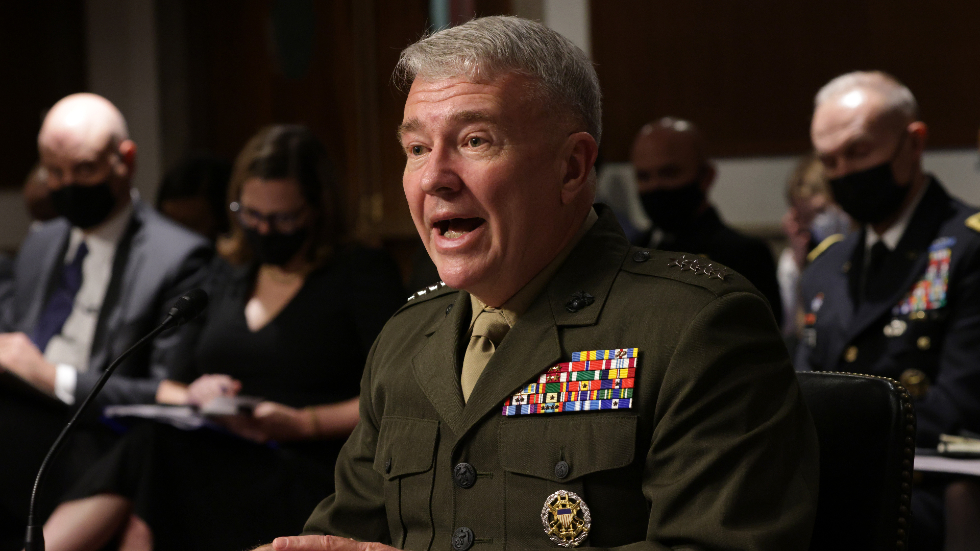 Also revealed during the House briefing, U.S. Central Command head Gen. Frank McKenzie acknowledged that the Taliban offered to let the U.S. military take over security for Kabul until it officially departed the country on Aug. 31.

McKenzie told the House Armed Services Committee during a hearing Wednesday that Taliban leaders made the offer during a conversation in Doha the day Afghanistan fell to the extremist group.

The general said he met the head of the Taliban’s political wing, Abdul Ghani Baradar, on Aug. 15 in Doha “to pass a message to him that we were withdrawing and if they attempted to disrupt that withdrawal we would punish them severely for that.”

The discussion: During the meeting, the Taliban offered to let the U.S. military secure Kabul, but McKenzie said agreeing to such an offer was not in his instructions and “we did not have the resources to undertake that mission.”

Asked whether the Taliban’s offer was conveyed to President Biden, McKenzie said he did not know, but added that U.S. Special Representative for Afghanistan Reconciliation Zalmay Khalilzad was present for the conversation.

Earlier: The Washington Post in late August reported that McKenzie, along with other senior U.S. officials, met in Doha with Baradar the day Afghanistan fell to the Taliban.

“We have two options to deal with it: You [the U.S. military] take responsibility for securing Kabul or you have to allow us to do it,” Baradar reportedly told McKenzie.

McKenzie told Baradar the U.S. mission was only to evacuate U.S. citizens and vulnerable Afghans and the military needed the airport to do that.

The two sides agreed the United States could have the airport until Aug. 31.

Why didn’t he take the offer?: On Wednesday McKenzie explained he did not consider the discussion with the Taliban “to be a formal offer” and it was not the reason he was in Doha. But, he added, the offer was conveyed to his chain of command.

Later in the hearing, McKenzie said he went to Doha to ask the Taliban to keep a distance of 30 kilometers from Kabul as “the best way to do deconfliction,” as districts in the country rapidly fell to the group.

But by the day of the meeting, the Taliban were already in downtown Kabul, so “we had to proceed from the new reality,” he said.

Gen. Mark Milley, the chairman of the Joint Chiefs of Staff, said Wednesday that he would never tip off an enemy to any “surprise” U.S. attack plans as he defended himself from Republican criticism over calls he made to his Chinese counterpart during the Trump administration.

A broader effort: Milley acknowledged that he told Gen. Li Zuocheng of China “I’ll probably give you a call” before the U.S. launched an attack against China, but he said the comment was part of a broader effort to tamp down Chinese fears about an imminent U.S. attack on orders of then-Defense Secretary Mark Esper.

“I’m not going to tip off the enemy about what the United States is going to do in an actual plan. What I’m trying to do is persuade an adversary that is heavily armed that was clearly and unambiguously according to intelligence reports very nervous about our behavior and what was happening inside this country and they were concerned that we, President Trump was going to launch an attack. He was not going to launch an attack,” Milley told the House Armed Services Committee during testimony Wednesday.

‘I would never’: “At the direction of the secretary of Defense, I engaged the Chinese in order to persuade them to do that. I would never tip off any enemy to any kind of surprise thing that we were going to do. That is a different context than that conversation,” Milley added.

About that other call: Earlier during Wednesday’s hearing, Rep. Vicki Hartzler (R-Mo.) asked Milley if reports were true that he told Li he would give him a call before a U.S. attack in a call last year. The calls between Milley and Li, which took place on Oct. 30 and Jan. 8, were recently revealed in the book “Peril.” 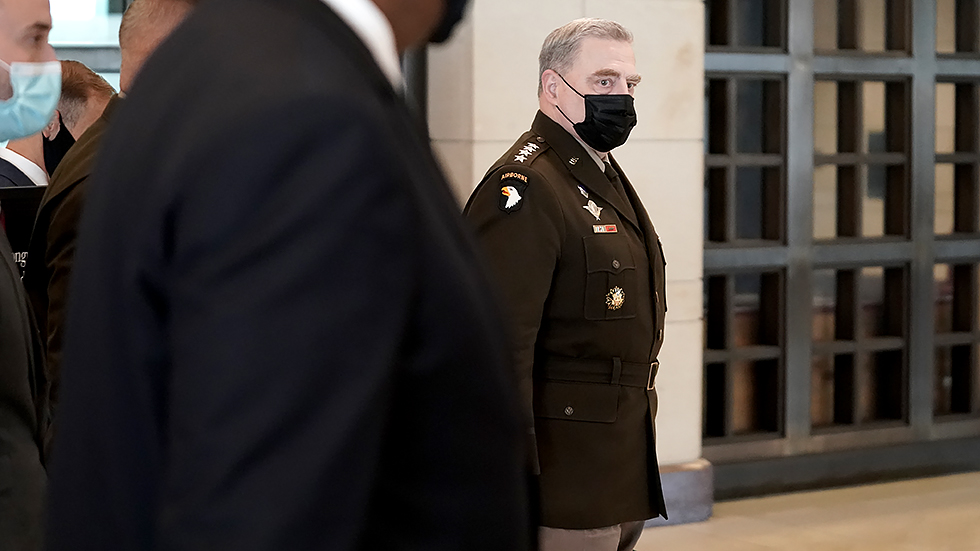 Milley also said Wednesday said there is “a real possibility” that al Qaeda or ISIS could reconstitute in Afghanistan as soon as early spring 2022.

Milley said the terrorist threat from Afghanistan is currently less than it was on 9/11, but that “the conditions could be set for a reconstitution of al Qaeda and/or ISIS.”

“It’s a real possibility in the not too distant future, six, 12, 18, 24, 36 months, that kind of time frame, for reconstitution of al Qaeda or ISIS,” he told lawmakers at a House Armed Services Committee hearing.

In agreement: Secretary of Defense Lloyd Austin, who testified alongside Milley, agreed with the comments, saying “there is clearly a possibility” for the groups to build back up with U.S. forces out of the country.

“Al Qaeda has been degraded over time. Now, terrorist organizations seek ungoverned spaces so that they can train and equip and thrive and, and so, there is clearly a possibility that that can happen here, going forward,” he said. “Our goal is to maintain a laser-like focus on this so that it doesn’t happen.”

Read more on what was said here.

That’s it for today. Check out The Hill’s defense and national security pages for the latest coverage. See you Thursday.

GOP divided over whether heckling Biden hurts them