Multiple Western officials have said they’ve seen no effort to reduce Russian forces near the country’s border with Ukraine, as Moscow has said was the case. Instead, U.S. leaders said they’ve observed Russia adding thousands more of its troops to an already tense situation.

We’ll break down the latest reports coming out of the White House and Europe, plus unsafe encounters between NATO and Russian jets over the Mediterranean and the Senate’s warning shot to Moscow.

US says Russia has added 7,000 troops

“We have now confirmed that in the last several days, Russia has increased its troop presence along the Ukrainian border by as many as 7,000 troops, with some arriving as recently as today,” the official told reporters on a call Wednesday evening.

“Every indication we have now is they mean only to publicly offer to talk and make claims about de-escalation while privately mobilizing for war,” the official said, adding that the U.S. is receiving indications that Russia could launch a false pretext to justify an invasion of Ukraine “at any moment.”

Earlier promises: The comments directly challenge Russian statements about pulling back some forces and being willing to engage in diplomacy over the past 24 hours.

U.S. and European officials have said they have seen no signs of Russia de-escalating the situation, despite a statement by Russia on Tuesday that it was pulling back troops.

Blinken’s assessment: “We continue to see forces, especially forces that would be in the vanguard of any renewed aggression against Ukraine, continuing to be at the border, to mass at the border,” Secretary of State Antony Blinken said during an appearance on ABC’s “Good Morning America” on Wednesday.

Read more on that here.

Morning, Noon, and Night. Be among the first to receive The Hill’s Evening Report. Sign up here.

US WARNS ‘SWIFT AND FIRM RESPONSE’

Blinken also on Wednesday warned of a “swift and firm response” from the U.S. and its allies if Russian President Vladimir Putin moved to recognize territories in eastern Ukraine that have been locked in conflict since 2014 as “independent.”

Blinken said that an appeal from the State Duma, Russia’s lower house of parliament, for Putin to recognize the Donetsk and Luhansk regions in eastern Ukraine as independent would violate the Minsk agreements, an international effort agreed to in 2015 to end fighting between Ukrainian forces and Russian-backed separatists in the region.

“Enactment of this resolution would further undermine Ukraine’s sovereignty and territorial integrity, constitute a gross violation of international law, call into further question Russia’s stated commitment to continue to engage in diplomacy to achieve a peaceful resolution of this crisis,” Blinken said, adding that such a move would “necessitate a swift and firm response from the United States in full coordination with our Allies and partners.”

Raising the cost: Blinken’s statement appears to raise the cost on Russia by laying out further how the U.S. and allies could respond to defend Ukraine’s sovereignty short of the risk of a large-scale Russian invasion.

Russia recognizing the territory as independent could provide the Kremlin with a pretext to send Russian soldiers into the region to aid an ally. Russia has reportedly provided an estimated 600,000 Russian passports to residents in the area, provided COVID-19 relief, financial aid, covert military support and has an estimated 2,000 of its own forces in the region, although the Kremlin denies this.

Read more of today’s coverage on the situation here: 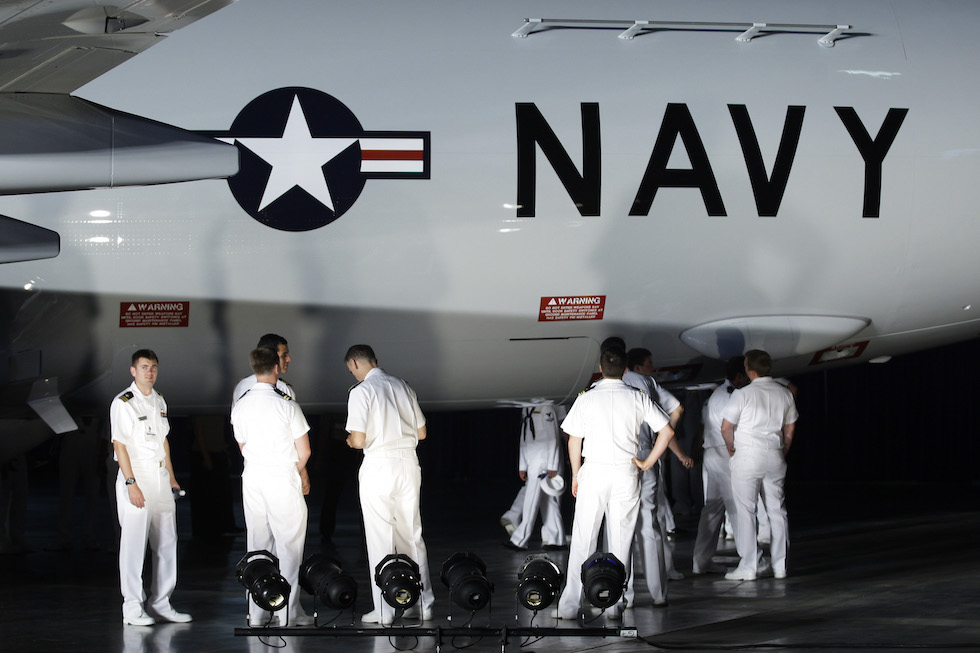 U.S. Navy Capt. Mike Kafka, director of Defense Press Operations, said in a statement to The Hill that the three Navy P-8A Poseidon aircrafts were flying in international airspace over the Mediterranean when the intercepts occurred.

“We have made our concerns known to Russian officials through diplomatic channels,” he said. “The US will continue to operate safely, professionally and consistent with international law in international waters and airspace. We expect Russia to do the same.”

Close encounters: It was unclear from the statement what exactly occurred over the weekend and where in the Mediterranean the encounters happened.

CNN, citing multiple US officials familiar with the incident, reported that one Navy aircraft had an “extremely close” encounter with multiple Russian military jets, followed by a subsequent encounter.

ABC News separately reported that in one incident, Russian aircraft came within 5 feet of an American aircraft.

Ongoing drills: Russia is currently conducting military drills in Mediterranean, part of ongoing large-scale drills. According to a statement from Russia’s Ministry of Defense released Tuesday, those drills involve more than 15 warships and 30 aircraft.

The message: “Should Vladimir Putin further escalate his ongoing assault on Ukraine’s sovereignty, Russia must be made to pay a severe price. We are prepared to fully support the immediate imposition of strong, robust, and effective sanctions on Russia, as well as tough restrictions and controls on exports to Russia, and we will urge our allies and partners in Europe and around the world to join us,” the senators said.

“The international order established in the aftermath of World War II has not faced such a grave threat since the Cold War. This order, which protects the sovereignty and territorial integrity of nations, has enabled an unprecedented era of peace and prosperity for the United States and its allies. Unfortunately, Russia is threatening this system, and the United States is prepared to meet this challenge with bipartisan and unified resolve,” they added.

The senators also reiterated their support for Ukraine, including economic, security and humanitarian assistance.

Still unresolved: The statement comes as hopes dim of passing sanctions legislation before senators leave town as soon as Thursday for a one-week break.

Senate Republicans — led by Sen. James Risch (Idaho), the top Republican on the Foreign Relations Committee — introduced their own sanctions bill on Tuesday, with Foreign Relations Committee Chairman Bob Menendez (D-N.J.) accusing Republicans of choosing “partisan posturing instead of working to reach consensus on a comprehensive bipartisan proposal that would demonstrate a united front to deter Putin from re-invading Ukraine.”

Though Risch and Menendez were optimistic they could reach an agreement on financial penalties on Moscow, they hit roadblocks amid deep disagreements on secondary sanctions related to Russia’s banks, which could have broader impacts across Europe, and what to do about Nord Stream 2, the pipeline that would carry natural gas from Russia to Germany.

Well, that’s it for today! Check out The Hill’s defense and national security pages for the latest coverage. See you on Thursday.