Russian forces as of Monday evening had yet to take any major Ukrainian city, but U.S. officials warned Moscow will likely switch to more brutal means to accomplish its goal of toppling Kyiv’s government.

We’ll detail what the Pentagon is warning and where the Ukraine-Russia ceasefire talks stand, plus Washington’s move to oust Moscow’s diplomats and who is part of a new delegation being sent to Taiwan.

Russian forces slowed but not stopped 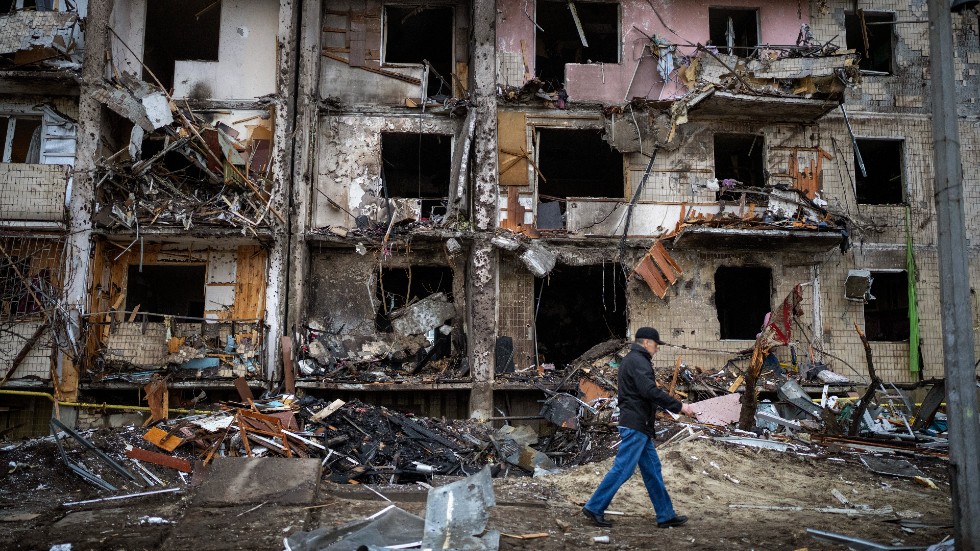 Russian forces are frustrated they have not yet taken the capital city of Kyiv, which could lead them to take a “more aggressive approach” militarily, a senior U.S. defense official said Monday.

“They have been slowed and they have been frustrated by their lack of progress on Kyiv,” they said. “One of the things that that could result in is a reevaluation of their tactics and the potential for them to be more aggressive and more overt, in both the size and scale of their targeting of Kyiv.”

Pouring in troops: Russian President Vladimir Putin so far has sent into Ukraine “just under 75 percent” of the more than 150,000 troops he had assembled for the assault, and forces have fired more than 380 missiles, the official said.

The Russians are “running out of gas and they’re having logistics problems” on the way south to Kyiv, meeting with significant Ukrainian resistance.

The plan: Still, Kremlin forces are roughly 16 miles away from the capital city, which they hope to encircle, according to the official.

“We do believe that their plans are to encircle the city and they try to take it that way because that has really been where the heaviest fighting has been,” they said.

Reports emerged earlier Monday that Belarus is preparing to send troops into Ukraine in support of the Russian invasion which began last week. 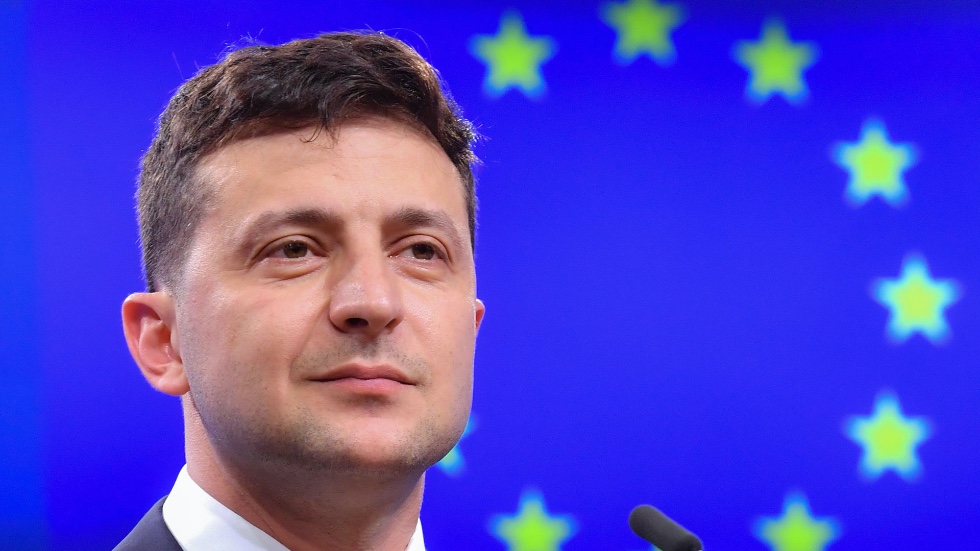 Cease-fire talks between Ukrainian and Russian officials began on Monday, several days into the invasion, but concluded with no immediate agreements.

Ukrainian presidential adviser Mykhailo Podolyak told Reuters in a text message that the cease-fire talks, which are taking place on the Belarusian border, had started.

Ukrainian President Volodymyr Zelensky’s office previously said that Kyiv had the goal of reaching a cease-fire and compelling Russian forces to leave Ukraine.

The Kremlin, however, refused to comment on Moscow’s goals going into the talks.

Where they happened: Zelensky recently confirmed to Sky News that Russia and Ukraine would participate in peace talks on the border of Ukraine and Belarus. He had initially rejected an earlier request that discussions take place in Belarus, where some Russian troops invading Ukraine had been held.

More than half a million Ukrainians flee 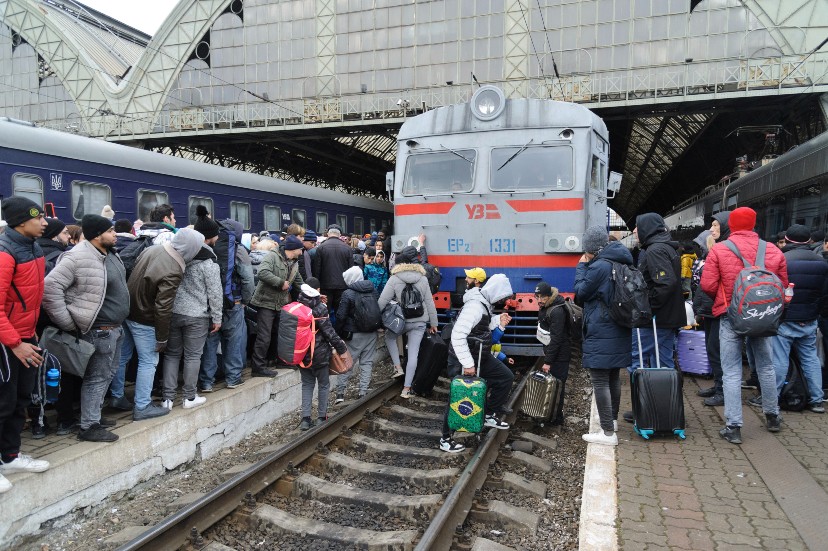 As fighting continues, some 520,000 Ukrainians have fled their home since the start of Russian invasion, the U.N. High Commissioner for Refugees said Monday, adding that refugee totals are expected to run in the millions, taxing the resources of neighboring counties.

The figure has grown 10 times in just last week, when the U.N. High Commissioner for Refugees on Friday estimated that 50,000 Ukrainians had left the country. Russia launched its invasion on Feb. 24.

“This figure has been rising exponentially hour after hour, literally since Thursday. I have worked in refugee crises for almost 40 years, and I have rarely seen such an incredibly fast rising exodus of people,” Commissioner Filippo Grandi said in a speech before the U.N. Security Council.

Other estimates indicate as many as 100,000 Ukrainians may be internally displaced.

The Biden administration on Monday announced it would be revoking diplomatic privileges for a dozen Russian spies accused of carrying out espionage under the cover of diplomacy.

“The U.S. has informed the Russian Mission that we are beginning the process of expelling 12 intelligence operatives from the Russian Mission who have abused their privileges of residency in the U.S. by engaging in espionage activities that are adverse to our national security,” said Olivia Dalton, spokeswoman for the U.S. ambassador to the United Nations.

Timing: While Dalton said the move to expel the operatives from their U.N. diplomatic posts had been in process for months, it falls amid heightened tensions with Russia amid its invasion of Ukraine.

A hostile act: Asked about the Russian ambassador to the U.S. characterizing the step as hostile, White House press secretary Jen Psaki said the move was a direct response to Russian activity.

“I think the hostile act is committing espionage activities on our own soil,” she said.

Earlier: Russia expelled the No. 2 diplomat from the U.S. from Moscow earlier this month, revoking privileges for Deputy Chief of Mission Bart Gorman.

“We consider this an escalatory step,” the State Department said at the time.

The U.S. and Russia have had an ongoing spat over diplomatic privileges.

Russia in December ordered all U.S. Embassy staff that had been in the country for more than three years to leave after the U.S. removed privileges for 27 Russian diplomats and their families after imposing a three-year timeline for diplomats. 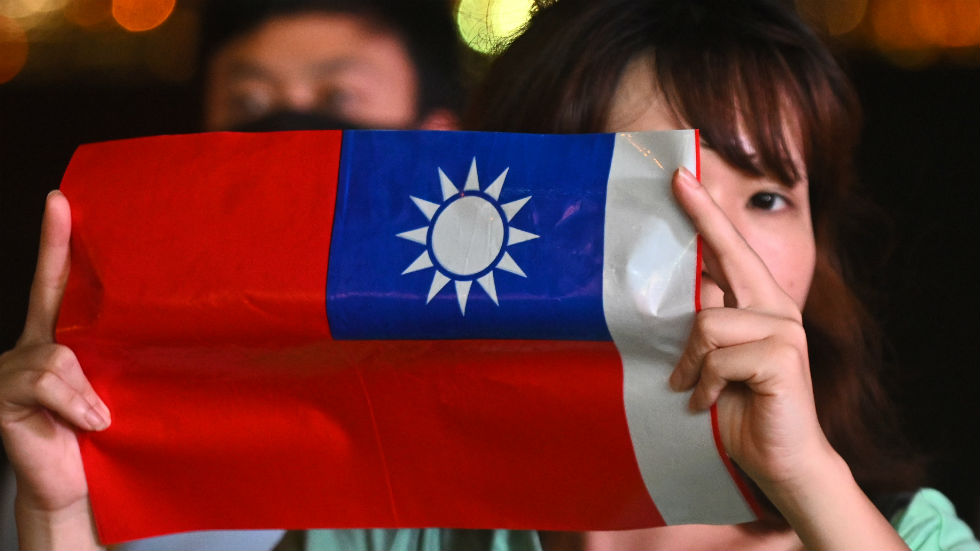 President Biden is sending a delegation of former defense and national security officials to Taiwan this week in a show of support.

Who is going: The delegation, led by former Joint Chiefs of Staff Chairman Adm. Mike Mullen, will leave Tuesday afternoon and stay until Wednesday, a senior administration official told Reuters.

Mullen will be joined by former deputy national security adviser Meghan O’Sullivan and former Under Secretary of Defense Michele Flournoy. Also expected to go are Mike Green and Evan Medeiros, both of which were senior directors for Asia on the National Security Council.

Who they’ll meet: The group is expected to meet with top Taiwanese officials, including President Tsai Ing-wen and Defense Minister Chiu Kuo-cheng.

Bi-khim Hsiao, Taiwan’s representative to the U.S., confirmed the visit on Twitter, saying “welcoming this gesture of strong bipartisan support for Taiwan.”

More provocations: The trip comes as China, which sees Taiwan as part of its own territory, steps up its provocations against Taipei. Last week, Taiwan’s defense ministry reported that nine Chinese aircraft entered its air identification zone.

The U.S. adheres to the 40-year-old “One China” policy, in which it recognizes Beijing as the sovereign authority over China, including Taiwan. But Washington maintains informal ties with Taipei and is legally obligated to ensure that it can defend itself in the face of an attack.

Former Secretary of State Mike Pompeo is also expected to travel to Taiwan this week, where he will meet with Taiwan’s foreign minister and give a speech at a think tank.

ON TAP FOR TUESDAY

That’s it for today! Check out The Hill’s defense and national security pages for the latest coverage. See you Tuesday.